CHAPTER FIVE: THE FOOLS ON THE ROYAL HILL 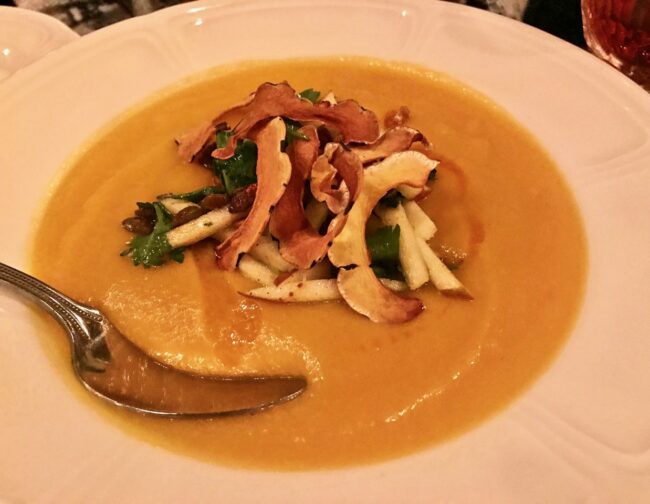 CHAPTER FOUR: DINNER BY THE PORT

We had a number of terrific meals on our trip to Canada, and one that really stood out took place at Caffe Un po Di Più.  Located in the Vieux-Port de Montréal (Old-Port of Montréal), Un po di Più serves Italian small plates to be shared.  From Hotel Gault, it was a short ten-minute stroll. (Two photos below from internet) 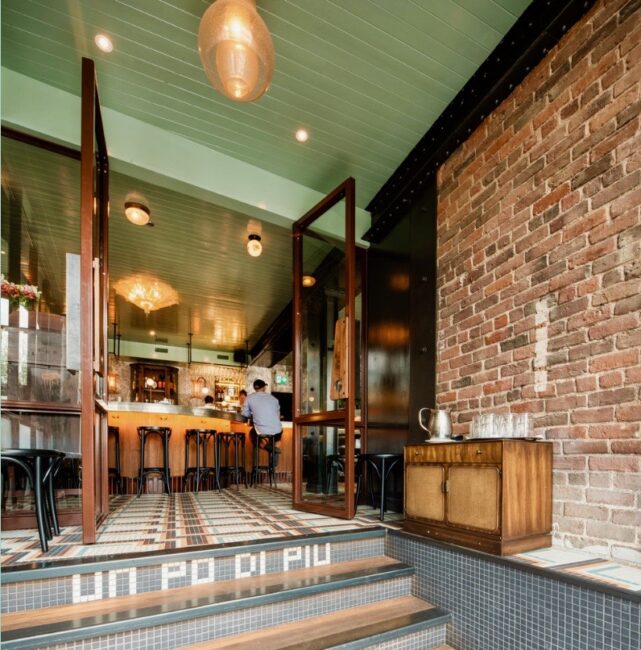 Un po di Più (“A Little More”) opened in 2018 and is a creation from the same folks who brought Olive et Gourmando to Montréal, the restaurant where we picked up breakfast almost every morning on our trip – exceptional fresh baked pastries. 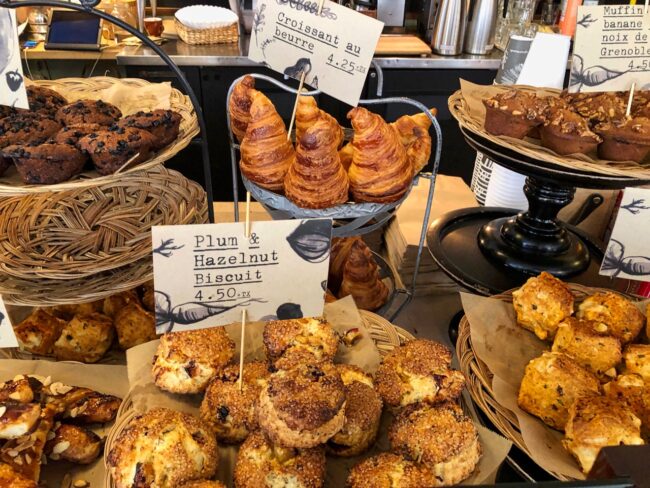 The interior of Un po Di Più can be summed up in two words … “cozy” and “elegant.” From the curved bar seen upon entering to the interior design, you feel right at home at Un po di Più. We were seated at a window table on a warm, starry evening. It was a great start to a perfect dinner. 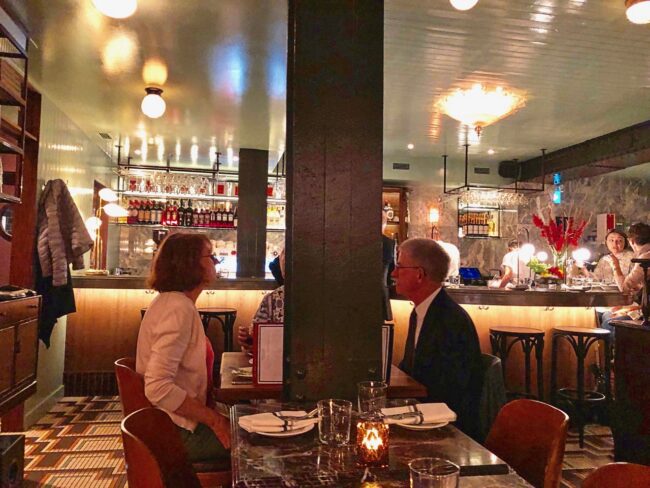 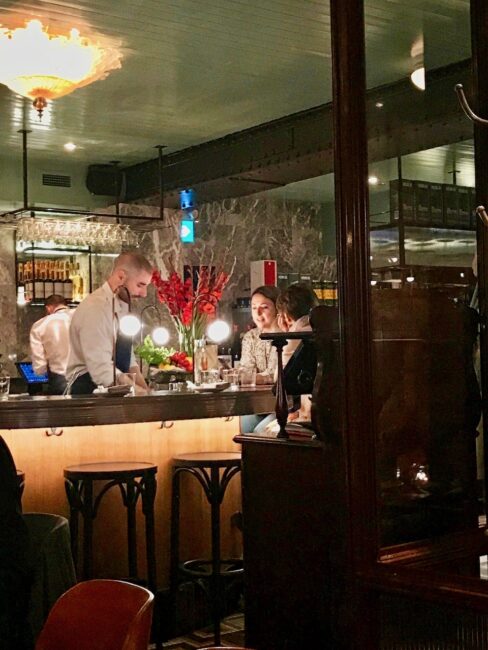 The only main menu item we originally decided to share was a platter of aged prosciutto di Parma and plums with focaccia bread (C$15). I believe I could live on prosciutto, and the plums were a surprising, and delicious, complement to the dish. 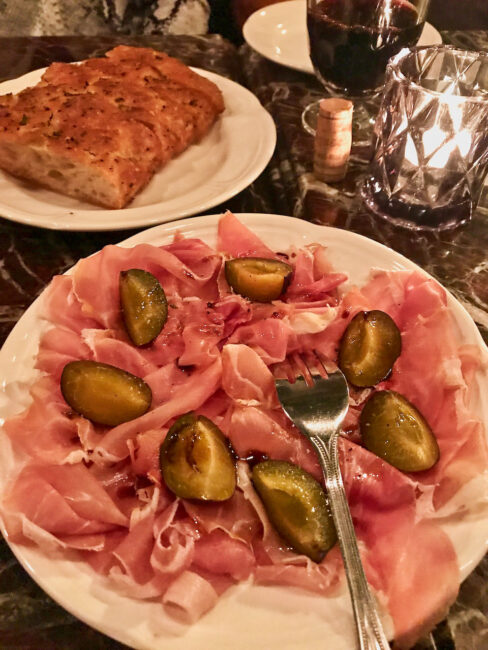 Our server was quite knowledgable about the wine list and let us sample a couple to make sure we picked bottles we enjoyed … and we did.

Mary started with the Soupe du Moment, which was a carrot, butternut squash soup with pears, toasted pumpkin seeds, dried squash and parsley (C$14).  “Wow!” … what a start.  She followed that with another “Wow!” dish, the carrot zucchini gnocchi with dill sauce (C$22).  The rest of us had been put off by the dill sauce, but it was very subtle, almost unnoticeable, with an excellent basil pesto.  Since we all tried both dishes, technically we shared these, too. 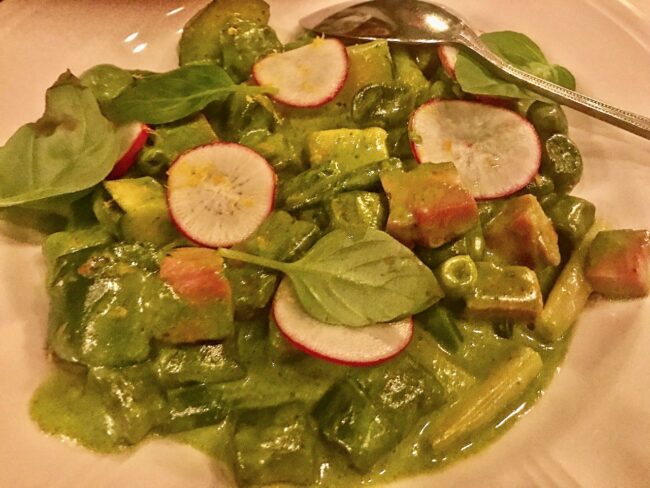 Emperor Kim ordered the Caesar salad (remind me not to dine with him on the Ides of March) with crispy pancetta (C$18) and the Pasta e fagioli. 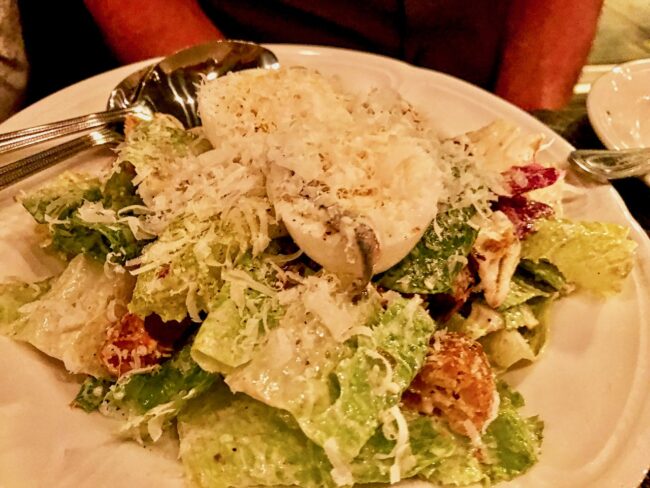 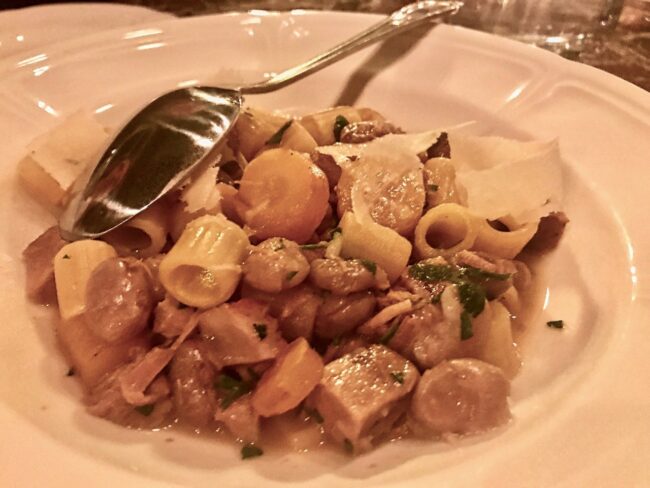 Tracy and I shared the Porchetta with green beans and tomato, meatballs (C$15) and bruschetta with mushrooms and mascarpone. 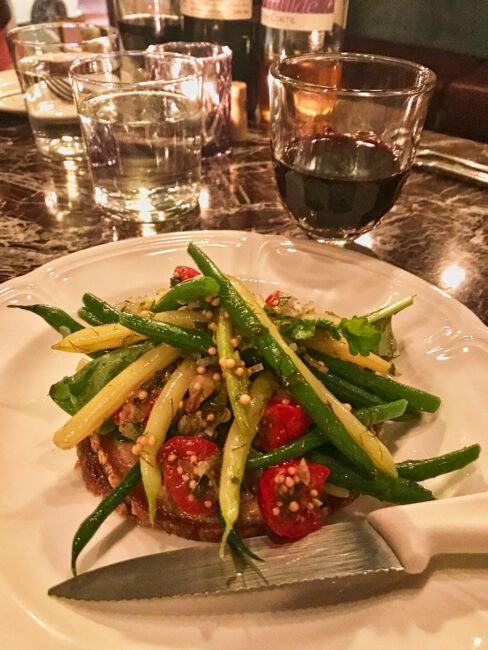 We left no food uneaten, but we were undeterred from forging ahead with dessert.  Our server was gushing over the special puff pastry with mascarpone and fresh peaches so we ordered one to share along with the Torta Caprese, which was a dark chocolate cake with an Amarena cherry and chocolate ice cream (C$10).  Needless to say, both were gone before you could say, “I’m stuffed.” 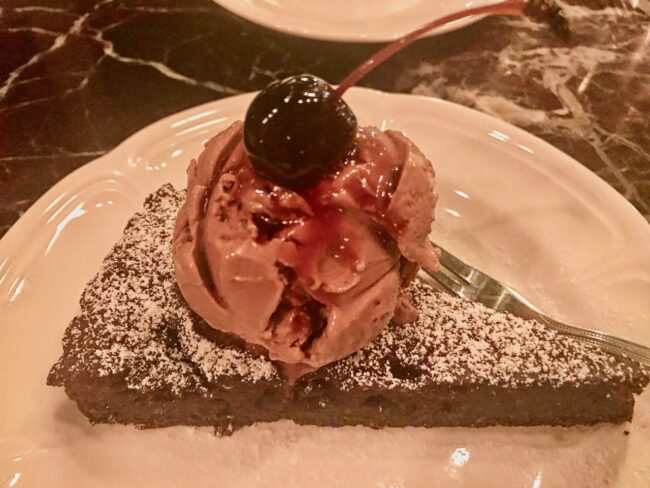 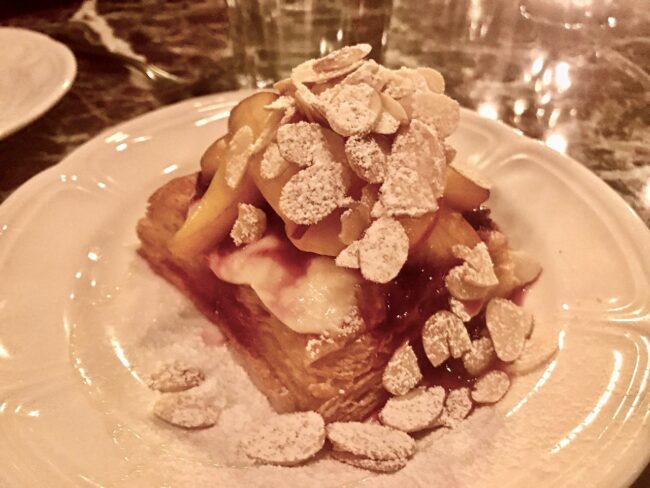 As with seemingly all the restaurants we visited on this trip, Un po di Più had a great playlist including, once again, the Mel Tormé song Comin’ Home Baby, only this time it was the original version by “The Velvet Fog” himself.

I strongly recommend Un po Di Più as one of your restaurant choices in Montréal. Ambiance, food quality and service combined for a captivating evening.

On the way home we were tempted by some other sweets, but fortunately our stomachs were screaming, “NO!” 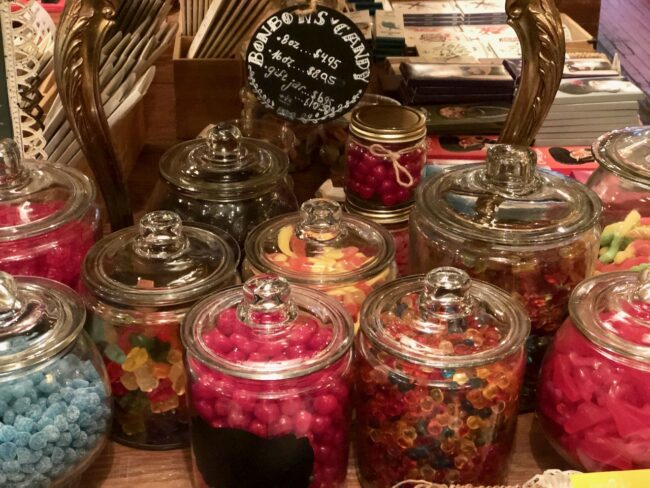 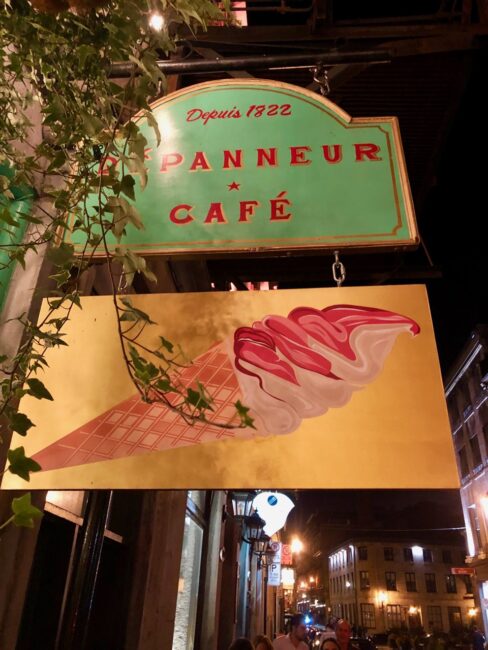 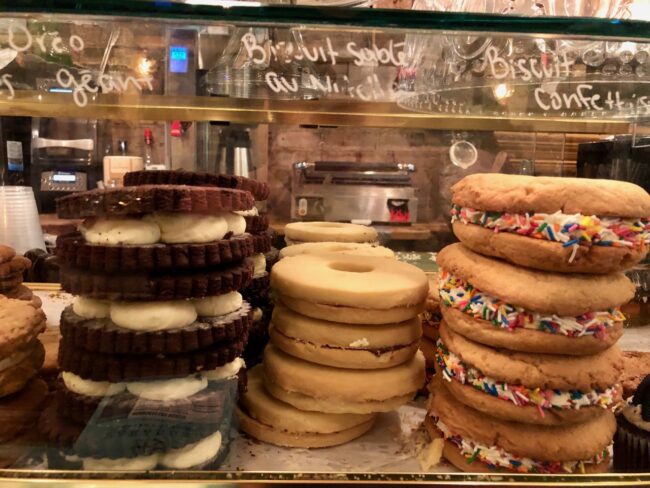 We walked down one of the streets and a familiar figure looked like he was heading for home … plate. 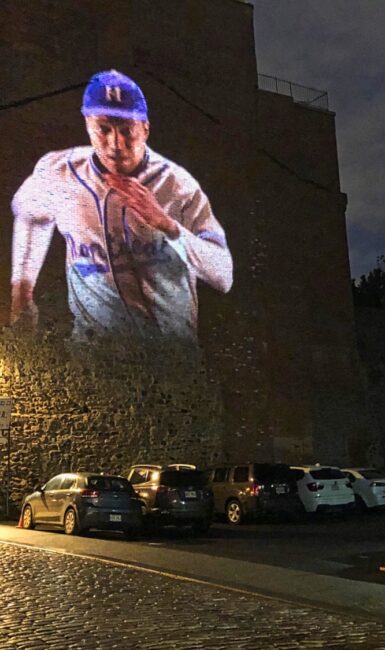 It was another of Montréal’s Cité Mémoire tableaus, this one featuring Jackie Robinson.

No, we weren’t in Brooklyn. Before becoming the first African-American player to play in the major leagues (Brooklyn Dodgers), Robinson played for the Montréal Royals, Brooklyn’s triple-A minor league affiliate. After an initial road trip with the Royals in the U.S. where he was taunted by racial slurs, Robinson and the Royals returned to Montréal. Robinson’s widow Rachel recalled, “When we got to Montreal it was like coming out of a nightmare. The atmosphere in Montreal was so positive, we felt it was a good omen for Jack to play well.”

It was a great end to a wonderful evening.

We’d spend the following day wandering outside for the better part of the morning and afternoon enjoying a glorious blue-sky day. Our New England Patriots fan/Uber driver took us up to a famous park, where we strolled around a lake, learned a little more about Montréal’s history, attempted to enter a nearby cemetery and finally climb 99 steps (at first) to a shrine dedicated to Canada’s patron saint. 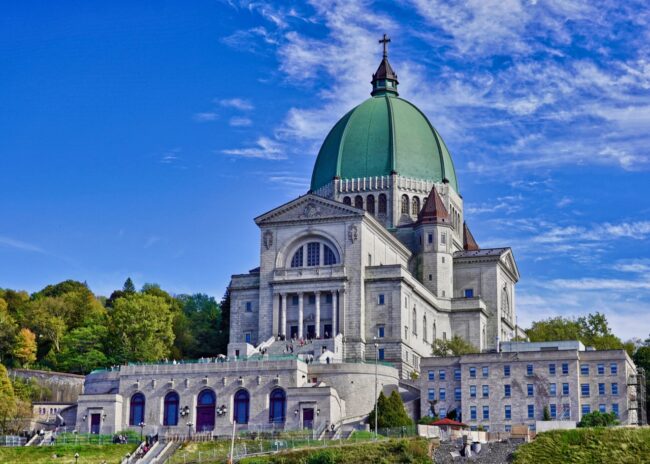 We’d also attempt to go to that archaeology museum we’d threatened to visit since we arrived.  I wonder if we’ll make it in time.

NEXT: CHAPTER FIVE: THE FOOLS ON THE HILL

Day Four – Park With A View, A Squirrelly Building, Central Park Designer, Boat Race, Where’s The Entrance?, A New Mrs. MaiTai?, Sing Us A Song You’re The Piano Man, Saint Be Praised, Up Up and Up, You’ve Gott Have Heart, Cab Driver Comedian, The Line That Never Moved, Wise Decision, No Drinks Without Food, Drinks With Food & Getting Ready For Old School