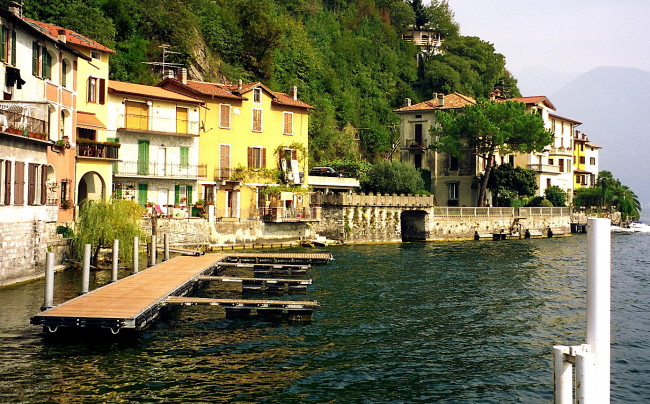 “Auf Wiedersehen,” “Au Revoir” and “Arrivederci” (so many languages, so little time) to Grindelwald and Switzerland.  Italia, here we come. 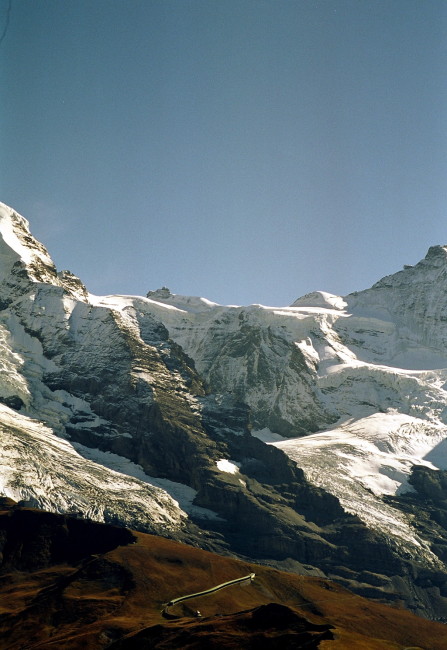 Within 45 minutes we were winding our way through the Alps on our drive to Lugano and our destination of San Mamete in Italy.  The frightened look of bus drivers and motorcyclists were many as our ugly blue car careened around corners at dizzying speeds.

Another via Michelin faux pas caused a slight delay as we headed into Lugano.  The map stated to take the “Lugano Centre” exit for Lugano to help us navigate to San Mamete and the Stella d’Italia Hotel.

First up was “Lugano Nord.”   Next up was Lugano “Sud.”   I’m no linguist, and I don’t play one on T.V., but it doesn’t take a rocket scientist to figure out that centre lies between sud and nord.   We got off at Lugano Sud and headed back toward the center.  It was a very lovely drive along the lake, although the sky was pretty hazy.  Not knowing where the hell we were, I decided not to “pull a Saarbrücken.”  I screeched into a parking lot and asked a taxi driver how to get to San Mamete.  Tracy would have asked, but the taxi driver was so good looking she just stared like that crazy guy at the waterfall. 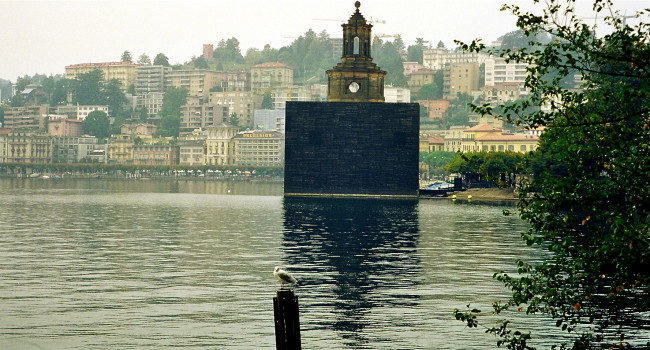 The cab driver told us to get on the little road toward St. Moritz and “you’ll be in Italy very shortly.”  I knew that St. Moritz was in Switzerland, but the road cut a swath through a little niche of Italy, and, sure enough, 15 minutes later we were at our hotel, the Stella d’Italia, situated in a perfect position on Lake Lugano.  The views from the hotel and its boat dock were captivating and would have been even better had the haze lifted. 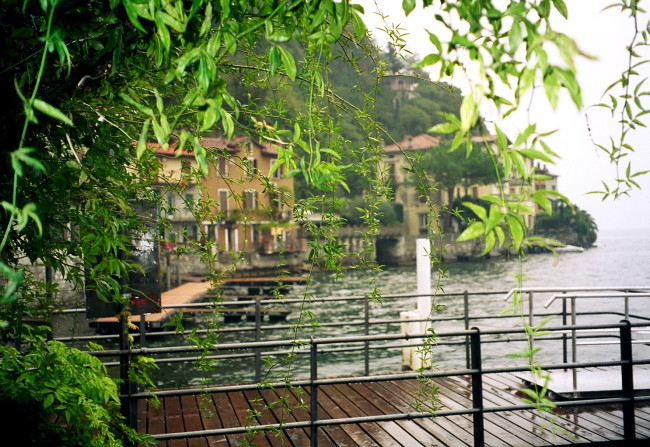 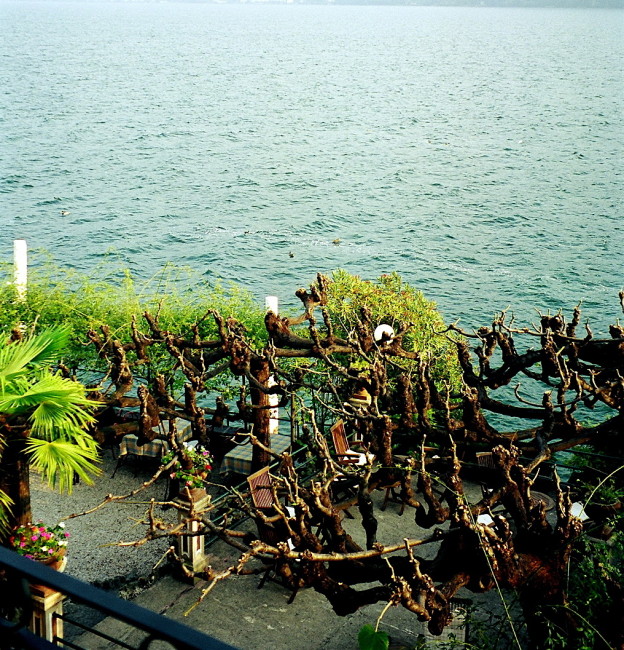 We were starving because, after all, we hadn’t eaten in about four hours.  We sat in the outdoor courtyard with a fabulous view of the lake.  It was sunny and hot, and we soon found out that this hotel offered one great dish after another.  I had my favorite Italian appetizer, prosciutto y meloné and pasta in a venison sauce.  “Oh, deer,” I said.  Tracy dined on ripe tomatoes and cheese along with another incredible pasta dish. 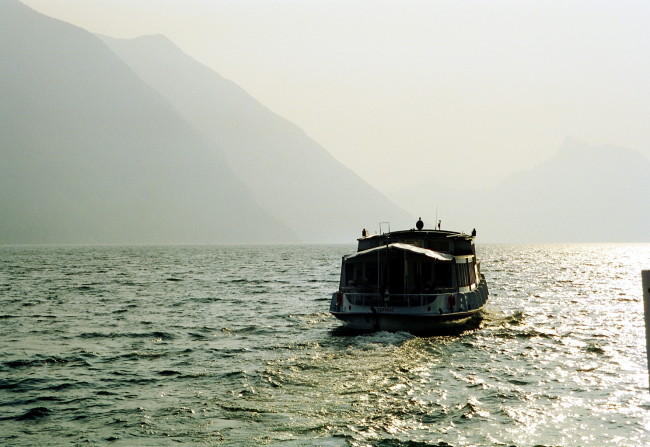 There is a boat dock at the hotel where the Lugano boat stops twice daily and, taking advantage of another blue-sky opportunity, we took a ride to Porlezza, a town that was having a street fair.  We tooled  (as opposed to meandered) around the town, stepped inside a beautiful, little church and got back on the boat an hour later for the trip back to San Mamete.

About 15 bicyclists joined us on the trip, and we started chatting. 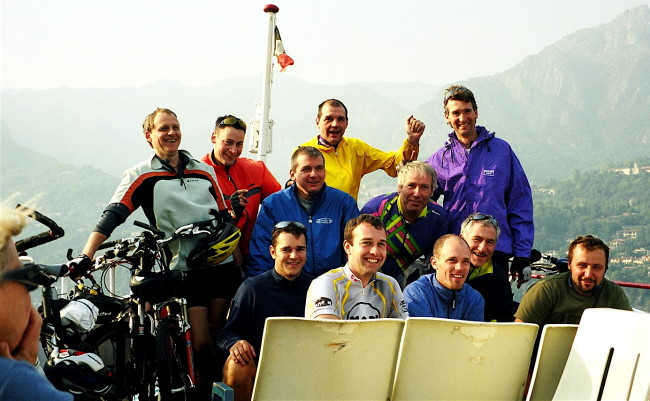 They were from a Swiss club and enjoyed hearing about California. 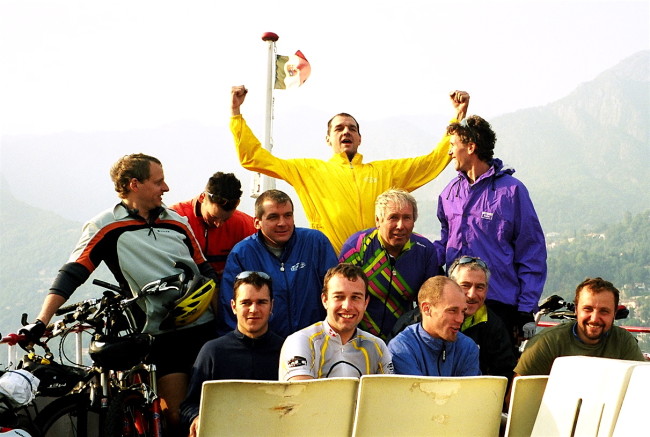 They wondered if Ahnold was going to win.  It was amazing to us how big the “Arnold for Governor” story played in all of Europe. 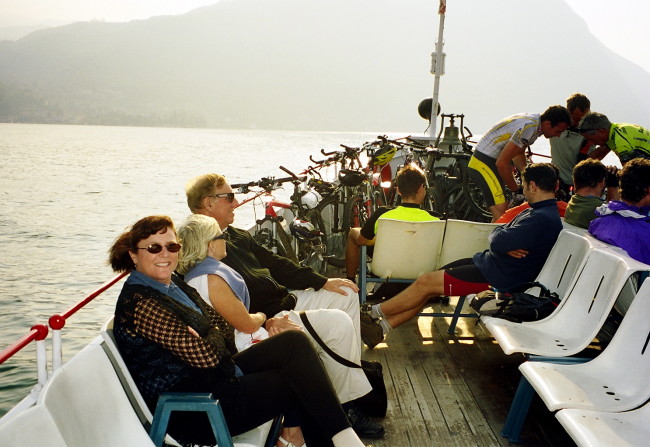 But alas, we had to say “hasta la vista, baby” to the bikers when we reached our hotel., plus we didn’t know how to fix their broken bicycle. 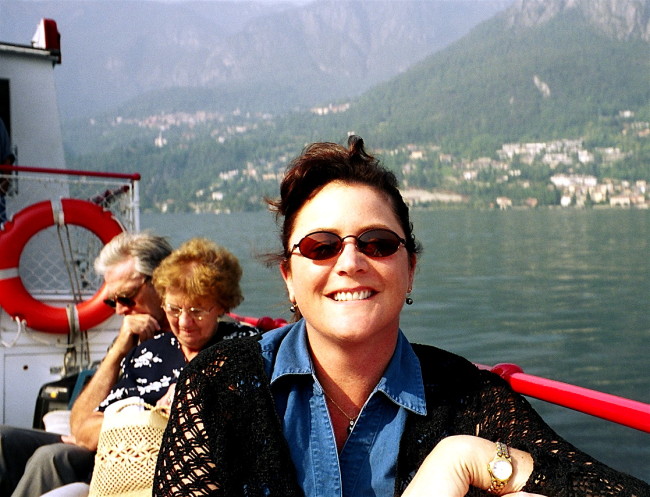 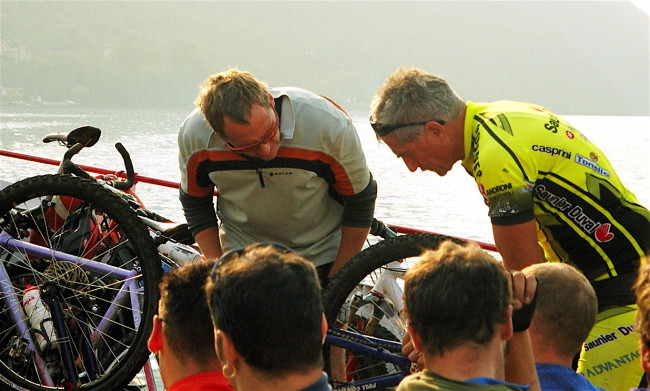 Stella d’Italia has the same menu for dinner as they do for lunch, only it’s a couple of euros more (but still very reasonable).  I again had the prosciutto y meloné along with a very tender filet de bouef and the best créme brulee I’ve tasted in quite some time (well, at least since Ribeauville).  Tracy went the shrimp salad and veal saltimbocca route.  Her dessert was mind-boggling it was so good; an orange hollowed out and filled with an orange gelato.  Fantastic.  Since we were in Italy, we forced down a couple of Limoncellos apiece.  God, how I love Limoncello.

Day Eleven – No Wrath Like The Scorn Of Five Ex-Wives, Stone Houses, This Could Be A Problem, Closed On Sunday, Nap Time And One Last Great Meal

We woke up to overcast and drizzle.  Since it was Sunday, we knew Lugano was shut down (for the most part), so we had plans to visit the Villa Favorita and its gardens.  I promised Tracy we’d see some gardens on the trip.  I always promise her gardens, but something always arises to preclude us from seeing them.   This time was no different.  The hotel desk person informed us that the Villa Favorita had been closed because the owner died and his five ex-wives were fighting over ownership.  No wrath like the scorn of five ex-wives.  The hotel people told us about a nice little drive near Locarno called Val Verzasca. 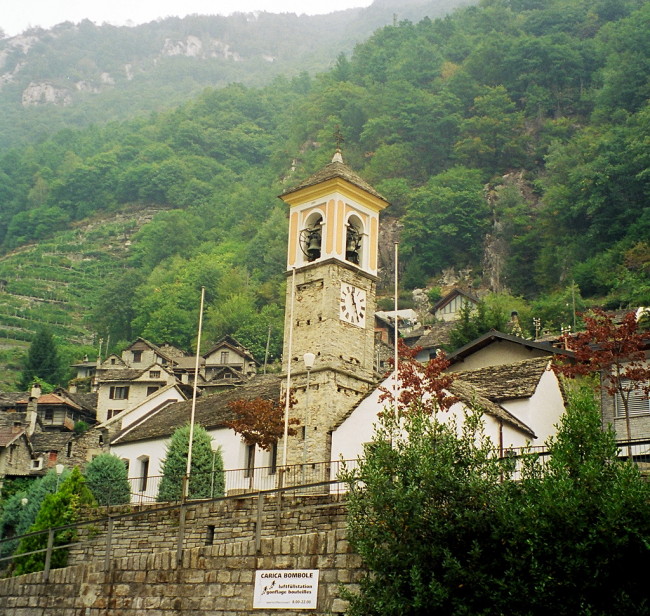 Only about a half hour drive from Lugano is the Val Verzasca.  A number of towns are nestled into the hills, and many of the houses are made out of stone.  We were told to see the town of Corippo, so we crossed a bridge and took the narrow road up to Corippo. “Hmm,” Tracy said.  “Why is everyone else walking?”  It was a good question, albeit I didn’t know just how good a question it was for about five more minutes.  About half way up the road, I realized why people had decided to walk.   If a car was coming down from Corippo, there is no chance we could both fit. 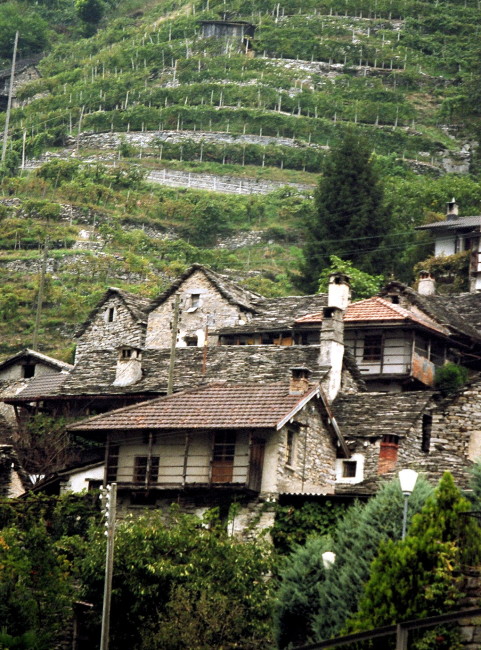 Suddenly, I started sweating like Robert Hays flying the plane at the end of the movie Airplane.  I really did not want to back down this skinny road.    Fortunately, we did not encounter another car (probably because no other driver was stupid enough to navigate that tiny road). 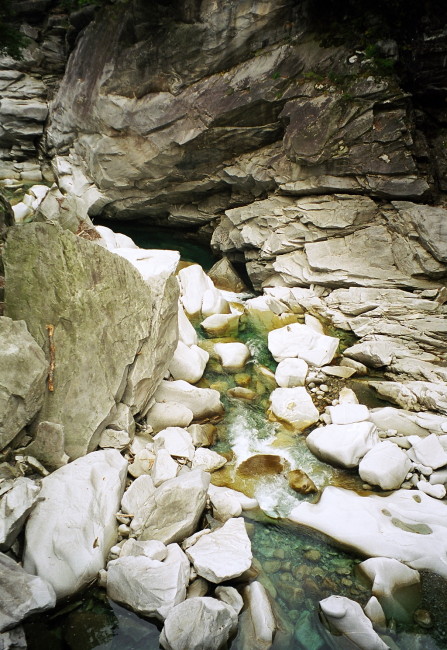 The town was cool ( a little river runs through it), but since it was raining in the hills by now, we drove back to Lugano to check out a little of that area.   Lugano was so quiet that only the sound of ducks could be heard.  We decided this town is not all is quacked up to be. 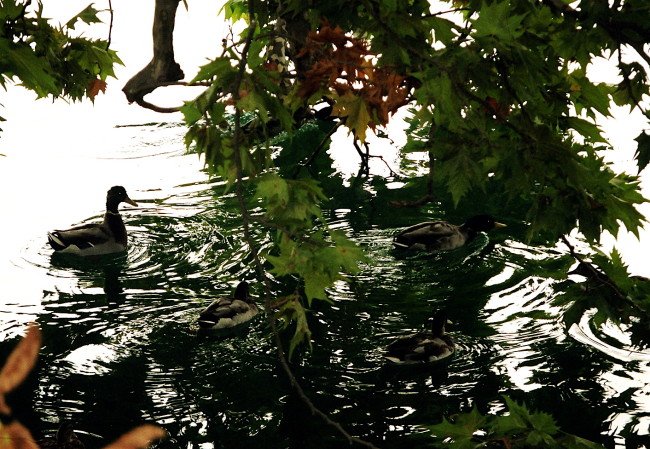 We walked around the old town and promenade, but since everything was pretty much closed, there was only one thing left to do…eat!   It was not raining at our hotel, so it was another alfresco lunch experience.  The spaghetti was terrific, and I was forced again to try their crème brulee.  Damned if it wasn’t just as good at lunch as it was at dinner. 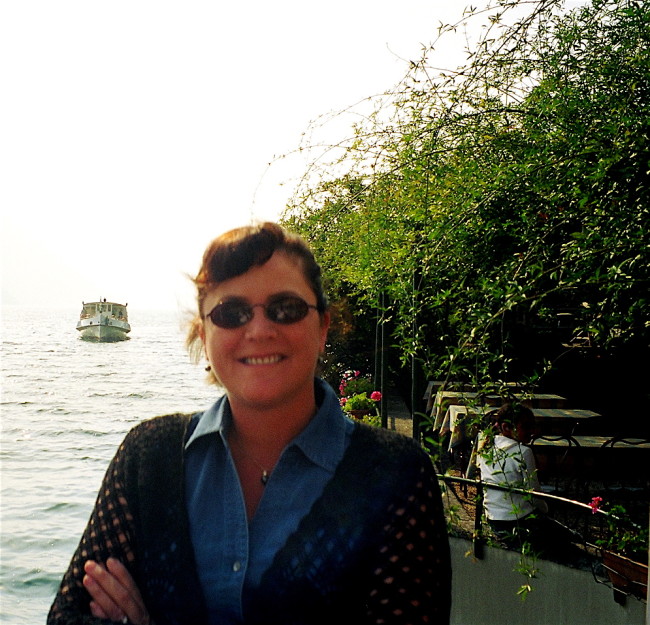 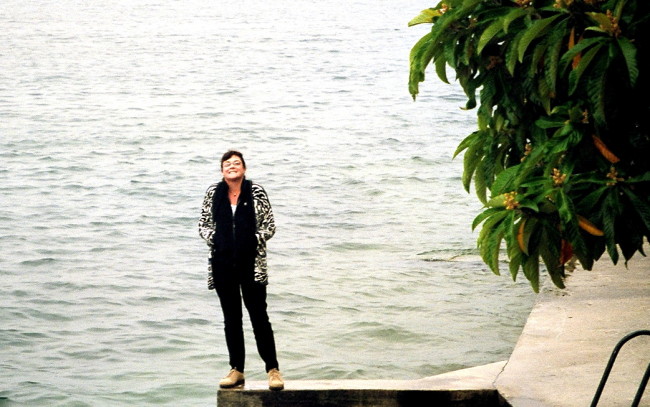 We strolled through San Mamete, which has some pretty skinny streets. 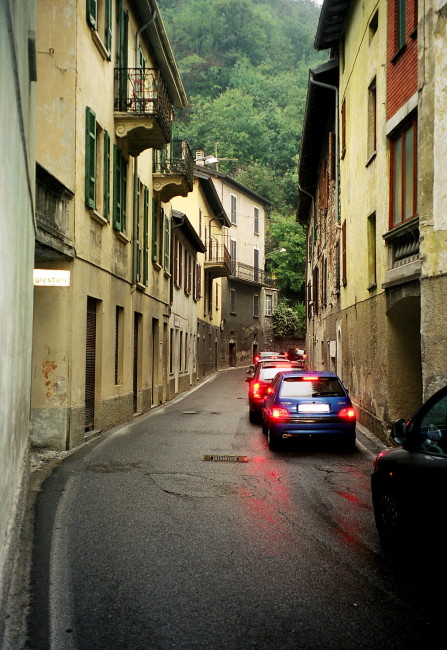 Tracy and I enjoyed our patio view of the lake that afternoon sipping a little more wine and enjoying the day. 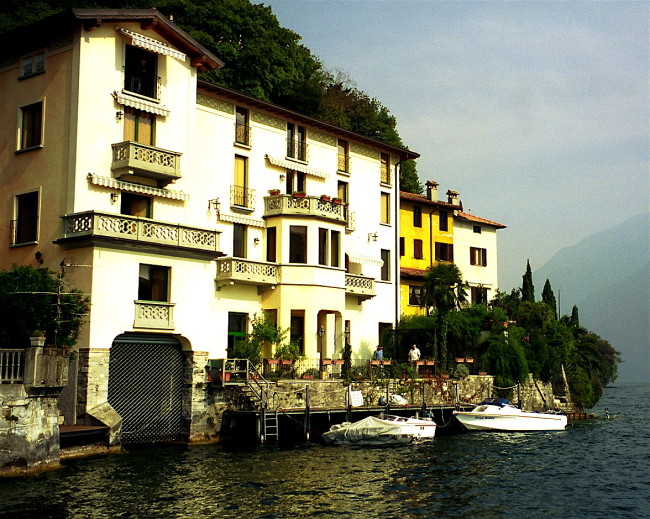 The occasional rain shower made the afternoon refreshing. We then actually took a nap. So this is what relaxing is like! 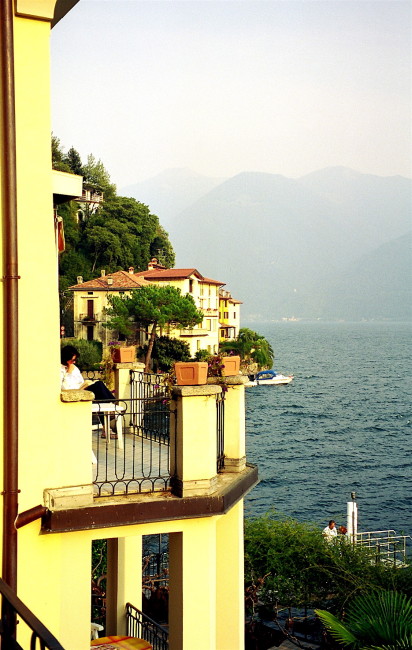 Dinner was again fantastic.  Crème brulee was again delicious. Limoncello was again delicious (twice).  Whether I would ever travel to the Lugano area again is iffy, but if you visit here, I highly recommend the Stella d’Italia in San Mamete as a place to stay (140€ per night for the room with the patio overlooking the lake). 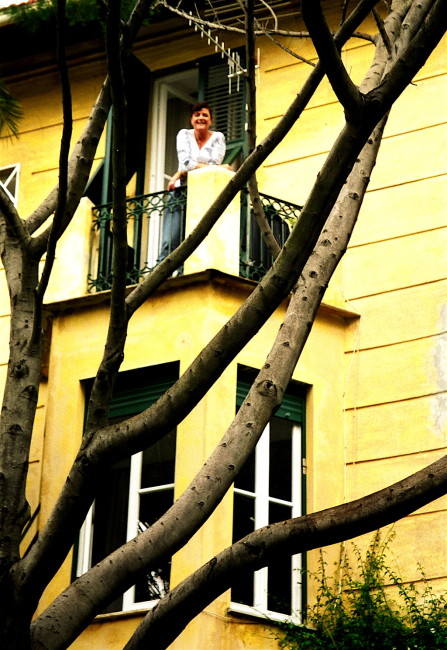 Next: Day Twelve – Colle Flowers, If Those Gardens Are Beautiful My Nose Will Grow Longer, A Miracoli We Found It, Bird Droppings, Dinner In A Medieval Town And For Whom The Bells Toll