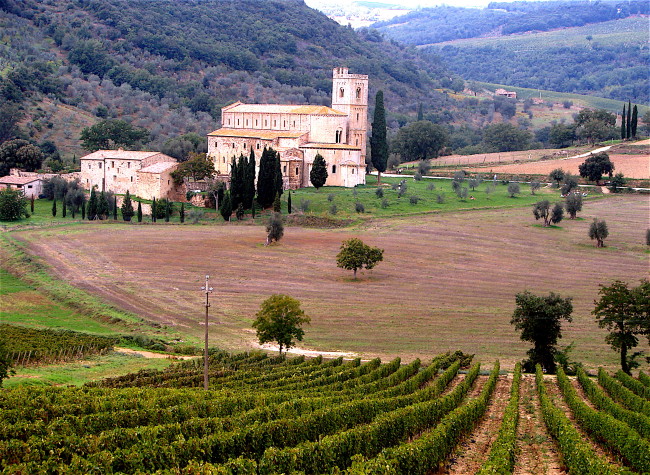 Following yesterday’s big driving day, I promised my tour group we would have an easier day (mutiny is an ugly thing).  We had another nice sleep in our great room. 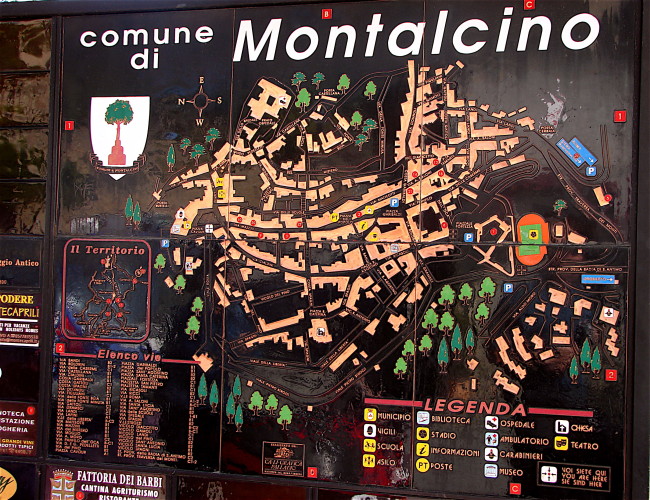 After breakfast, we took the short drive to Montalcino, home of Brunello; Italy’s “Big Red” vino, but not without putting my passengers in peril…again!

It had been hours since I had made a driving error, so I thought I’d regale the passengers with another one. Trying to find the correct street to find the Enoteca la Fortezza di Montalcino, I somehow instead found a dirt road with a very steep downgrade. Mary had a look of terror on her face, but, once again, we survived unscathed. Luckily, I was able to find a spot to turnaround before the car plummeted off the cliff.

After parking, we walked through town, which was having a market day. We all had varying opinions of market days. Kim and Mary thought they were kind of neat, while Tracy and I thought it was more like a bad flea market. 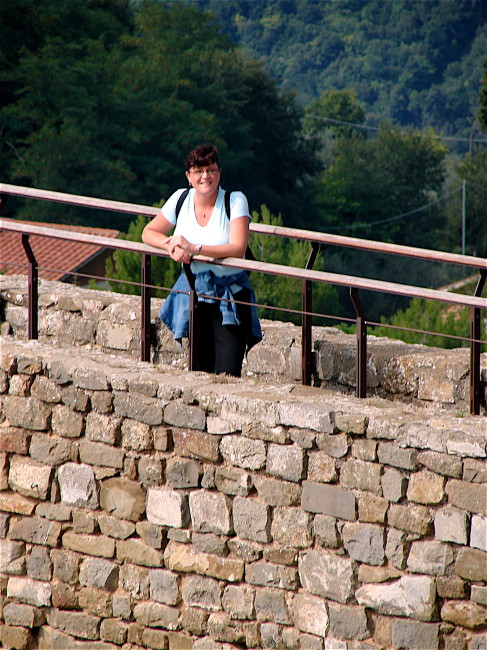 But we had vino on our mind (hey, it was almost 11).  First though, we bought our tickets 4€ apiece) to go up to the top of the Fortezza, which was built in the 1300s. I had read that in the 16th century, the was the Fortezza di Montalcino was last refuge of 600 Sienese, who fled here when their city was under siege by the Emperor Charles V. These 600 people then established a government in exile. 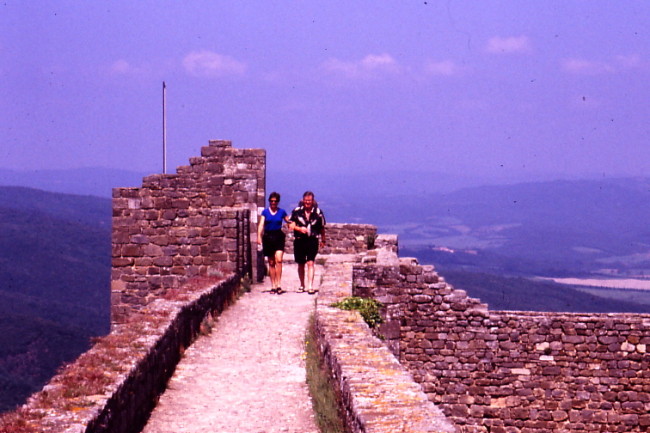 The last time we visited here was in 2001, when Kim and Mary looked much younger… 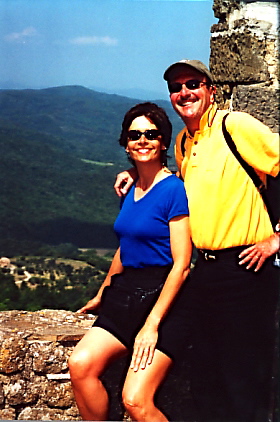 …I guess I looked a little younger, too. 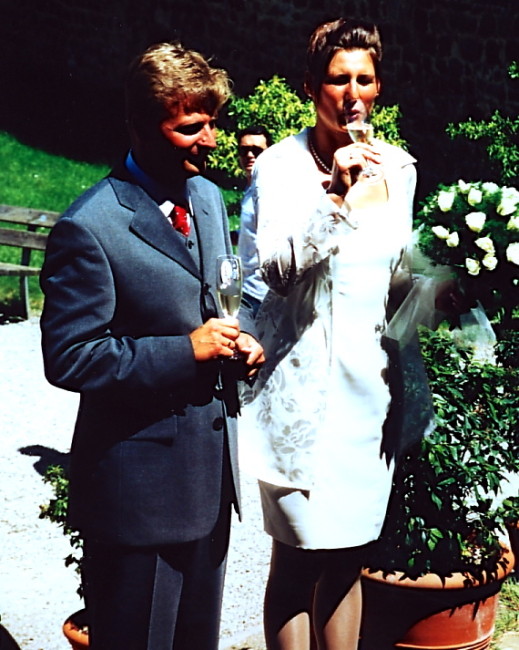 On that trip, we also wandered into the middle of a wedding. 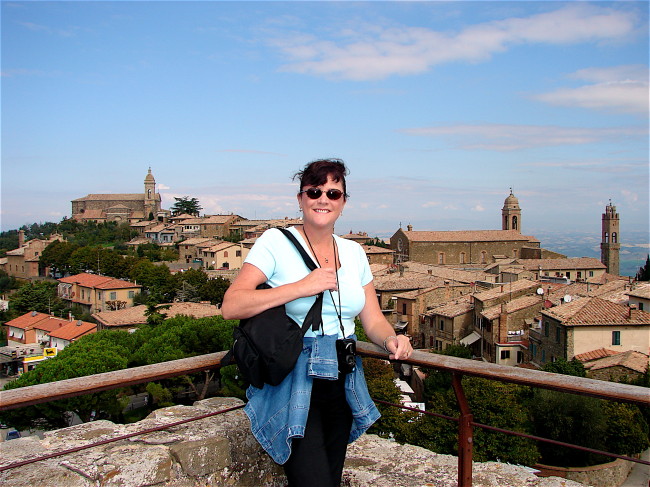 Today, only Tracy and I climbed to the top and walked around the ramparts, taking a bunch of pictures. The Fortezza was just as fun the second time around. Then it was time to spend our life savings on Brunello. Kim and I each did a 9€ tasting of Brunellos, and I bought one for about 60 bucks. The Fortezza is a must stop if you are interested in Brunello (and nice views). 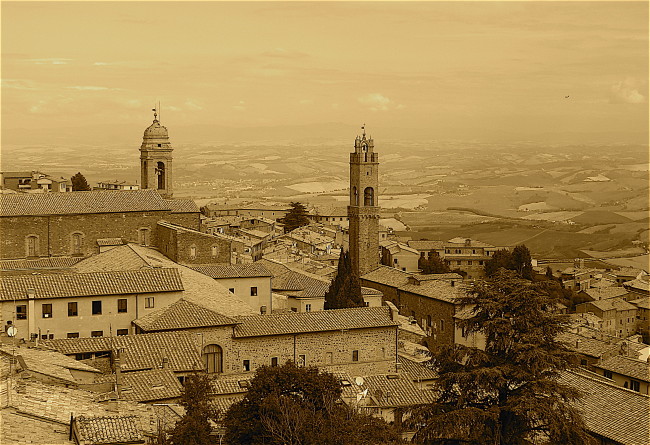 We then purchased some provisions at the local market and headed to Abbey Sant ‘Antimo, located a few kilometers away.

Driving down the Abbey lane to the parking lot, the view was lovely. 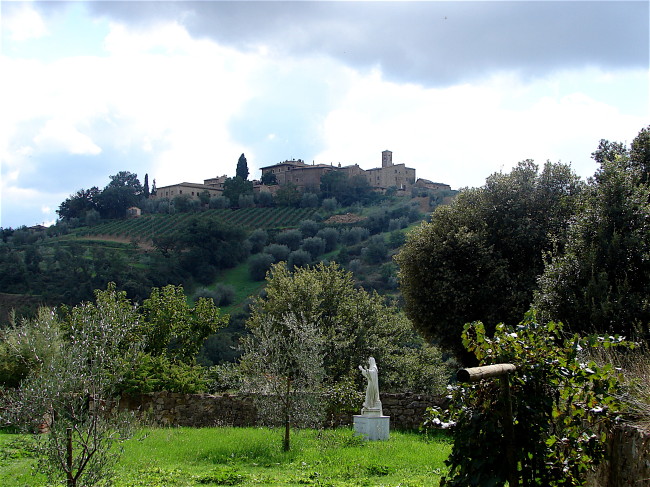 Legend has it that the abbey was founded by Charlemagne in the late 8th century after he fell ill nearby (too much Brunello?), and he prayed for deliverance. 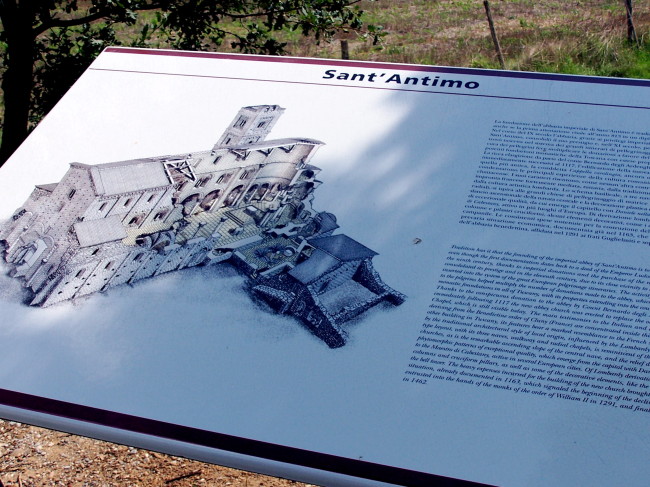 The present church dates from the 12th century. 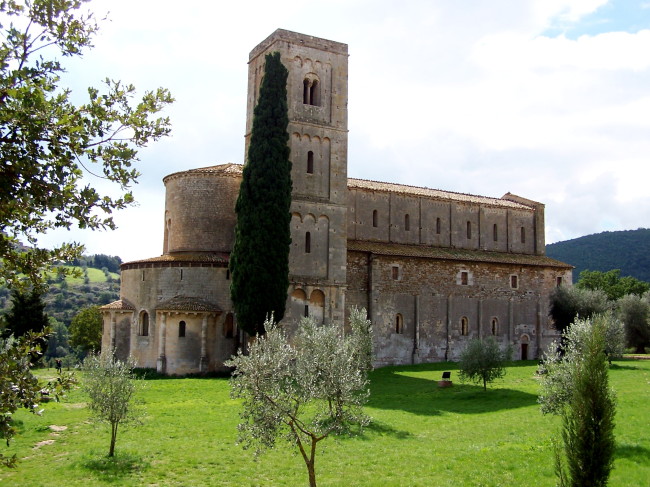 We had hoped to have a picnic while listening to Gregorian chants, but unfortunately our Brunello tasting put us at the abbey only minutes after the monks had finished their chanting. 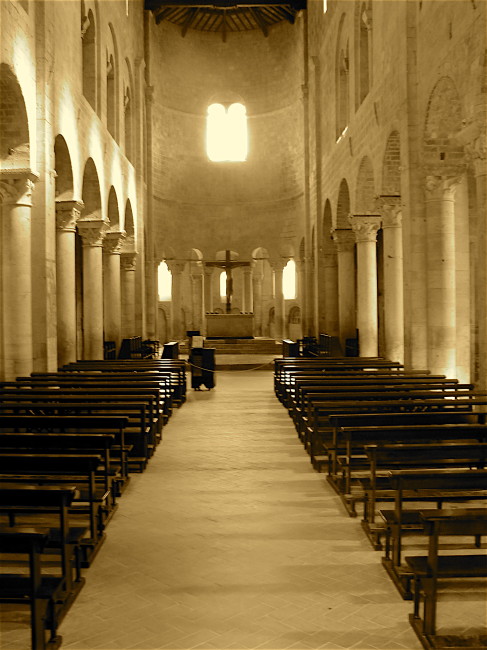 It would be two hours until they would chant again, so we paid a visit to the abbey, which, after seeing so many opulent churches, was quite beautiful in a simpler sort of way. 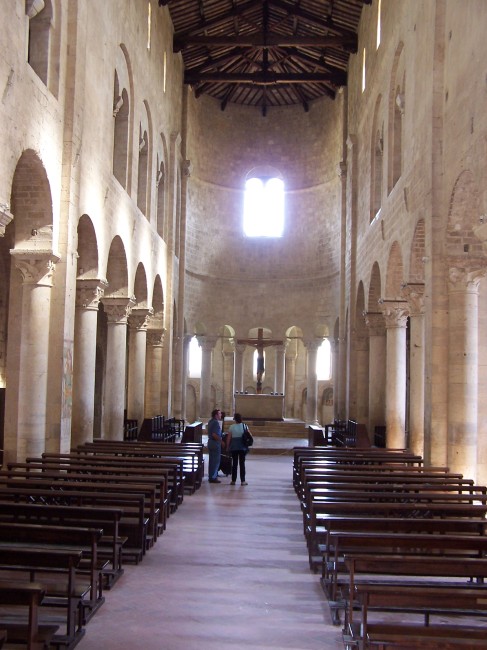 In the early afternoon, we went back to San Quirico and stopped in the Collegiata San Quirico. If I have my saints correct, St. Quirico was a third century martyr killed at the age of five by the Romans because he declared himself a Christian. 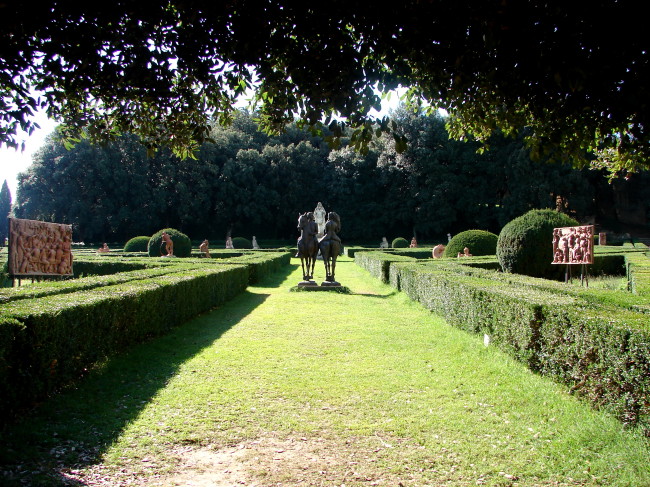 We also took a look at the Horti Leonini, which is a 16th century garden comprised mostly of box hedges. 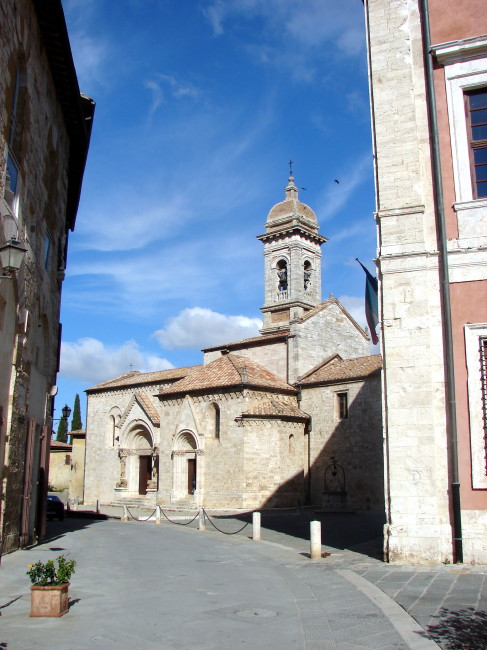 As usual, I was having trouble finding beautiful gardens for Tracy, although the street we were walking on had some gorgeous flowers.  I think that counts. 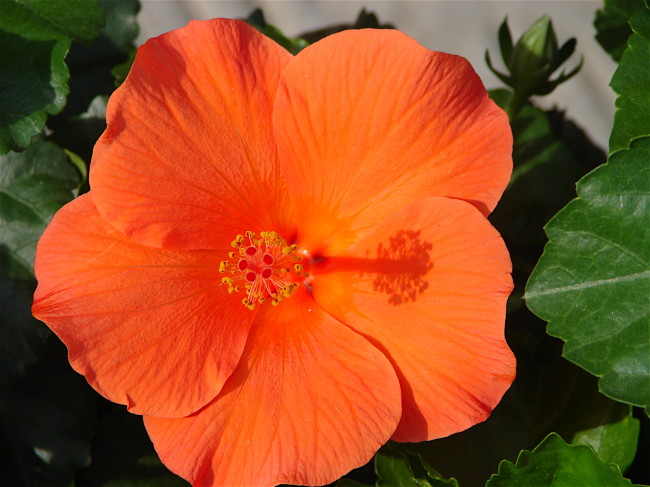 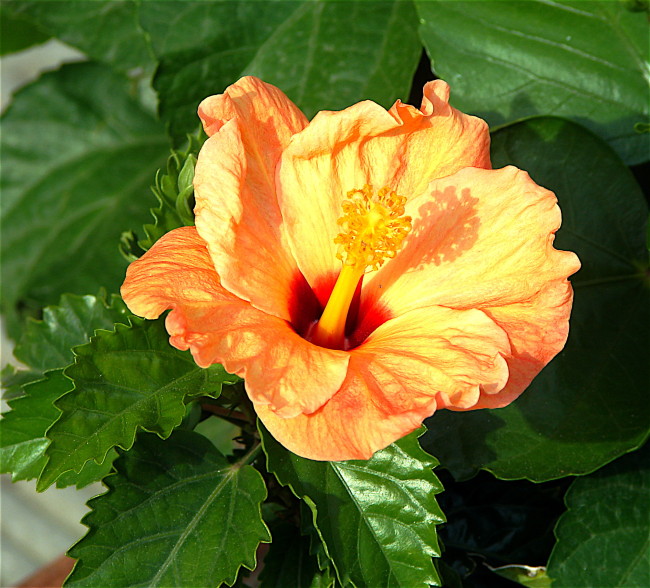 Both Kim and I went to an Internet café to look and see if we had any important work messages. 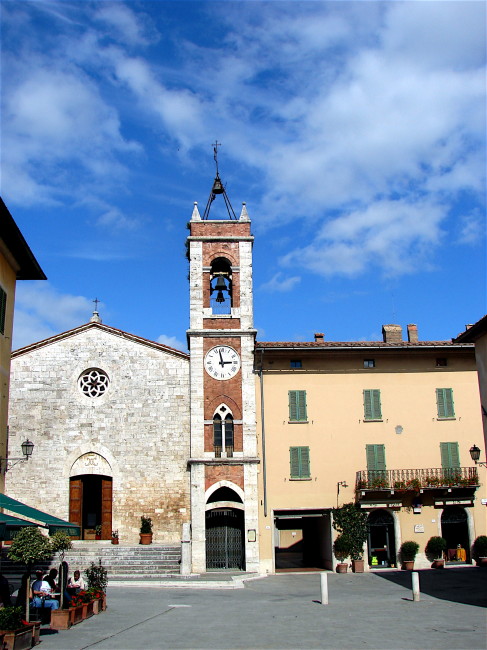 Tracy just wanted to know if anyone had visited our cats at Cat Hotel in Burbank. The cats were doing fine, only our Tabby, Cupid, was pouting because I didn’t spend the extra dollars to put him in a suite with the television that showed 24 hours of Animal Planet. 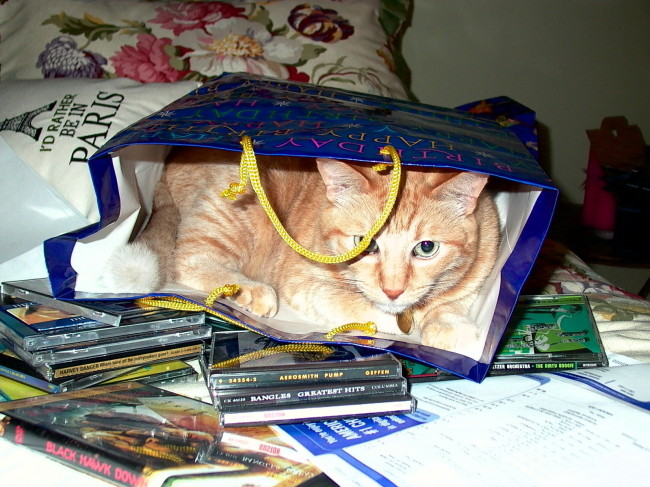 After wading through more than 500 e-mails, mostly telling me where I could buy cheap Viagra and Xanax, and seeing that our San Diego Padres were still amazingly in first place, we stopped in to see some local produce at the market. 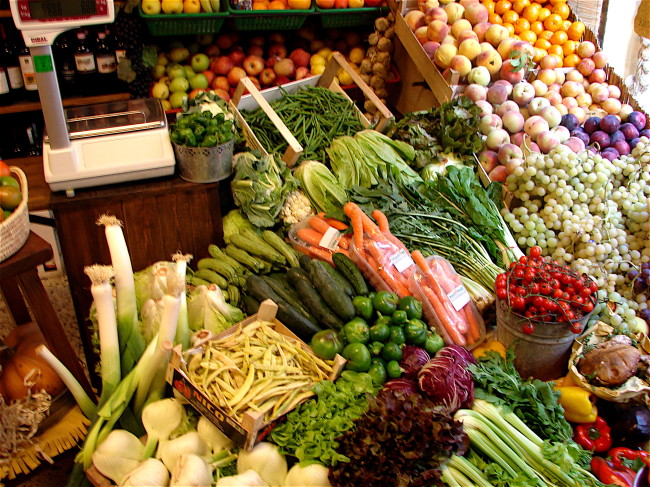 Then it was back to the hotel to take more grape shots. 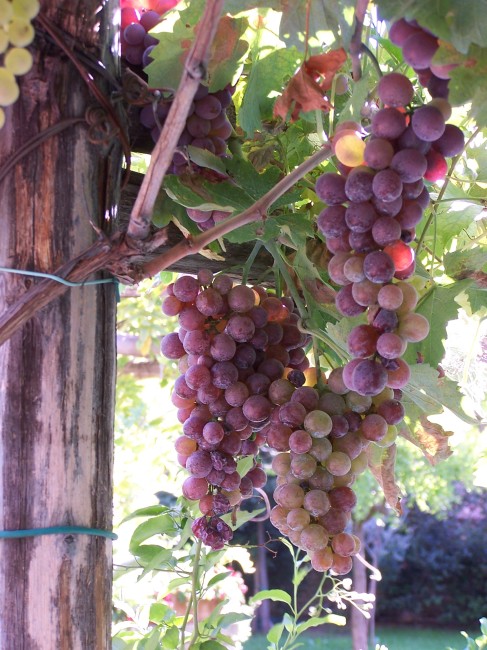 About the Palazzo del Capitano: This hotel was superb. The people who worked the front desk were extremely friendly and helpful in giving us directions or anything else we needed. Both rooms were spectacular (our room was 150€ a night; Kim and Mary’s 130€ a night).  The garden in the back is a peaceful oasis for those that need a little R&R on their trip through Italy.

Like Spello, San Quirico d”Orcia is a very central base to see much of what Tuscany has to offer.  It is much less touristy and crowded than a Pienza, Montalcino or Montepulciano (which we visited in 2001).  The corner restaurant/bar on the “main” drag was filled one night with locals watching a soccer match and playing cards.  It’s also flatter than most hill tons, which can make navigating easier for those who might have some walking issues. 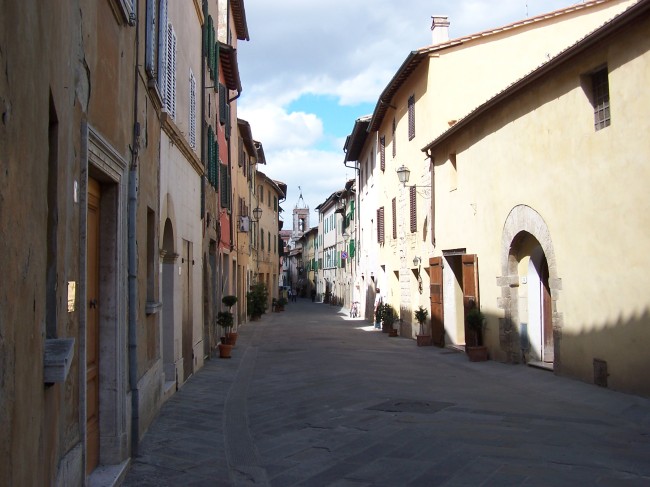 About the Palazzo del Capitano: This hotel was superb. The people who worked the front desk were extremely friendly and helpful in giving us directions or anything else we needed. Both rooms were spectacular (our room was 150€ a night; Kim and Mary’s 130€ a night). The garden in the back is a peaceful oasis for those that need a little R&R on their trip through Italy.  As stated earlier, I can’t recommend this hotel enough. This was my 12th visit to Europe, and for value, cleanliness, beauty and service, it was the best hotel experience we have had on any of our trips. 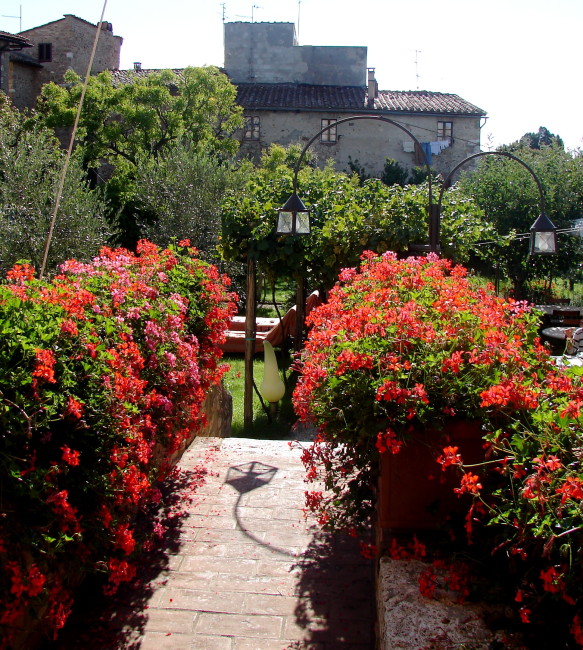 That evening, the four of us sat with another couple from the Bay Area in the garden drinking Prosecco and wine, and munching on some of our provisions.

OK, let’s get back to food and drinking. Even after wine and cheese, we were hungry (there is something weird about Italy in that no matter how much you eat, you just have to eat more; there must be something in the Prosecco). 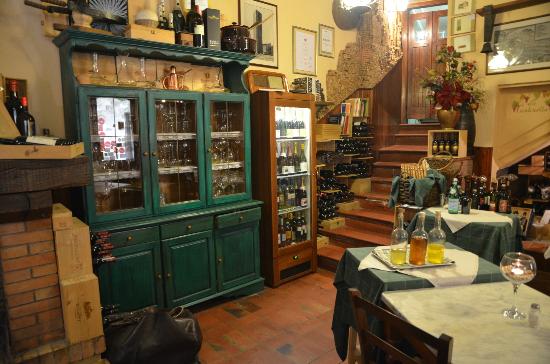 We dined again at the hotel restaurant, the aforementioned Trattoria Al Vecchio Forno (photo courtesy of TripAdvisor).  I had the big appetite on this night, devouring a meal of prosciutto y meloné, ravioli with Pecorino sauce, baked Pecorino with arugula and, for good measure, topping it off with some Biscotti dipped in Vin Santo.

Back at the hotel, we had after-dinner drinks in the breakfast room area of the hotel, which also has a cozy bar. We toasted the hotel with various libations including Limoncello, Campari (wonder who ordered that) and some Amaretto.

We would be saying arrivederci to relaxing San Quirico tomorrow morning by driving through the Crete area to Siena, where we were scheduled to stay four nights.  As you will find out soon enough, our four-night stay became a two-night stay for various reasons.  Stay tuned.

Next: Day Ten – That’s The Ticket, An Oasis In The Forest, The Fabulous Library, I Love A Parade, A Case Of Road Rage (Italian Style) And A Picturesque Setting For Vino