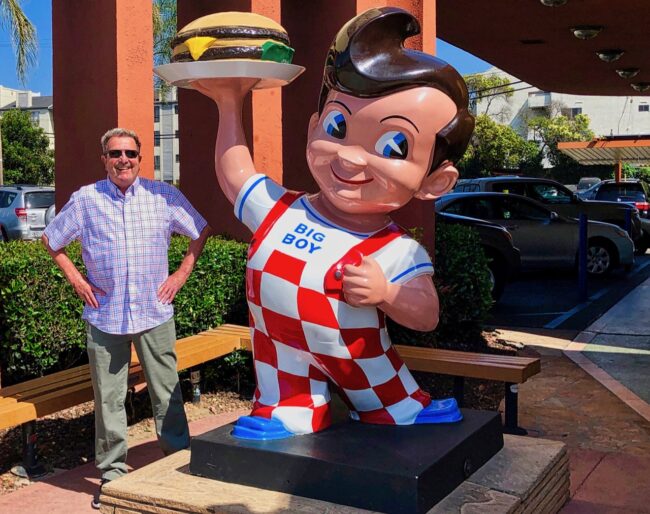 When I was growing up, the favorite words I heard from my dad on a Sunday afternoon were, “Let’s go to Bob’s Big Boy.” From the scrumptious double-decker burgers to the carhops to my Big Boy comics, there was no restaurant I wanted to go to more than Bob’s. 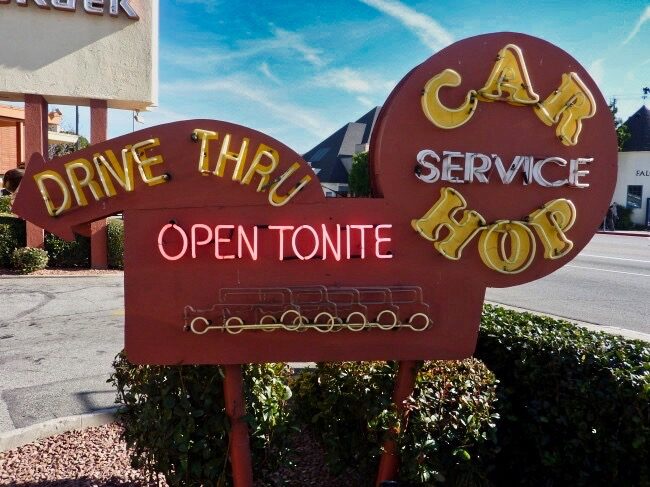 Sadly, the Pasadena Bob’s exists no more, but fortunately there is still one in nearby Burbank, California. This year it celebrates its 70th anniversary.  Recently, I returned to revisit an important piece of my childhood.  Oh, who am I kidding … I was craving a delicious hamburger. 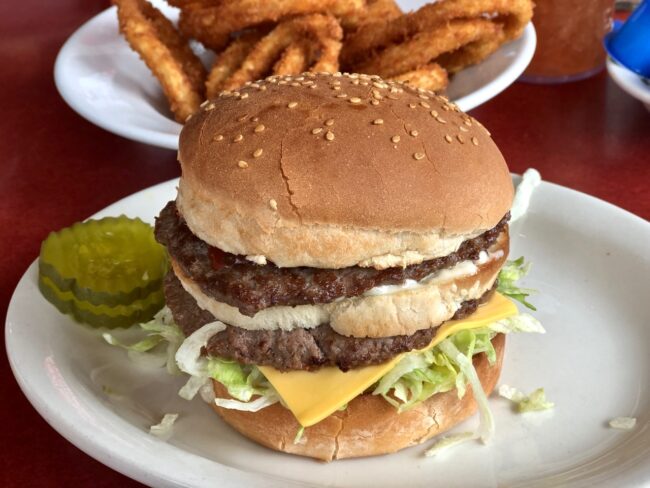 Tracy and I joined friends Rob and Donna for hamburgers, fries, onion rings and even a dinner salad for breakfast (best to get those calories out of the way early in the day!).   Oh, and don’t forget the Hot Fudge Cake for the table.  More on that later.

Out front stands the iconic statue of Big Boy holding that delicious burger in one hand.  As I would find out shortly, Bob’s still delivers my favorite hamburger on earth. The 70-foot tall neon sign makes it a hard place to miss. 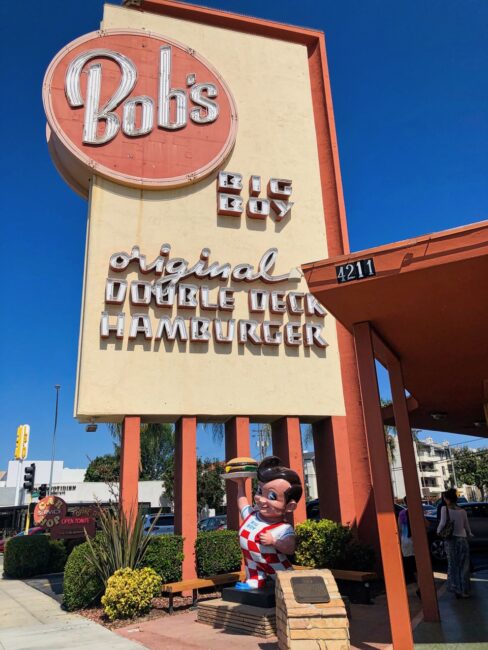 Located at 4211 Riverside Drive in Burbank, this Bob’s Big Boy was built in 1949 making it the oldest remaining Bob’s Big Boy in the United States.  The restaurant was designated a California Point of Historical Interest in 1993 by the state of California. It was designed by famed Los Angeles architect Wayne McAllister, and built in 1949 by local residents Scott MacDonald and Ward Albert. McAllister also designed the original Lawry’s restaurant on La Cienega, Burbank’s famed Smoke House and also the original Sands and Desert Inn hotels in Las Vegas. 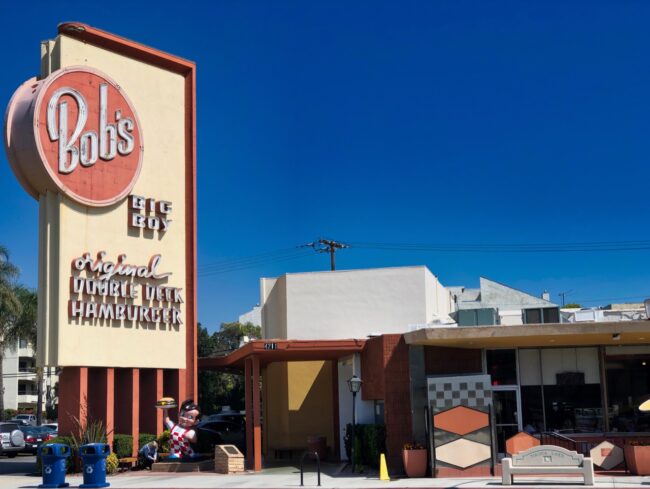 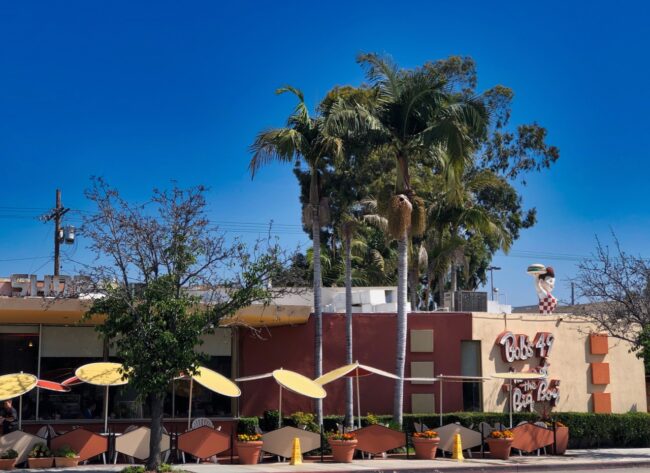 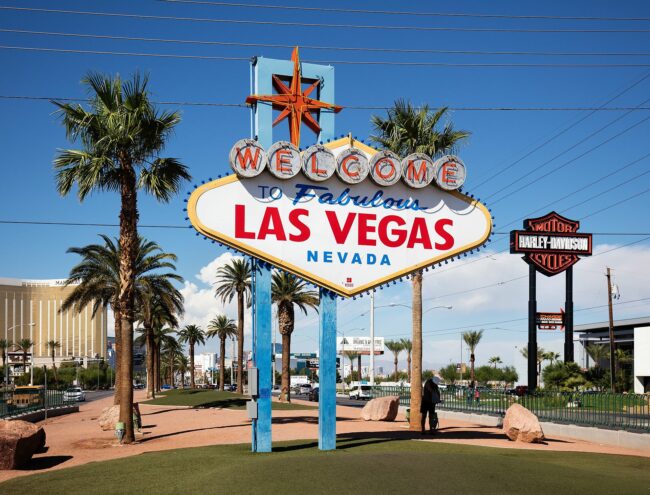 Bob’s history dates back to 1936. After selling his DeSoto roadster for a reported 350 bucks, Bob Wian started a 10-stool hamburger stand in Glendale. It was initially called Bob’s Pantry.  In 1937, at the request of one of his customers (a member of Chuck Foster’s Big Band) who wanted “something different for a change,” the Bob’s Big Boy Double-Decker hamburger was born.

According to Bob’s website, “Customers couldn’t get enough of Bob’s new creation. One fan, in particular, was a chubby six-year-old boy in droopy overalls. He would often help Bob sweep up in exchange for a free burger.” According to the website, “One day Bob forgot his name and called out ‘Hey, Big Boy.’ Something clicked, and a name was born: Bob’s Big Boy.”  Another regular customer, a movie studio animator Ben Washam, who was an animator for Looney Tunes, sketched the now famous character on a napkin. (photo from Bob’s website)

One year later in 1938, Bob’s Big Boy became the official name, and that 10-stool hamburger stand had been transformed into a drive-in restaurant. By the 1950s, there were Bob’s Big Boy franchises dotting the landscape all around Southern California (only five remain). At one time there were franchises in numerous states, as well.

During my formative years, Bob’s was THE place to go late on a Sunday afternoon with my parents, sitting in the car as carhops served our food. “Big Boy … light on the relish …. fries and a thin strawberry shake, please!”  Why “thin?”  Bob’s marketed their milkshake as “so thick you can eat them with a spoon,” but I liked them more when I could drink them.  For awhile, I was addicted to Bob’s strawberry shakes. All my friends went for the thick shakes … and loved them.  I would have had one on my recent visit, but I am only allotted 25,000 calories per day.

Going to Bob’s Big Boy as a kid was always cool, and, oh how I loved those Big Boy hamburgers!  You couldn’t leave without picking up a Bob’s comic book featuring stories about their mascot (photo below from internet shows what the comic book looked like). 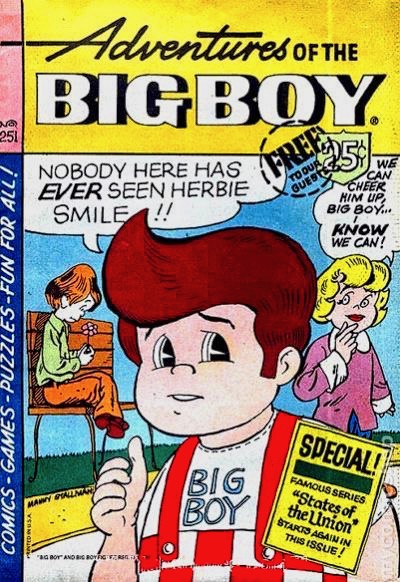 At their Burbank location, there are no longer comic books, but you can purchase some Big Boy paraphernalia …

… including some vintage Big Boy t-shirts, hats and mugs. They also have cartoon placemats for kids to color. 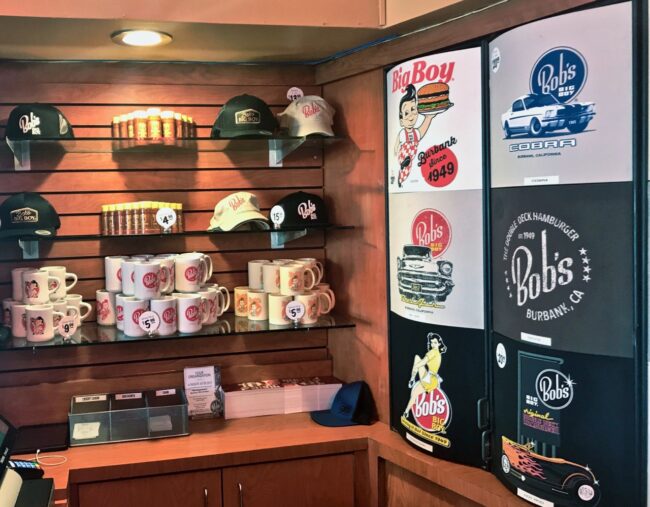 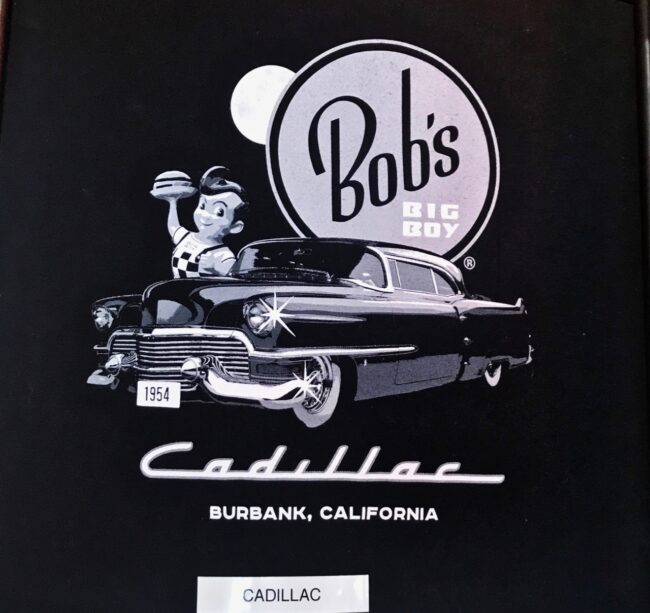 Some of the more famous customers at this Riverside Drive location included Bob Hope, Mickey Rooney, Debbie Reynolds, and numerous others, including four lads from Liverpool. 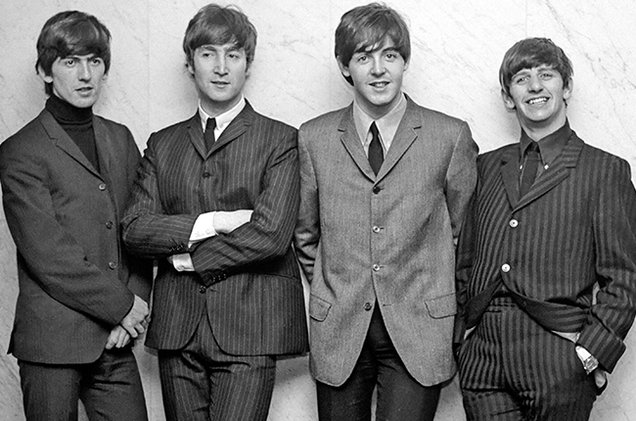 During their 1965 Summer Tour, reportedly The Beatles were looking for a ”real American diner” when visiting Los Angeles. They stopped here, and there is a booth with a plaque that commemorates that moment. (“The table is the last booth on the right, where the end of the windows facing Riverside Drive stop. A plaque at the booth describes the event. The plaque has been stolen many times by fans .. and has been replaced each time.”) 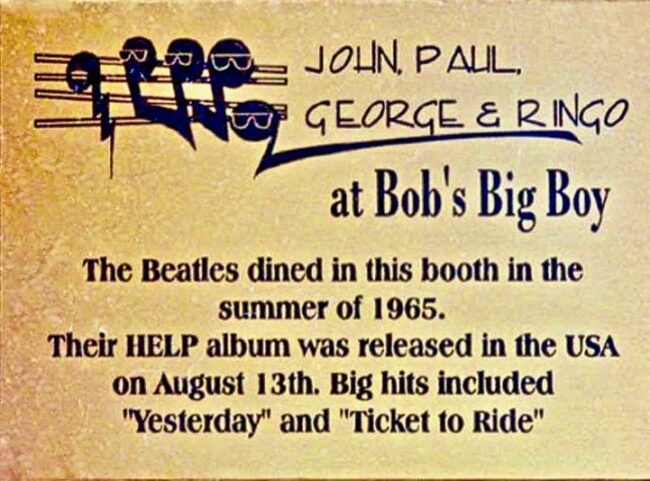 Many people request the booth, and since we arrived early for breakfast (yes, hamburgers for breakfast, baby), the booth was available, and that’s where we sat. I assumed that’s why Tracy said, “I want to hold you hand.” After we finished our hamburgers I exclaimed, “I could eat here eight days a week, but it might be hard to carry that weight.” 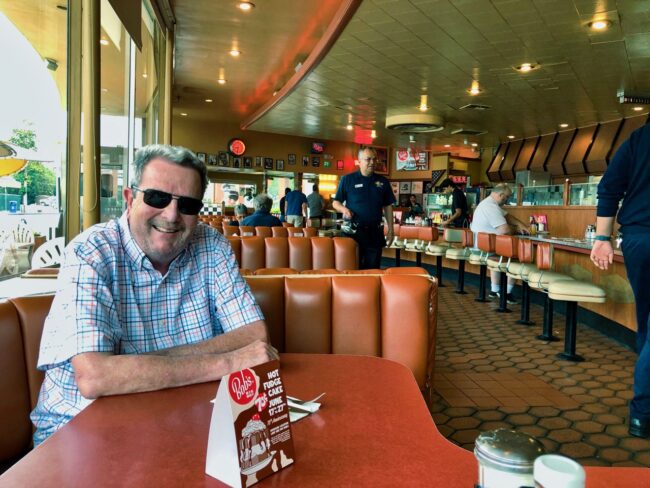 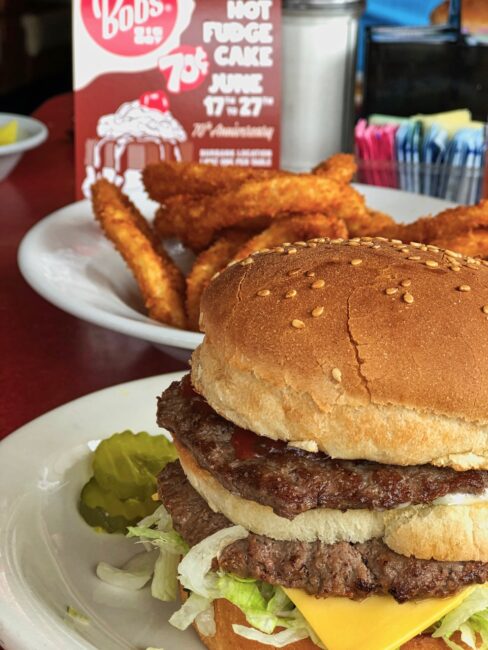 Tracy ordered an order of onion rings and said they were among the best she has tasted.  Rob helped her finish the large plate of delectable rings. 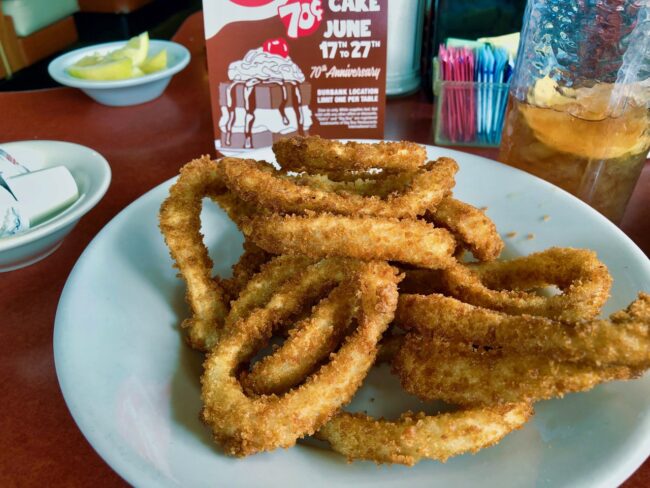 We also ordered a mountain of Hot Fudge Cake that Bob’s is offering for 70 cents (one per table) during a limited time to celebrate its anniversary.  By the way, one per table is plenty … and it’s plenty scrumptious. 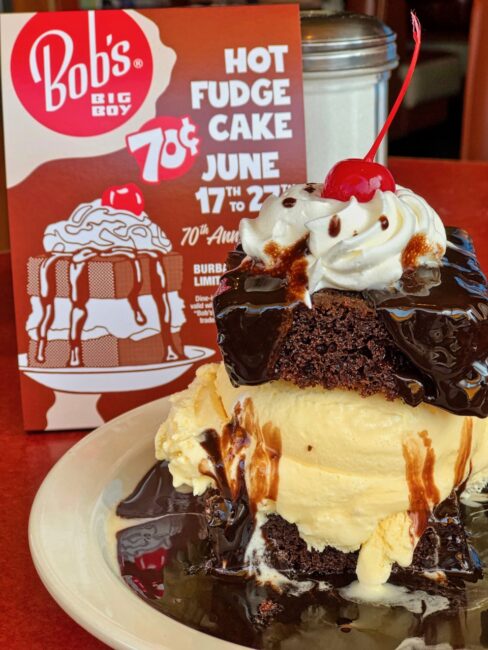 In high school, after I received my drivers license, Bob’s was my #1 spot to go to for lunch or dinner. And I wasn’t alone. From a 2003 L.A. Times article, “Bob’s was more than a mere restaurant. In the age of rock ‘n’ roll and hotrods, it was a teenage play land, the hottest place to be after a high school football game.” The carhops are gone, but on Friday nights from 4 – 10 p.m. you can still catch an array of cool automobiles at Bob’s Classic Car Show in Burbank. (photo from Roadside America) 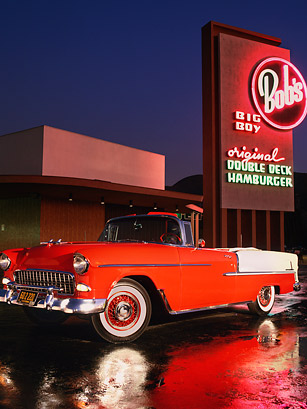 Some people even want to pose with Big Boy.  I mean, who would want to do that? 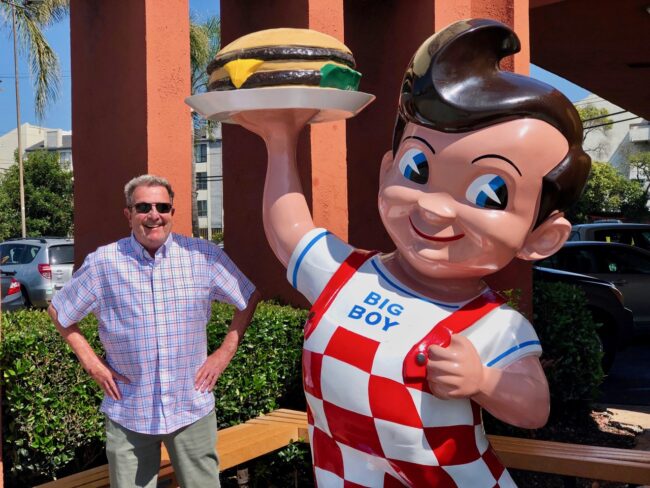 You can no longer get their famed double-decker burger, fries and a shake for 60 cents like you could in 1938, but you can still get a “Big Boy Combo” (double-deck burger, fries and a dinner salad) for $11.49.  Throw in that milkshake (thick or thin) for $5.49 and you have a heavenly meal.  Bob’s serves those famed burgers all day long, along with a host of other great dishes, including their famed “Pappy Parker’s Fried Chicken.” 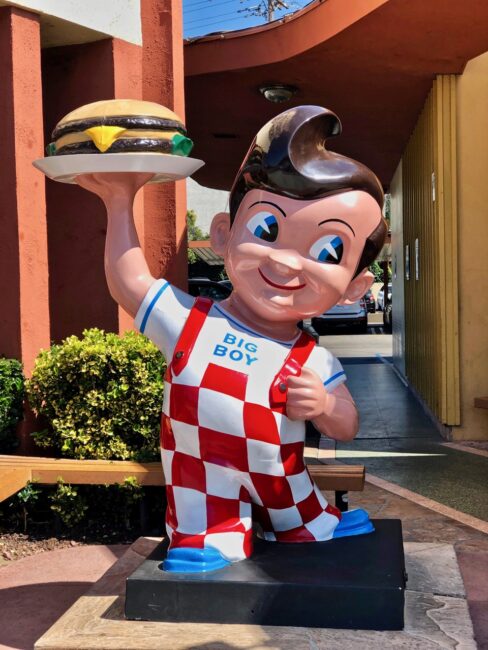 There might be better hamburgers out there (“might” being the key word), but the Bob’s Big Boy double-decker will always remain my nostalgic favorite for as long as I live.