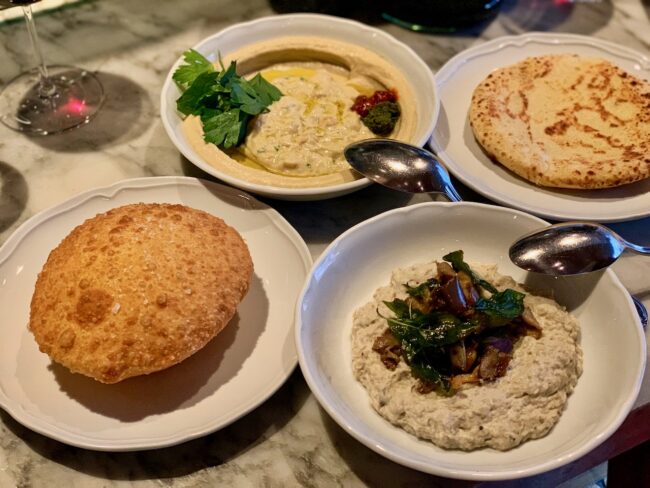 One great feature of living in Los Angeles these days is the influx of restaurants offering innovative cuisine from all parts of the world. Tracy and I had heard great reports from friends about Bavel, which features food highlighting dishes from the Middle East.  Bavel is another fairly new restaurant located in the trendy Arts District in Downtown Los Angeles.  If you haven’t been to the Arts District, it is chock full of new eateries (seemingly a new one pops up every day) and lots of young people who were out walking their dogs and sailing along on fleets of e-scooters (which, thankfully, are parked neatly rather than scattered along the sidewalk). 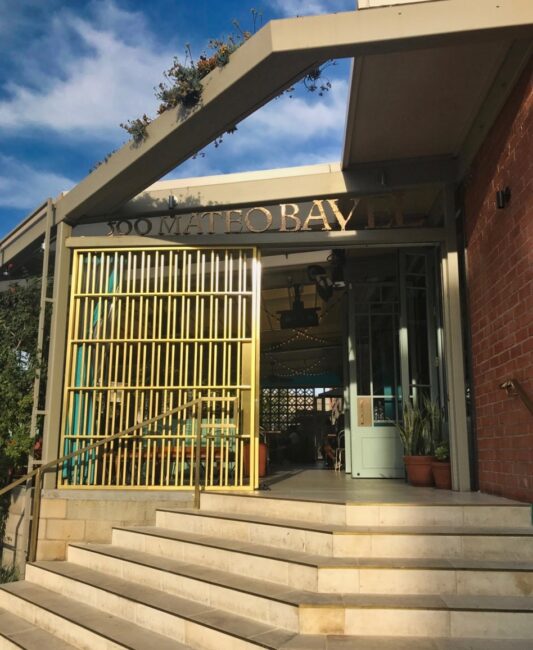 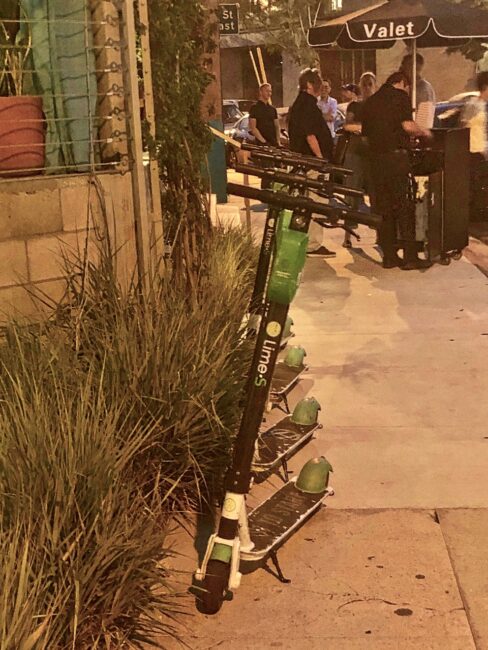 Bavel is from the husband/wife team who created Bestia, a hugely popular dining establishment we visited last year.  While we felt Bestia was a little overrated, the food and service at Bavel was, for the most part, exceptional.  Just as with Bestia, it takes a while (sometimes a few weeks) to get a reservation at this restaurant … and they are a must.  We booked a 5:45 p.m. time slot on a Sunday evening and by 6 p.m. there was a line out the door.

Joined by our friends, Paul and Susan, we sipped cocktails on the outdoor patio while perusing the menu.  The patio has a retractable cover for when the weather is cooler and it was opened shortly after we were seated.  As is the case with most restaurants, conversation is much easier on the patio. 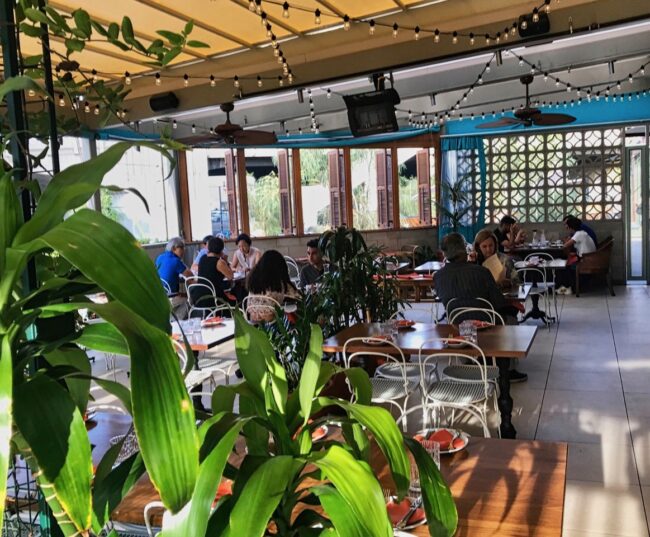 If you’d like a drink prior to your meal or if you have to wait, there’s a small area where you can sit. 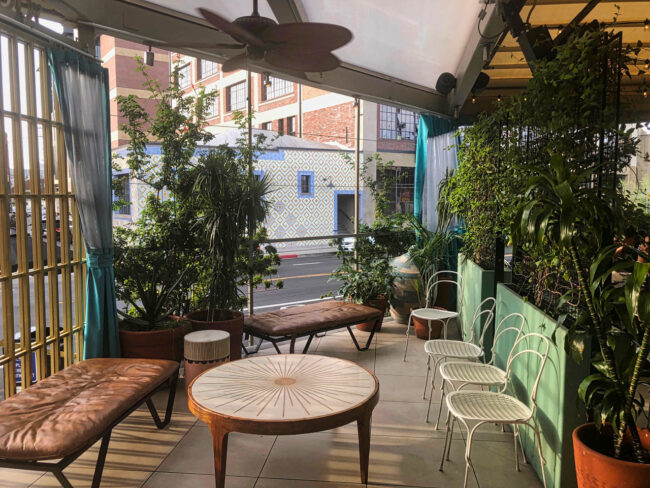 We did check out the interior of the restaurant which has rows of plants cascading from the ceiling, which, I think, besides looking lovely, may help with noise reduction. 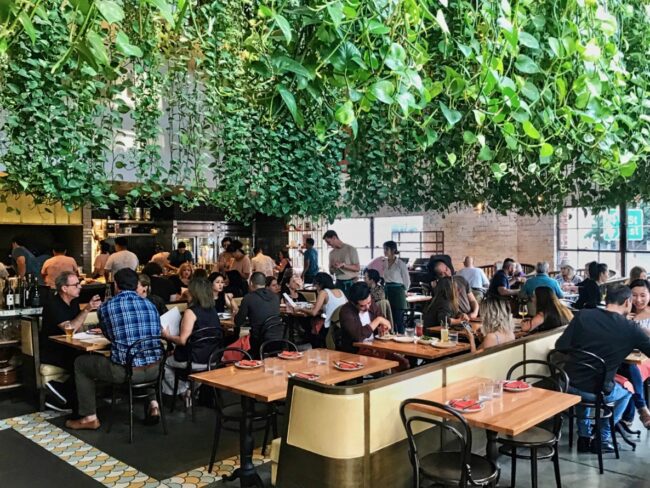 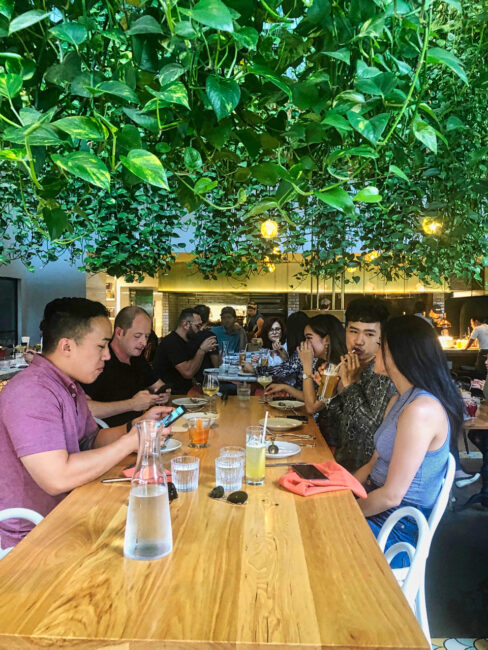 The open kitchen with raging fire adds to the ambiance. 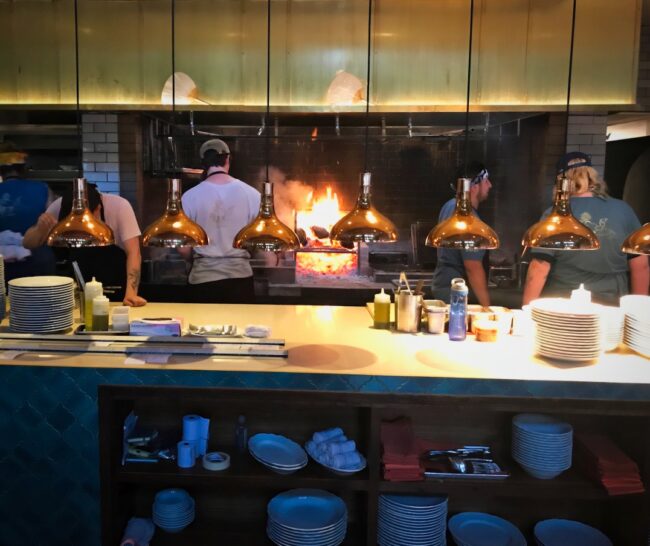 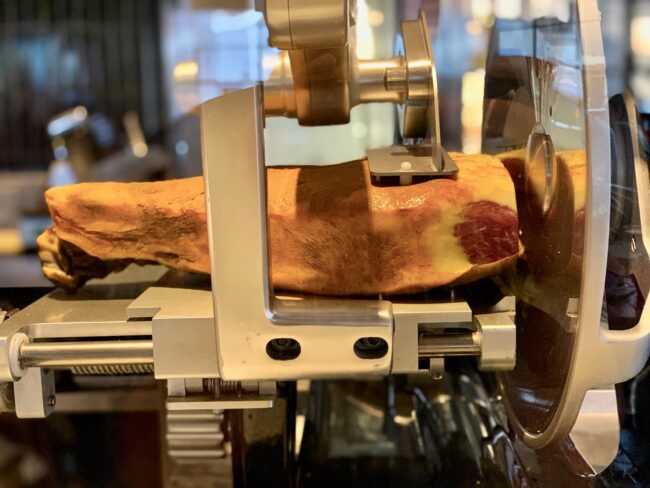 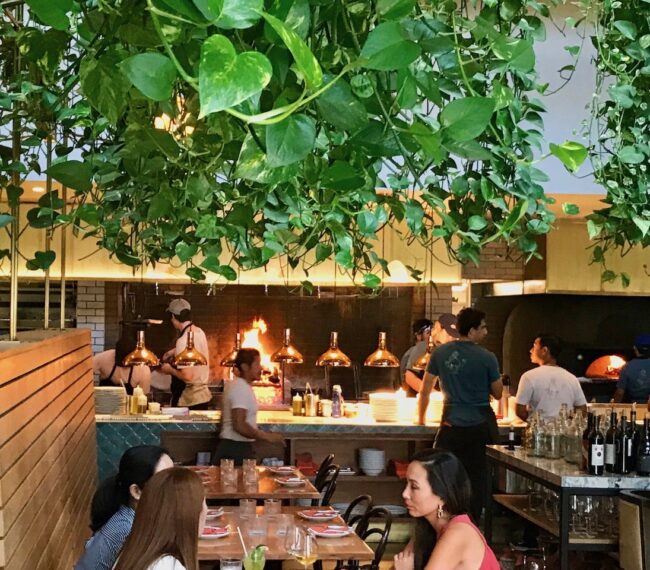 There is also a bar area where you can dine. 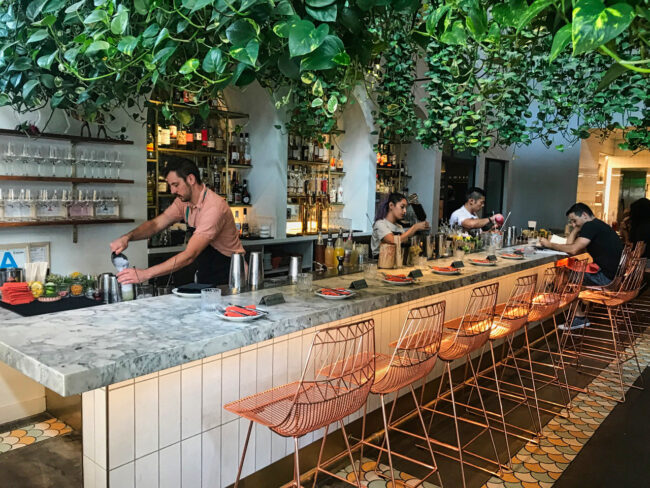 To start, Paul ordered the Aram, which was a Shandy cocktail made with gin, grapefruit, honey and apricot, lager, cucumber and black pepper ($15).

I selected the Nebuchadnezzar (ostensibly because of its name); an Old Fashioned made with lamb fat bourbon (I kid ewe not … I’m not pulling the wool over your eyes), blue plum brandy, smoked ice and grapefruit peel ($17).  Putting two and two together (hey, I got an A in Math 3 at San Diego State), the Nebuchadnezzar name made sense, since inside there were those hanging plants. For those who might have forgotten their ancient history, the Hanging Gardens of Babylon once graced the capital ruled by King Nebuchadnezzar II. They were one of the “Seven Wonders of the Ancient World.”  Tracy ordered a special martini. 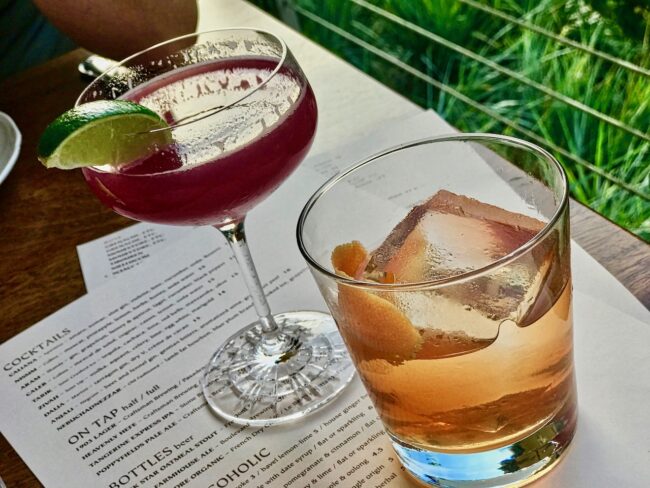 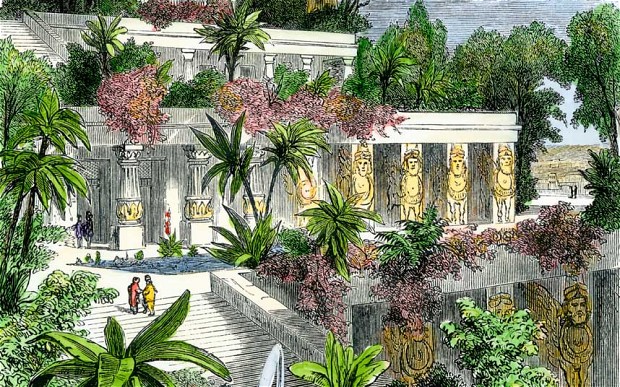 As we see so often these days, there was a giant, square ice cube in my drink.  Tracy pulled the ice cube out, and the drink itself was basically one finger of booze for $17. The lamb fat bourbon was a shear delight, and I have to admit, even though I paid so much for the cocktail, I did not feel fleeced.

There is a very expensive wine list, which includes wine by the glass, and the corkage is $35. (This photo, along with a couple of others were taken by our friend Garrett, who originally recommended this restaurant.) 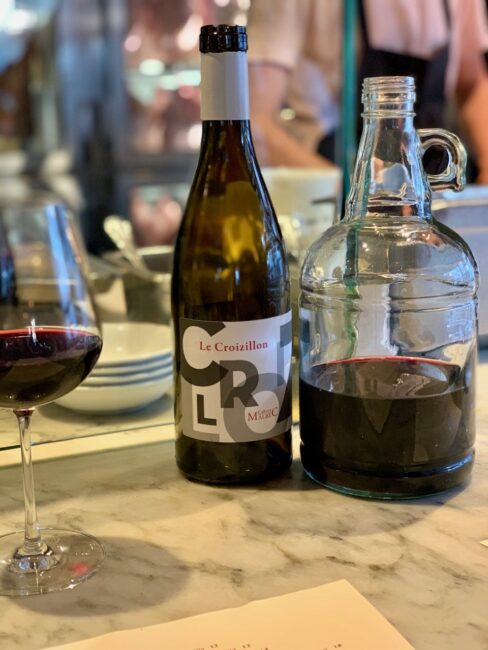 Our waiter, Richard, was great.  He made suggestions and answered our myriad of questions in detail.  He was obviously very knowledgeable about the menu.  Richard advised we pick six or seven dishes for the table to share, and then share one or two entrées.  Being the ravenous eaters we are, we complied.

We started with the Hummus and Baba Ghanoush, which I originally thought was a song by The Who.  The song, of course, is actually Baba O’Riley, and I promised myself I Won’t Get Fooled Again by the name of this dish.  Both of these starters came with heavenly, fresh out of the oven pitas.  The Hummus, creamy and chunky garbanzo beans, Jerusalem mix spice and herbs ($13) was great, but only came with two pitas to share which really isn’t enough for all the hummus you get.  (But then again, if you get filled up on all those delectable pitas you won’t have room for dinner.) 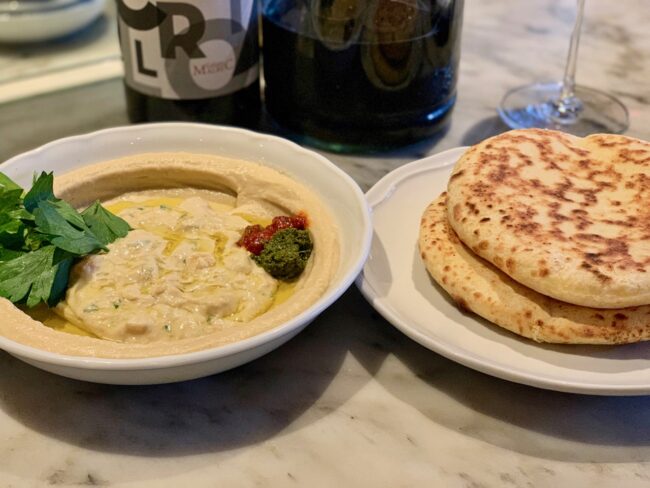 The Baba Ghanoush; smoked eggplant, mushroom and eggplant salad, tahini, and Thai basil ($12) was served with one fried pita that was light and crispy, but too small for four people to share.  We ordered an extra fried pita for the table ($4).  This was a “Wow!” dish. The smoky eggplant topped with Oyster mushrooms was delightful. 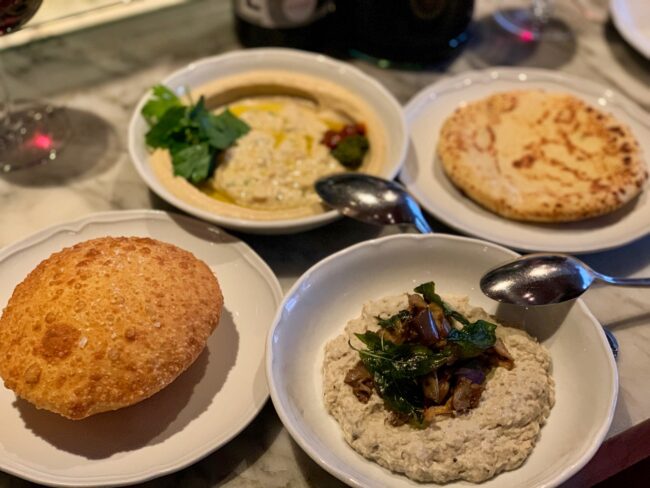 Next up from the Appetizer section, we had the Grilled Prawns (recommended by Garrett); harissa marinade, cured zucchini tzatziki with fresh herbs and lime ($24).  This dish had five, head and tail-on grilled prawns.  The harissa marinade was perfection even though it turned your fingers red removing the head and tail.  We’re giving this dish a “Wow!,” too. 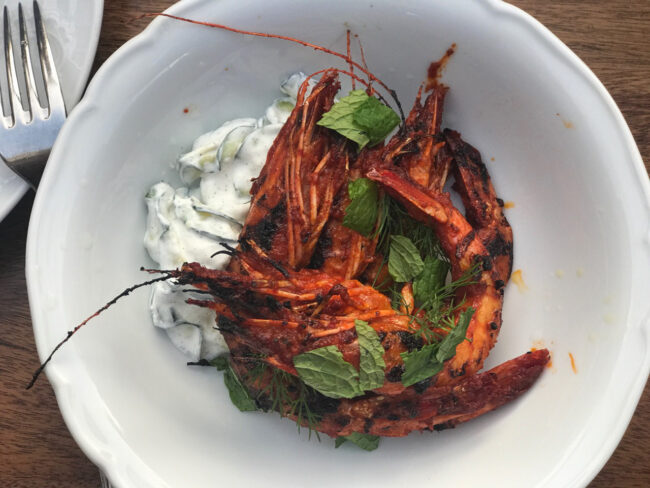 The grilled prawns were followed by an Oyster Mushroom Kebab with spinach and lovage puree ($21).  The mushrooms were skewered with a sword, which is removed tableside.  I have to fire my photographer for not getting the sword in the photo … that would be my beloved wife, in case you were wondering.  We have not tasted Oyster mushrooms before, and these were grilled over fire for a rich, smoky taste. 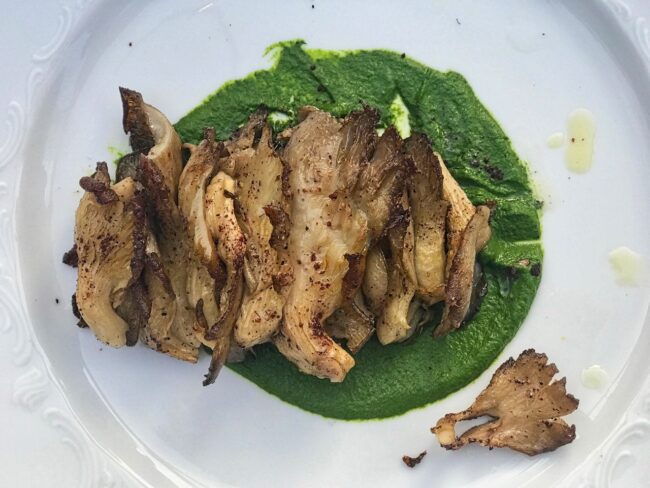 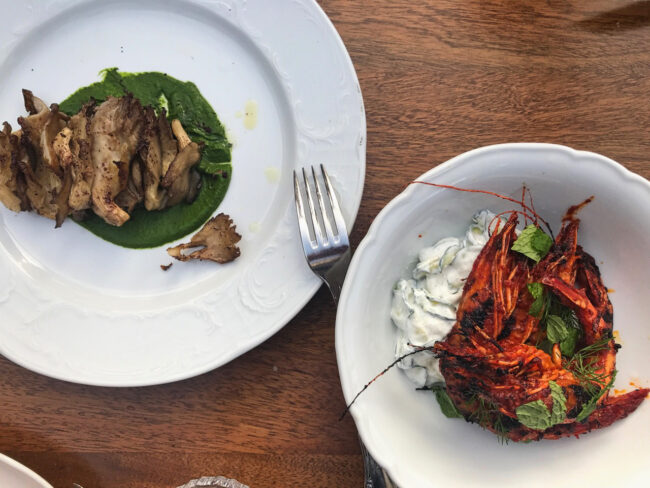 We were then served the Roasted Cauliflower, Hawaij chile sauce, lime leaf, crème fraiche Bavel – Los Angeles, CA serrano dip with pistachios and dried flowers ($18).  Tracy and I really liked it, especially the crème fraiche and serrano dip, which cooled the spiciness of the Hawaij chile sauce on the cauliflower.  Having loved both the mushroom and cauliflower dishes, the next sound I heard was my mom turning over in her grave. 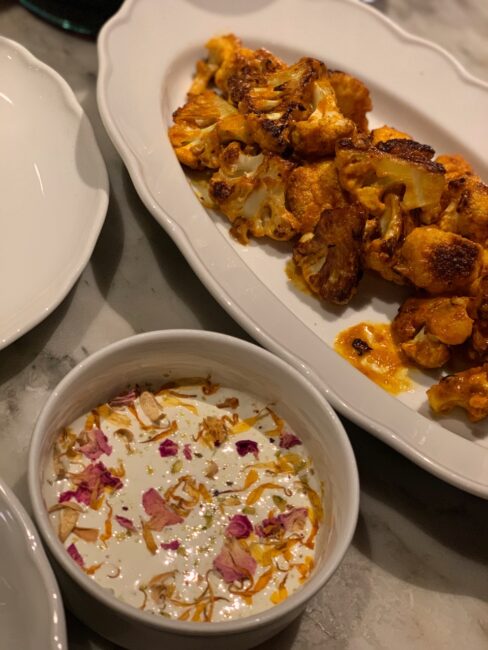 The last item we tried from this section was the Lamb Flatbread; spicy fermented sausage, grated tomato, red onion, pine nuts, nigella seed, mint and sumac ($19).  It was plenty large enough to share, and the flatbread was perfectly crispy and crunchy.  Susan was not really enamored by this dish, and next time said she would try the Malawach; ancient grain crispy layered bread, grated tomato, dill crème fraiche, soft egg and strawberry zhoug ($18).  I thought the Flatbread had a good kick to it and brought some heat, which I love. 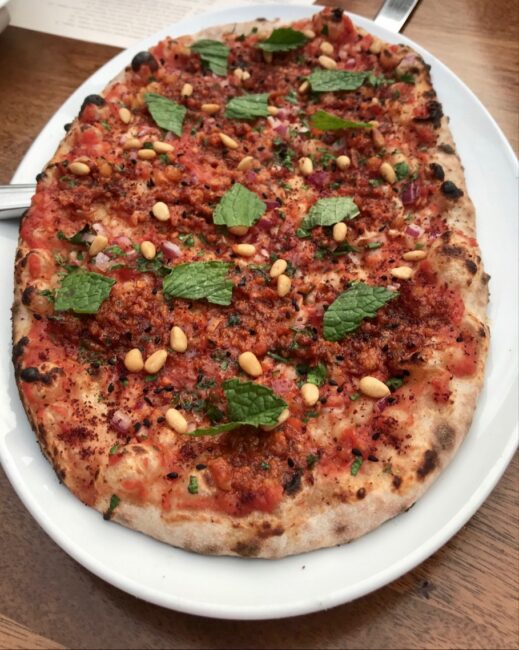 For our entrée, we shared the Braised Wagyu Beef Cheek Tagine; dried fruit, Ras el Hanout, cilantro, Serrano chile served with a mouthwatering, fluffy Couscous with cashews ($45).  They should serve the Couscous as a side … it is really that good. 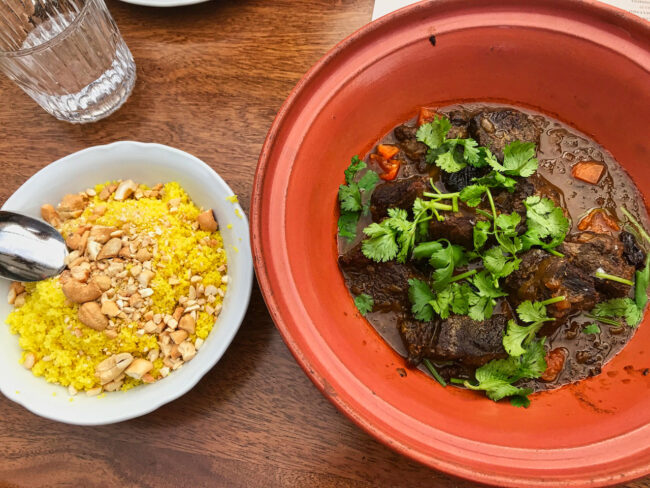 We barely had room for dessert, but, as always, managed to share the Rose Clove Chocolate Donuts; three chocolate donuts with bar au chocolate ganache and sherry diplomat cream for dipping ($13).  Although the donuts were light and airy, Tracy thought they were just “ok.”  The rest of us thought they were very good. 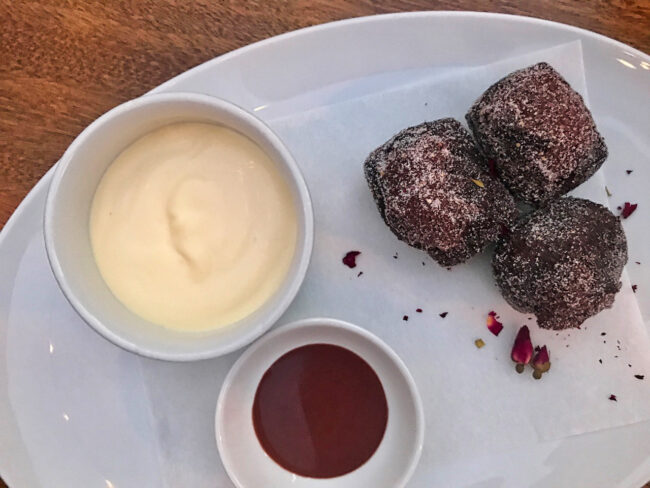 The pacing of the dishes coming out to our table was perfect … not too fast that you hadn’t finished the prior dish, and not too slow so that you were looking around for your next course.  The restaurant seems to have lots of staff to keep the pace flowing smoothly.  Every staff person was very attentive, offering frequent water refills and clearing the used plates. 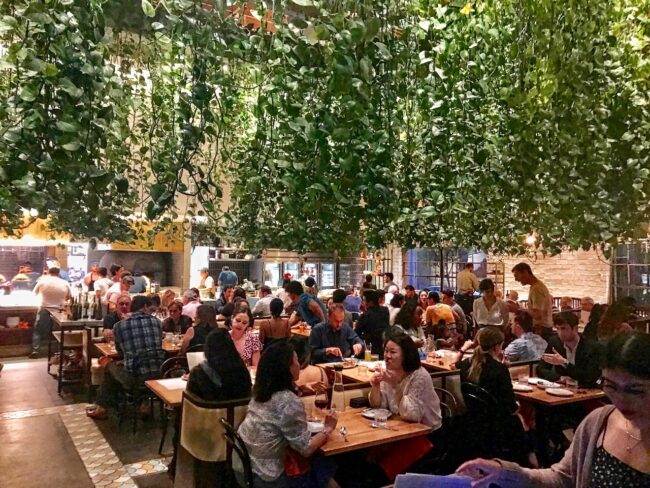 As with Bestia, Bavel has a 4% charge, which they say on the menu is “added to each guest check to ensure competitive industry compensation, as well as health and medical benefits, for all our valued full time team members.  In support of this initiative, the entirety of the charge is retained by the restaurant.  If you would like this charge removed, please let our staff know.”

Bavel is a restaurant I’d happily return to so we could try some more of its creative cuisine. It’s a beautiful space, and combined with great service along with an array of delectable dishes, Bavel is a winner.  With the addition of Bavel to the neighborhood, I guess you could really say that the Los Angeles Arts District has become the mecca of great restaurants in L.A.