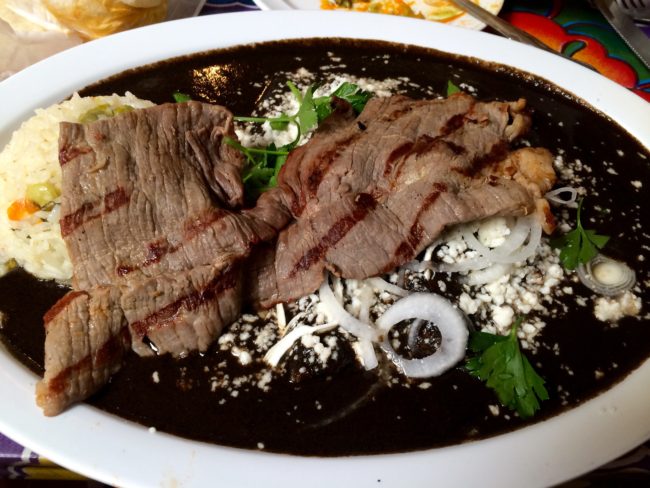 Proof positive that Los Angeles is a melting pot of cultures:  Last weekend Tracy and I dined at a James Beard award-winning Mexican restaurant…located in Koreatown…which had been recommended recently by our waiter at an Indian restaurant.  If only the United Nations worked this cohesively.   And this visit all came about quite by accident.

Ostensibly, Tracy and I were going to go take photographs at the gardens of Greystone Mansion in Beverly Hills.  After trekking out from Pasadena  to where the One Percenters reside, we were greeted by a sign saying they were closed for an event (garden photo courtesy Greystone Mansion’s website). 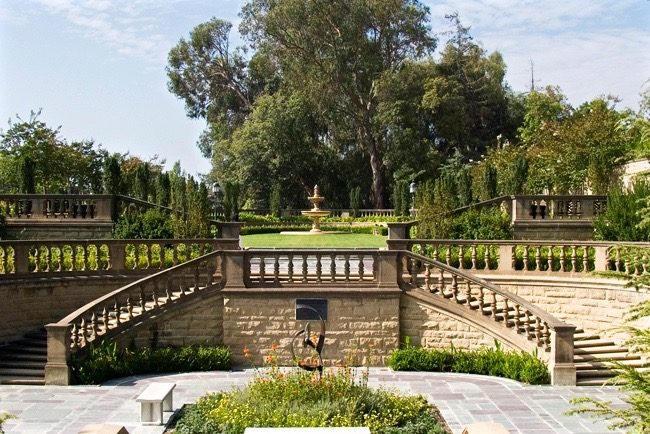 Undaunted (and now hungry thanks to our outdated GPS that sent us the long way to Greystone), we decided to head back to Los Angeles to try the famed #19 pastrami sandwich at L.A.’s iconic deli, Langer’s (sandwich photo courtesy Langer’s website). 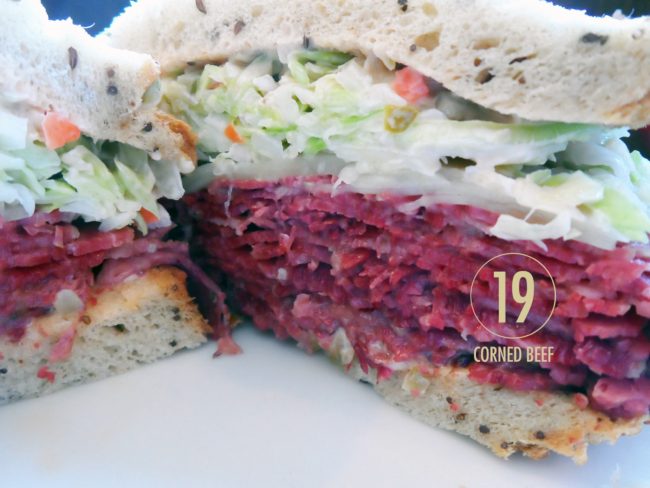 However, as we headed down Olympic Blvd., suddenly Tracy shouted out (for once not about my pathetic driving), “Hey isn’t that the restaurant that was recommended by our waiter at The Mint Leaf (See Tom’s Dining Out…Mint Leaf)?” 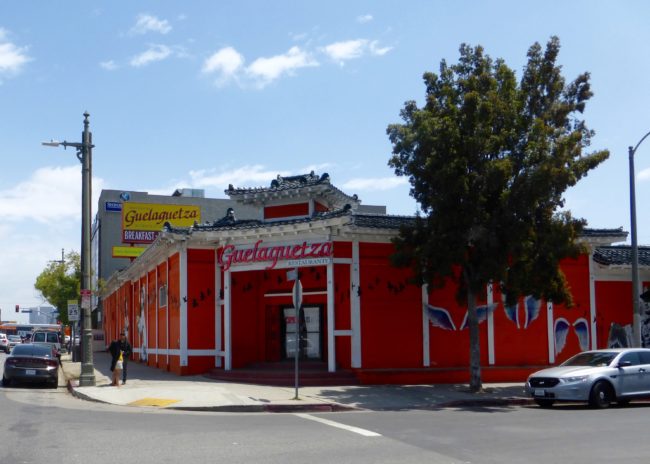 Sure enough, there on the corner stood Guelaguetza, a famed eatery known for its Oaxacan fare.  Not knowing what constitutes Oaxacan cuisine, upon arriving home I consulted the sometimes accurate (but never in doubt) Wikipedia, which states:  “Oaxacan food is based on staples such as corn, beans and chile peppers, but there is a great variety of other ingredients and food preparations due to the influence of the state’s varied geography and indigenous cultures.”

Oaxacan cuisine also features “seven notable varieties of mole sauce,” and I had been told that Guelaguetza had the best mole in town.  It must be good, because their website is ilovemole.com. Holy mole, we were ready to go! 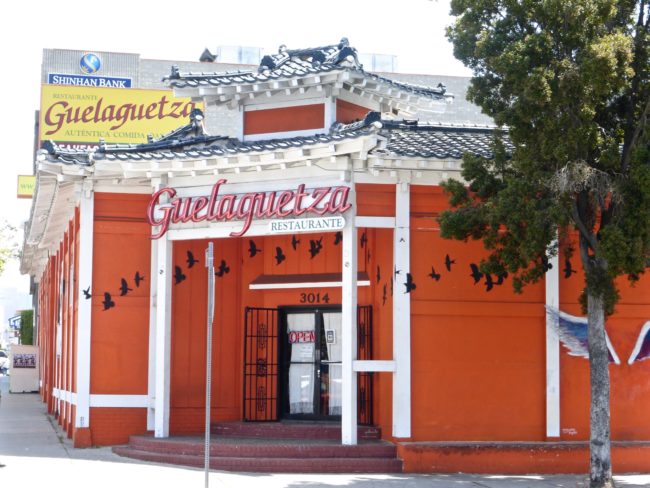 According to Jonathan Gold of the L.A. Times, “Guelaguetza Is The Best Oaxacan Restaurant In The Country.”  So instead of a pastrami sandwich at Langer’s, I made a quick (and slightly legal) right hand turn, and we parked in the adjacent lot ($3.50 valet). 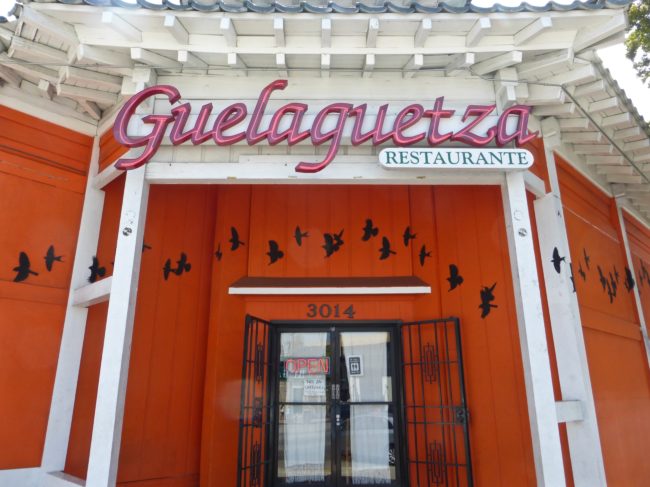 Guelaguetza was founded in 1994 by immigrant husband and wife Fernando Lopez and Maria Monterrubio. Today, it is run by Fernando Jr. with his sisters, Paulina and Bricia.  In 2015, the restaurant received a coveted James Beard Award (known as the “Oscars of the Food World”). Begun in 1998, this award is handed out to only five U.S. restaurants each year.

Interestingly, Langer’s Deli (where we originally planned to go), Philippe The Original (see Tom’s Dining Out…Philippe The Original) and Yuca are the only other Los Angeles area restaurants that have won this award, which celebrates restaurants that have been in business for at least a decade and have made significant contributions to their community, along with having timeless appeal. 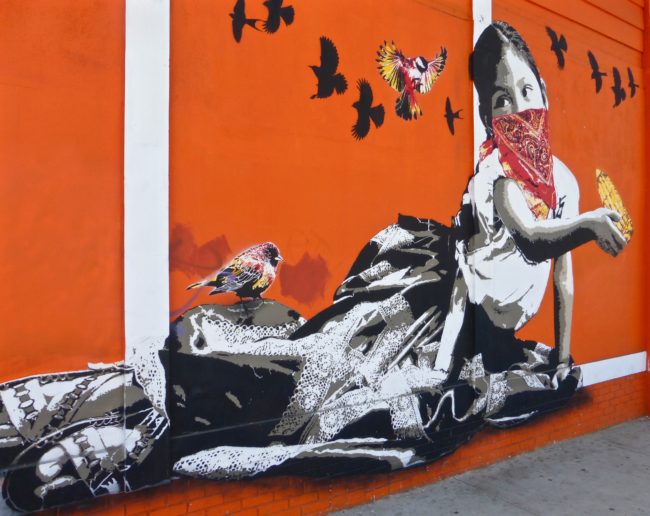 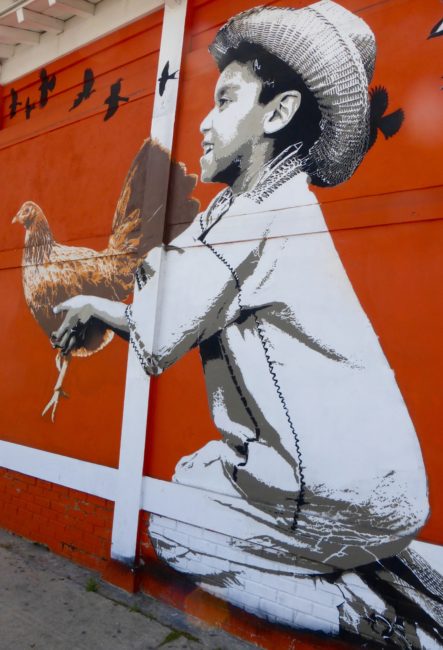 After taking a few photos of Guelaguetza’s colorful exterior, we entered the already bustling interior. We had made it just in time. Within a half hour there were a lot of people waiting for a table. 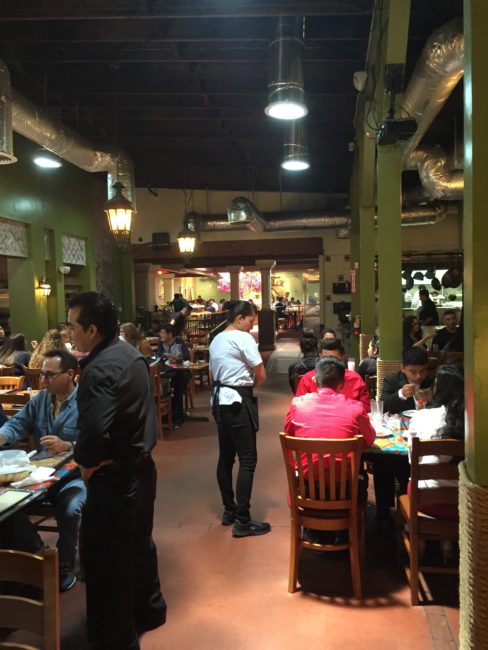 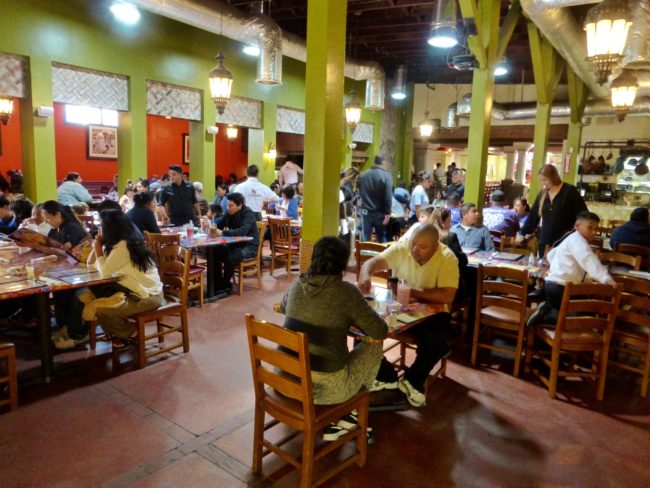 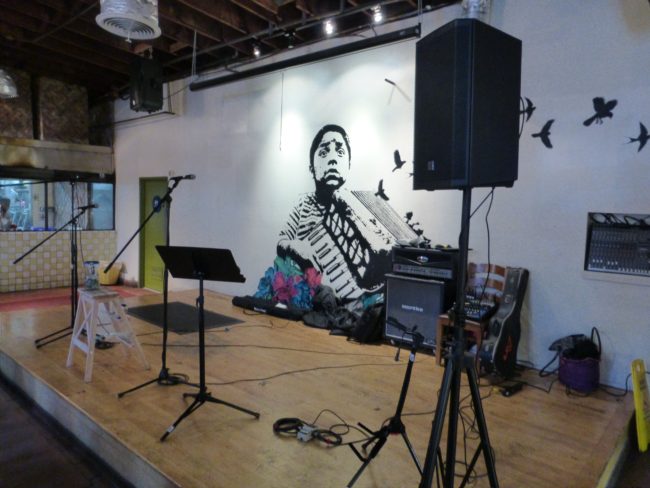 …and walked by the open kitchen where they were preparing Guelaguetza’s Oaxacan specialities. 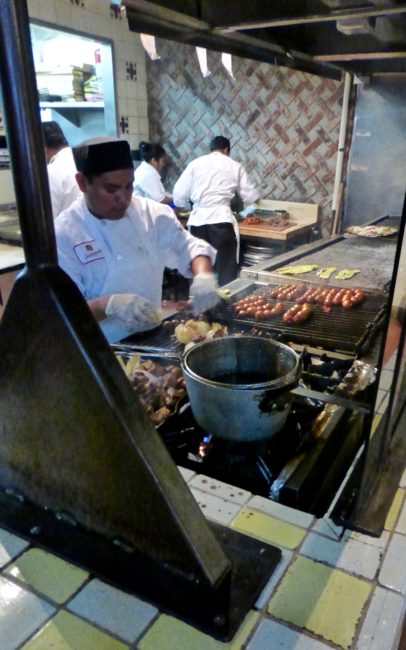 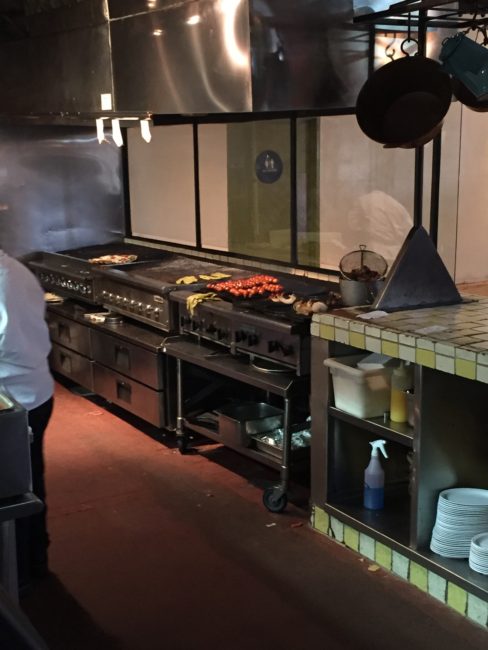 The Mezcal Bar was showing futbol. 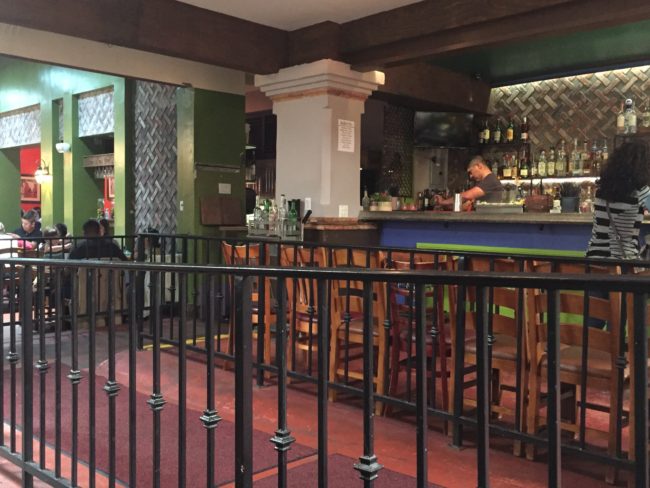 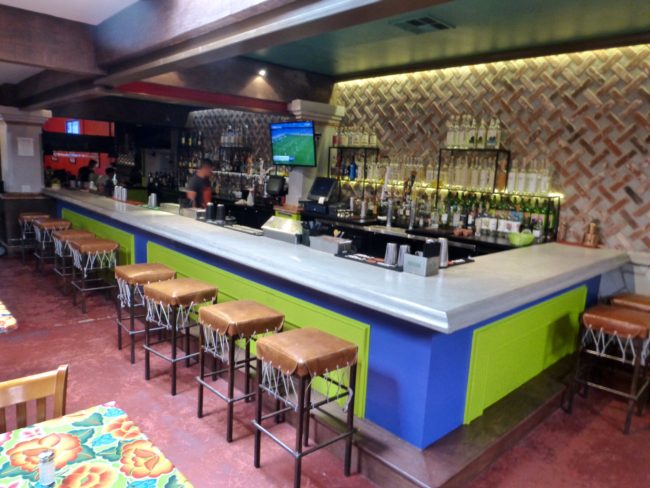 I thought about worming my way over there, but I had Mole on my mind. 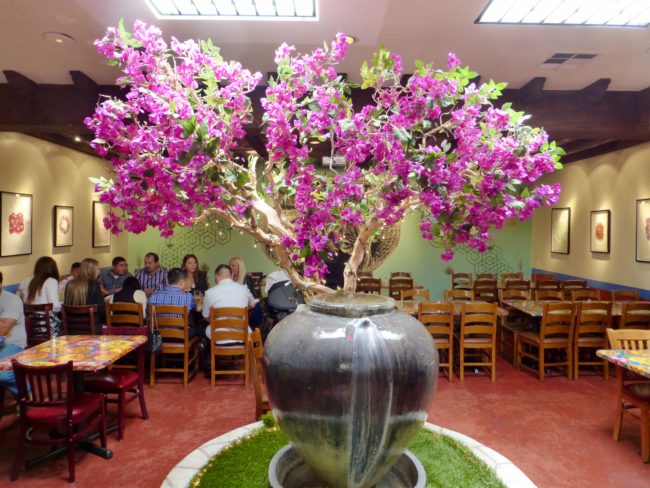 Soon after we were seated, instead of the usual bowl of stale chips, a plate of fresh tortilla chips covered in Coloradito mole was brought to our table along with menus (the chips were devoured quite quickly). 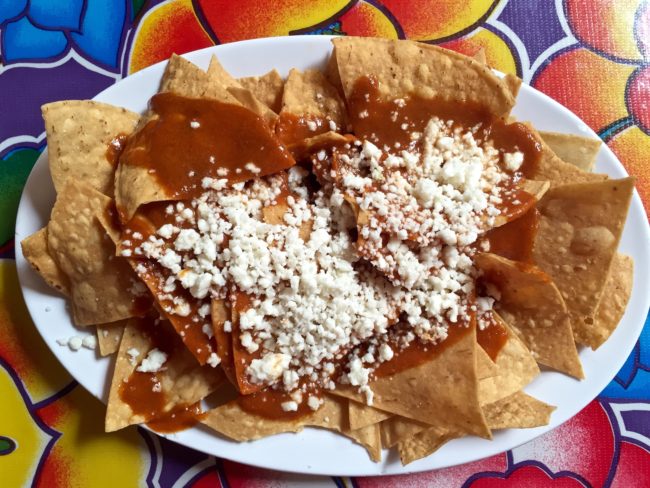 We started with an appetizer, Quesillo Fundido ($9.50), an incredible skillet dish that incorporates Oaxaca cheese, grilled chorizo and mushrooms. Tracy and I each received freshly made corn tortillas, and before you could say “traditional Oaxacan favorites,” thanks mainly to my beloved wife, the Fundido skillet was soon completely bare. 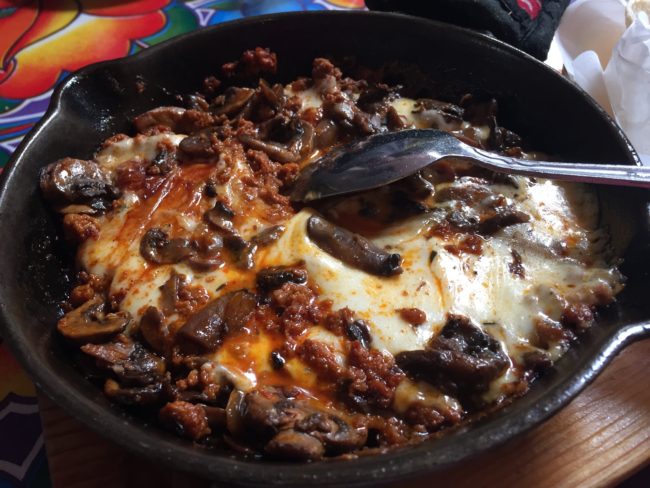 That was the good news. The bad news was we still had our main dish coming, and now Tracy was a tad full.

So when she received her Enfrijolados ($13.95, tortillas covered in black bean sauce with choice of meat or cheese), Tracy’s tummy could only muster space for a few bites. 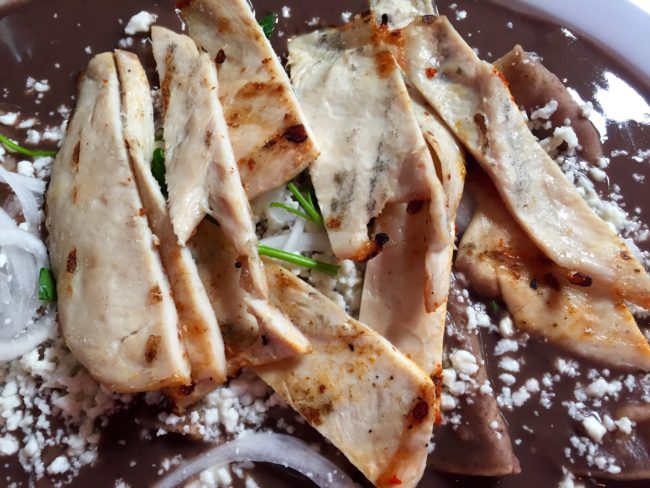 Luckily, I had not had any breakfast before departing for the day, so I eagerly anticipated my dish that would incorporate some of their famed mole negro. I had opted for Enmoladas ($14.95), which are tortillas covered (and I mean covered) in black mole and a choice of meat (I chose carne asada). Oh my!  It was a wonderful dish, and the mole had a smoked chocolate taste to it. I also put a little of the side of guacamole on it (counting calories were not on the day’s agenda).  It’s a rich dish, but I did manage to eat all of it, eschewing the accompanying rice (I had to fit in Tracy’s car for the ride home).

It was all washed down with a refreshing margarita (hey, it was almost noon).

We then perused the menu and saw that Guelaguetza serves breakfast until 2 p.m. Tracy already knows what she’s going to order next time….the Chilaquiles de Mole; black mole chilaquiles served with eggs and Oaxacan string cheese ($10.95).  I have no idea what I’m going to have, but I want to try their mole rojo on something.  I can hardly wait.

One appetizer I might pass on (although it is an Oaxacan delicacy) is the Chapulines a la Mexicana, which are sauteéd grasshoppers with jalapeños, onions and tomatoes served with Oaxacan cheese and avocado.  Who knows, maybe that’s why the joint was jumping.

They also have Taco de Barbacoa de Chivo, young goat wrapped in a handmade corn tortilla.  I thought about it for a second, but passed remembering what a good kid he was growing up.

We bid “adios” to our attentive waiter and as we wandered back through the packed restaurant, we realized that Guelaguetza is more than just a restaurant…it’s also a shop. 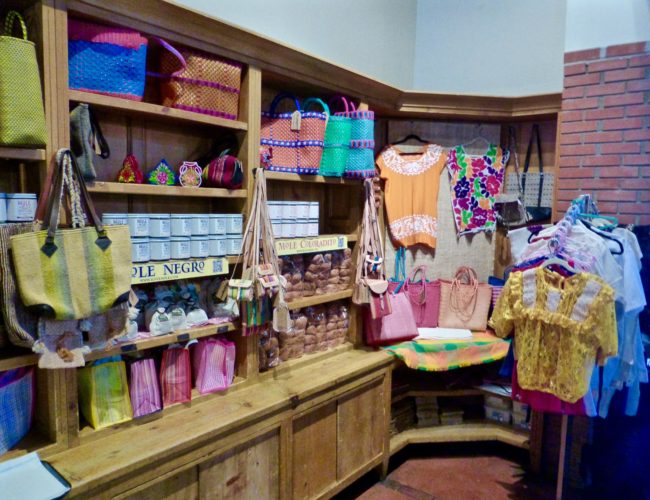 In the front there is an area where you are able to purchase Guelaguetza’s array of moles (a 16 ounce jar is $12 or you can buy a “Festival de Mole Bundle”…three different moles…for 32 bucks). 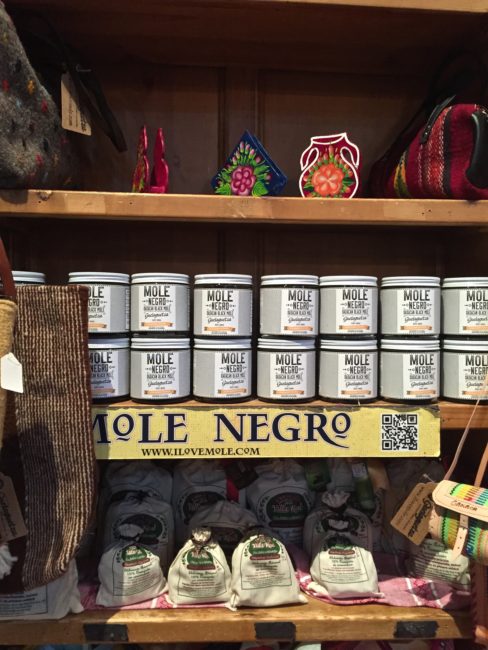 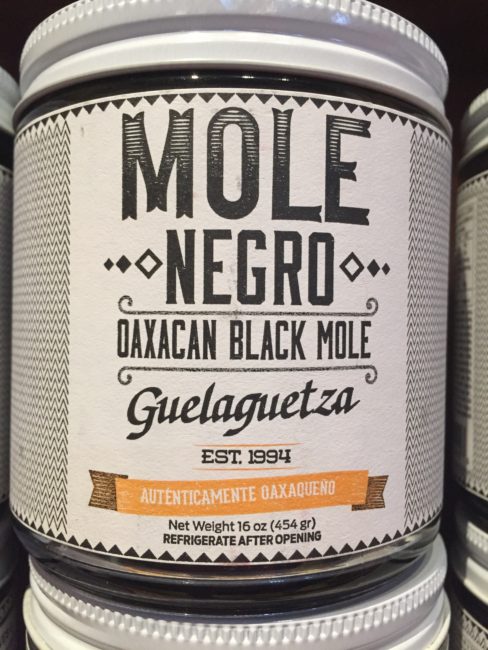 There’s an El Mexcalero print, which is the same as the one painted on the back wall of the restaurant. 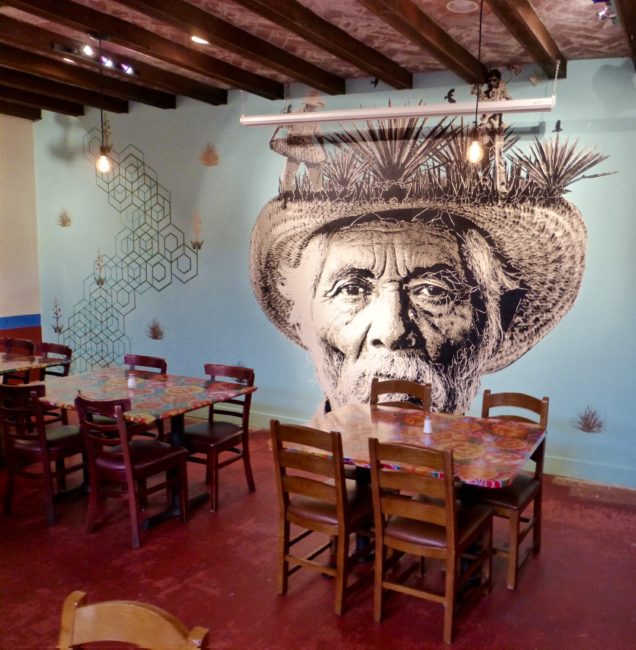 You can also purchase colorful totes… 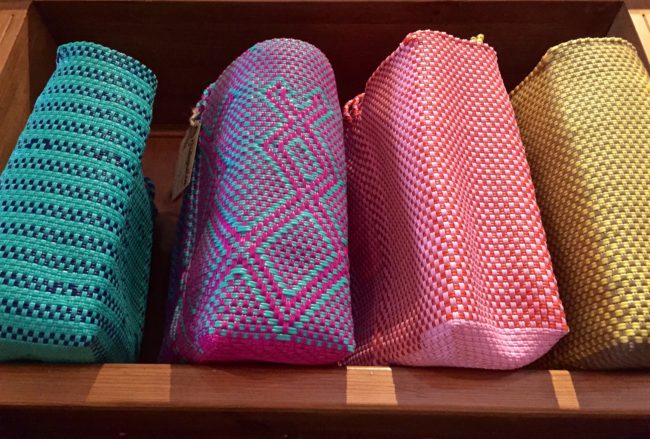 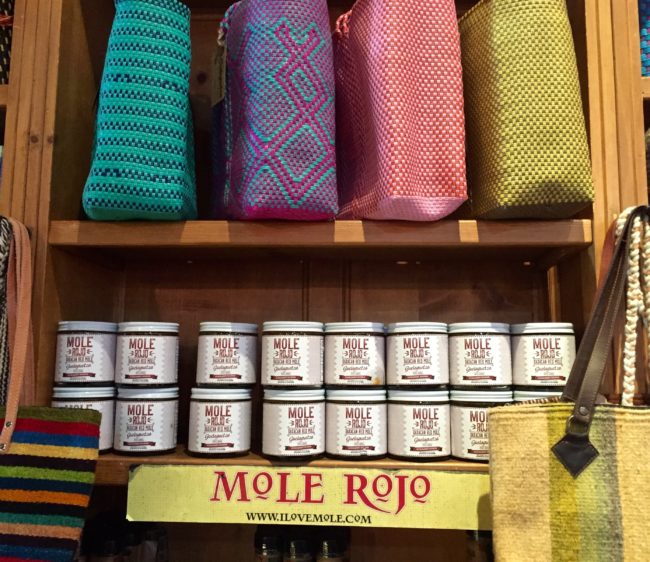 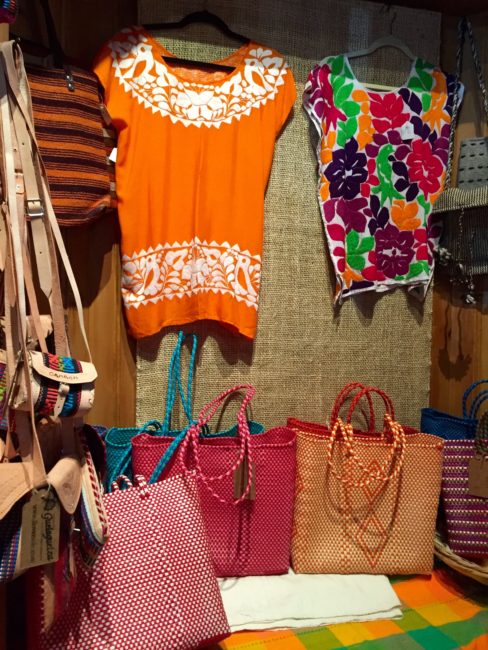 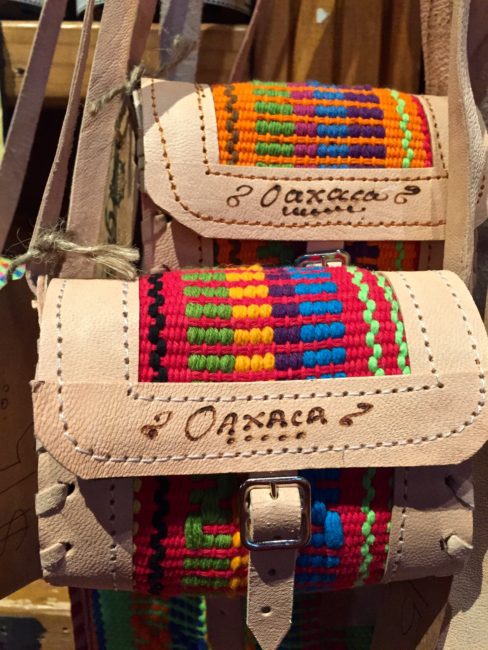 Finally, if you’re not full enough, pick up a dessert to go. 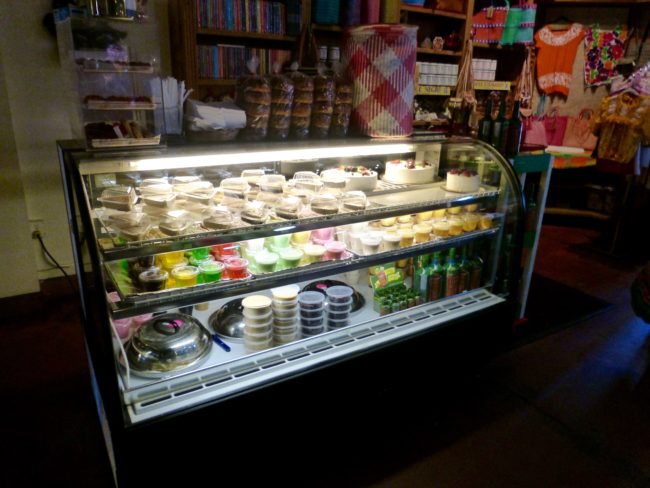 Our morning experience was yet another reason why I absolutely love L.A. No matter where you drive, you’re bound to run into something unexpected; restaurant or otherwise. 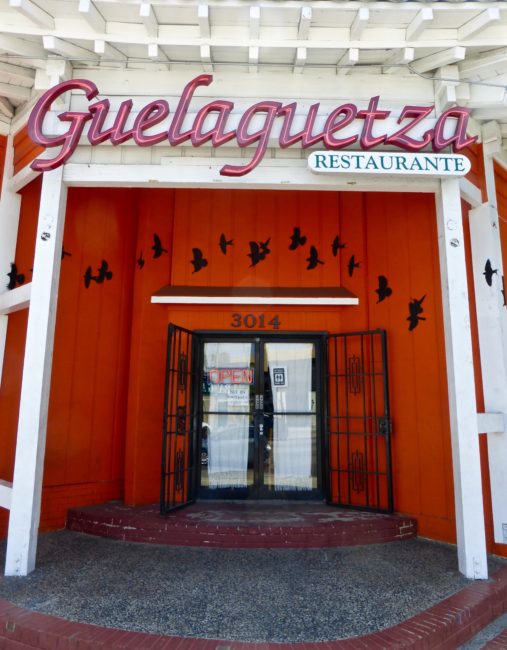 Soon, we are going to gather some hungry amigos and make a return trip to Guelageutza. If you endeavor to enjoy some authentic food from south of the border, this is your perfect stop. “De nada!”