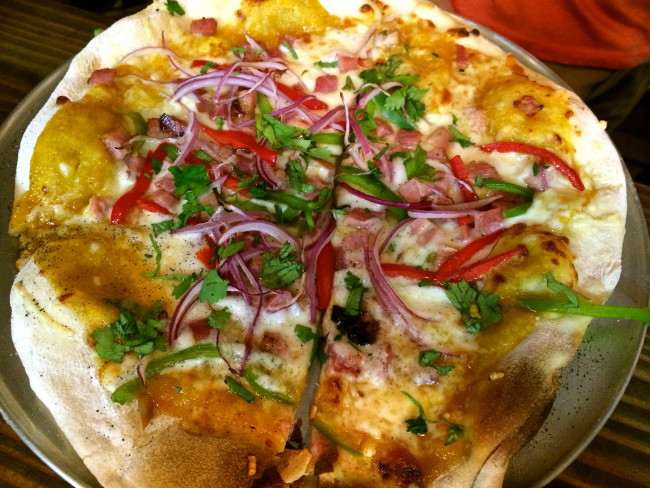 Tracy and I had a hankering (hmm, watching too many westerns lately) for a pizza a couple of Fridays ago, and fortunately our friends Tyler and Sayda said they knew a great pizza joint (foreshadowing…they were correct) in Altadena, not too far away from either of our homes.

Tyler stated that one of his favorite places for pizza is Pizza Of Venice.  I immediately thought, “In all the times we have visited real Venice, I’ve never had pizza there,” but since Tyler recommended it…he introduced us to the great AltaEats (report is on this site), so his recommendations are not to be taken lightly…we said, “Let’s give it a go!”

We met them at their house, and after a delicious Tyler “Lemon-Lime, Cilantro, Vodka” cocktail concoction (recipe on this site soon)… 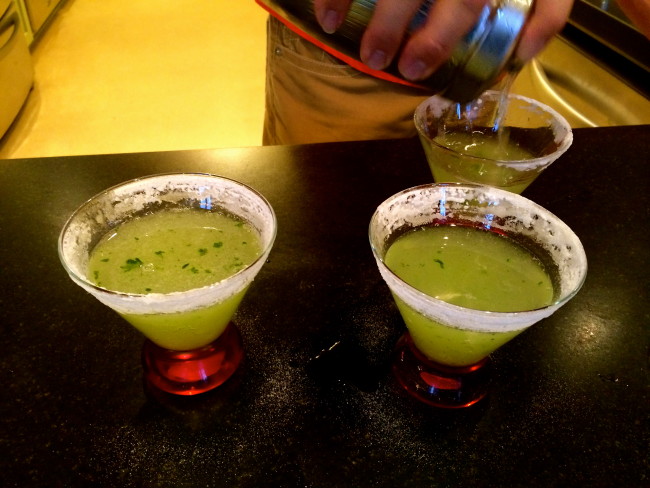 … hopped in the car (also coming along were their friend, Jackie, and Tyler’s mom, Karen), and drove a short distance to a non-descript strip mall on North Fair Oaks in Altadena. When it comes to restaurants (especially these days), I adhere to the old adage, “Never judge a book by its cover.”  Butch and Sundance would be right at home in this little Hole-In-The-Wall. 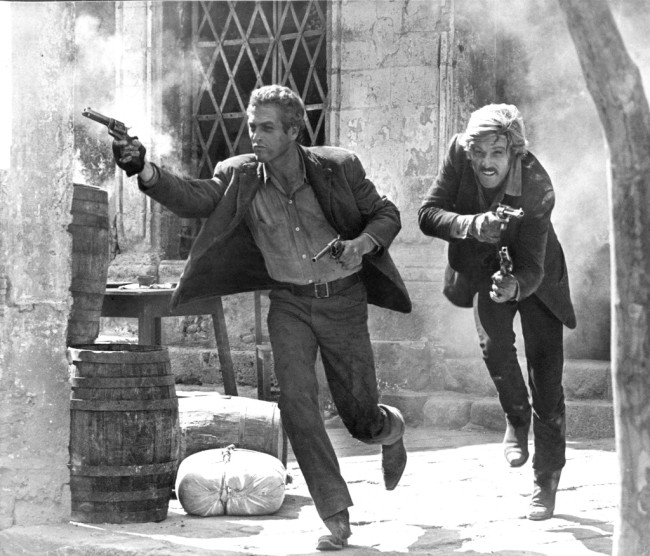 I had checked out the Pizza Of Venice website before we went and it said, “We believe in Homemade and Locally Sourced Ingredients.”  We would soon find out just how delicious those ingredients were. 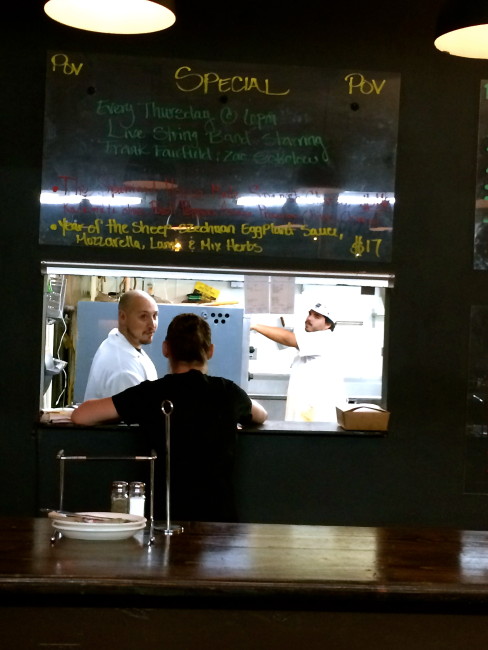 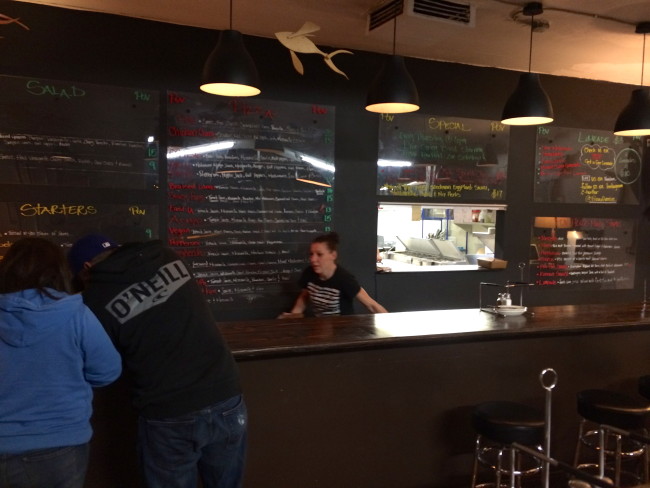 When we walked in to Pizza Of Venice a little after 7:30, we were the only people inside except for the cheerful hostess and the guys in the back baking those pizzas.  The six of us sat down at the large communal table. I had read numerous terrific reviews of this place, so I thought it would be packed, and, sure enough, not more than a half hour later, Pizza Of Venice was cranking. 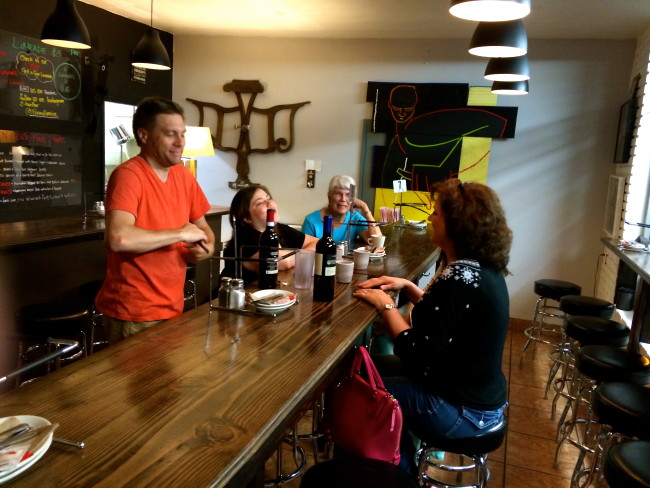 Although there were only six of us, we ate for 12 that night.  First up were the starters. 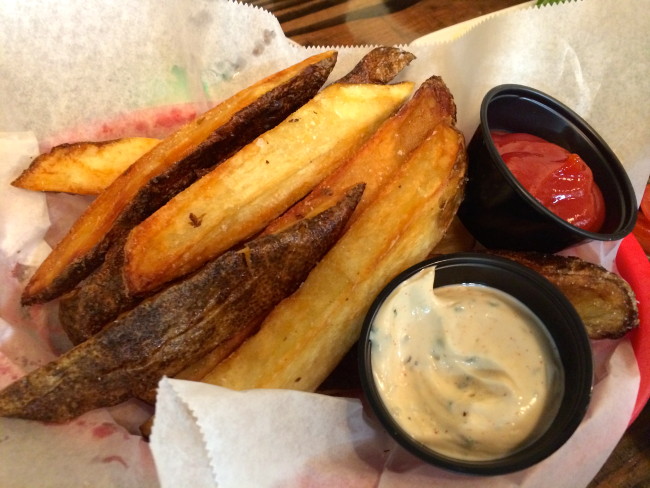 We purchased the Belgian Fries that come with Chive Aioli and Ketchup ($6).  The fries were large enough to serve as the foundation of a building and they were quite delicious (loved the Chive Aioli). 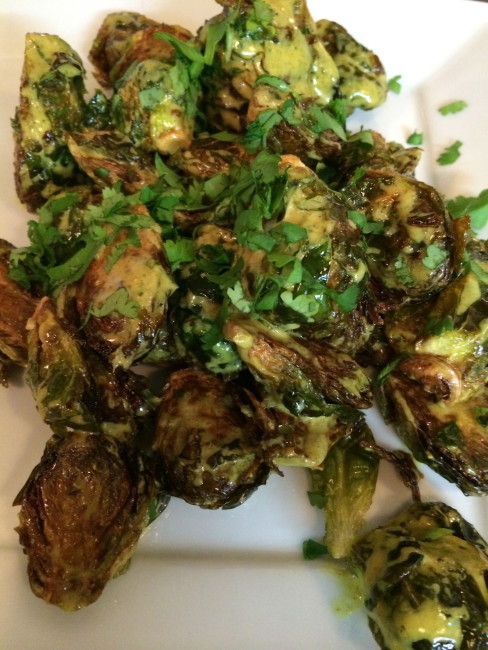 Also really good were the Brussels Sprouts ($9), fried and tossed in your choice of sauce…Korean, Curry, Habañero (spicy) or POV hot sauce (really hot).  We chose the Curry, which was a yellow, Caribbean coconut curry sauce. 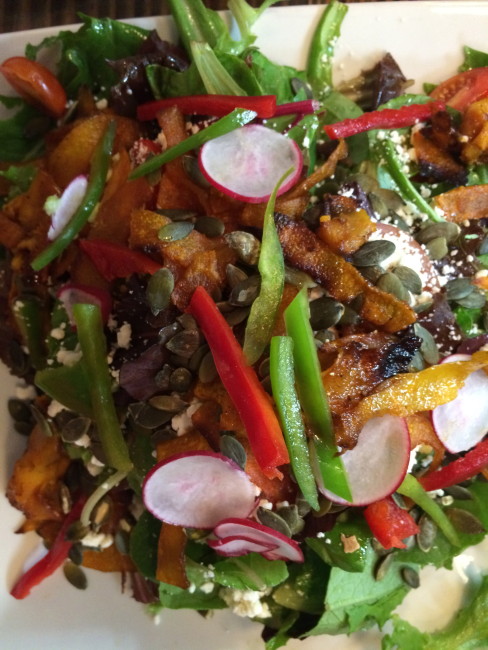 Next it was time to move on to the salads, which were equally as good.  The House Salad consisted of mixed greens, goat cheese, cherry tomatoes, almonds, radish and a house vinaigrette ($9). 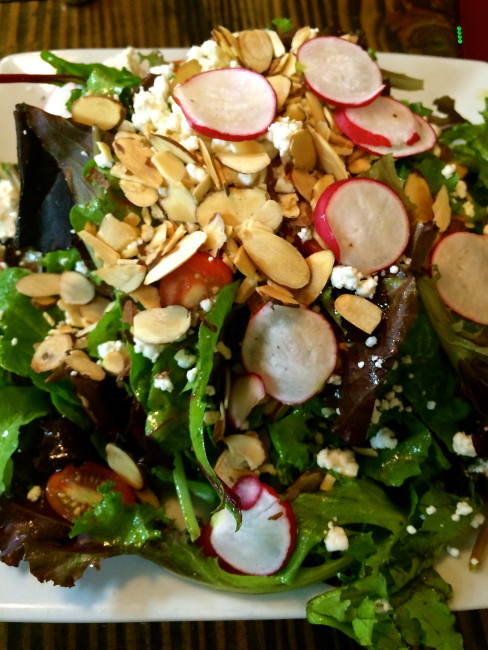 Not satisfied with just one salad, we also ordered the Altadena Pumpkin Salad (Roasted Pumpkin Vinaigrette, Pumpkin Seeds, Roasted Pumpkin Slices, Mixed Greens, Bell Peppers, Feta Cheese, Cherry Tomatoes and Radish Slices).  It was 15 bucks, but it is big enough for an army (or at least a regiment) to share.

At this juncture, I might interject another big plus for Pizza Of Venice…No corkage charge!  They give you coffee-type mugs to enjoy your vino. 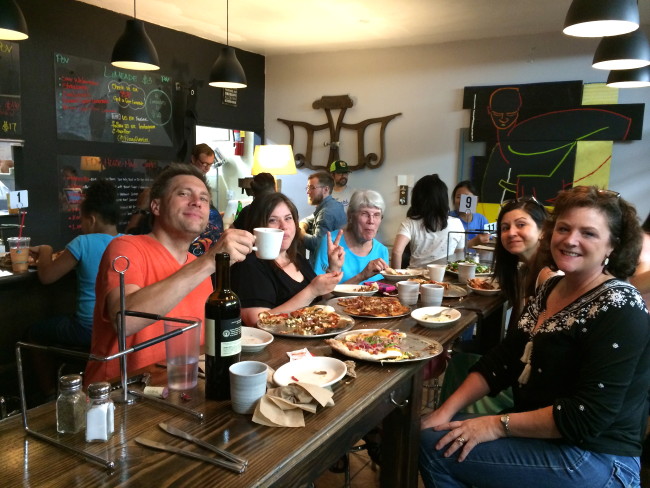 By now, our communal table was full, the front bar was nearly full and people were coming in picking up pizzas for take-out.  We had some interesting conversations both with regulars (who love this place) and newbies like ourselves (who were quickly falling in love with Pizza Of Venice).

Speaking of pizzas, it was now time for our orders to come out…all FOUR of them (I told you we ate a lot).

The first pizza is what I now contend is the best pizza I have ever eaten…the H.M.H ($15).   It is topped with Habañero Mango Sauce, Mozzarella, Asiago, Ham, Red Onion, Bell Peppers and Fresh Cilantro. 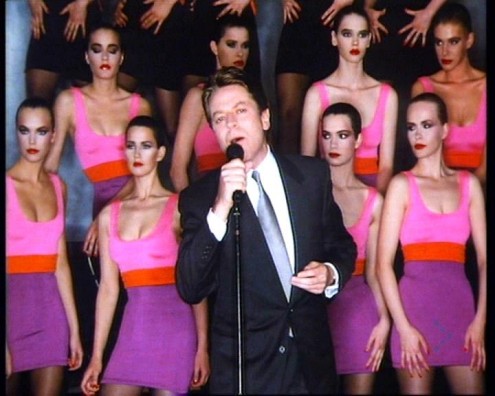 As Robert Palmer would say (if he were alive), “Simply Irresistible!” 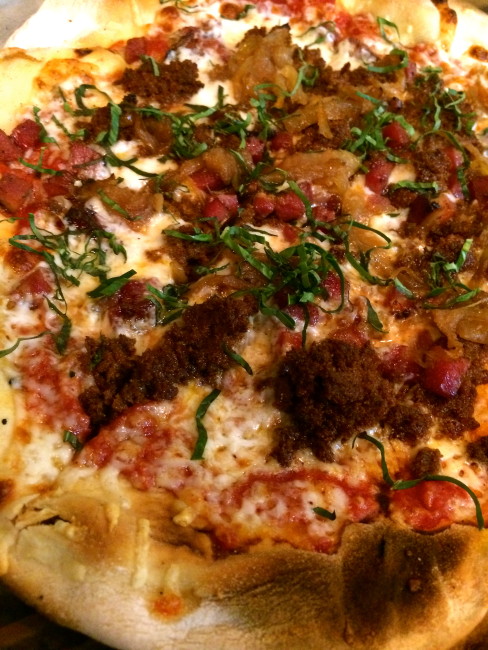 We also all tried the Asiago ($15), topped with Mozzarella, Asiago, Tomato sauce, Caramelized Onion, Chorizo and Ham…garnished with Basil.  Pizza of Venice was on a roll, which coincidentally is what my stomach was starting to resemble. 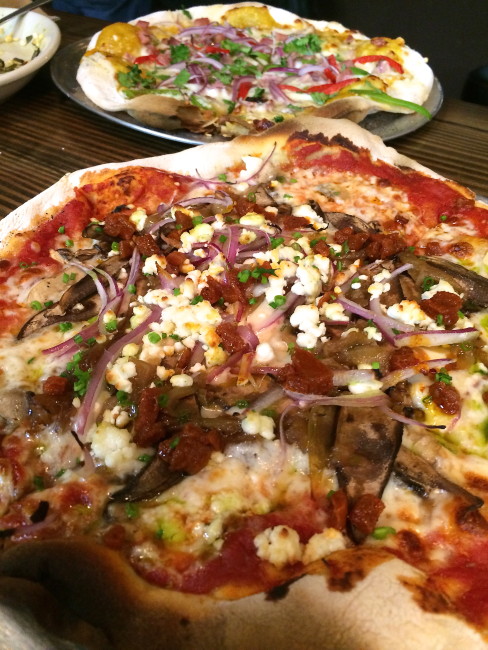 Batting third in the pizza lineup was the Saucy Fungi (which is what I was called in my younger days).  It’s also 15 bucks and is topped with Mushroom Mix, Goat Cheese, Mozzarella, Caramelized Onions, Chives and Tomato Sauce.  They also have it sans sauce.

Finally on the “Glutinous Pizza Tour” was a pizza that contained gluten-free crust.

From the Pizza of Venice website, “Pizza of Venice offers a gluten free option. We thinly slice russet potatoes and fry them until crispy. Then we take those slices and form a pizza crust.  Then they can be topped with any of our pizza creations. Pizza Of Venice adds…”This option is not suitable for people with severe gluten allergies” and “Gluten Free Crust is made to order and takes time…we appreciate tour patience in advance.” 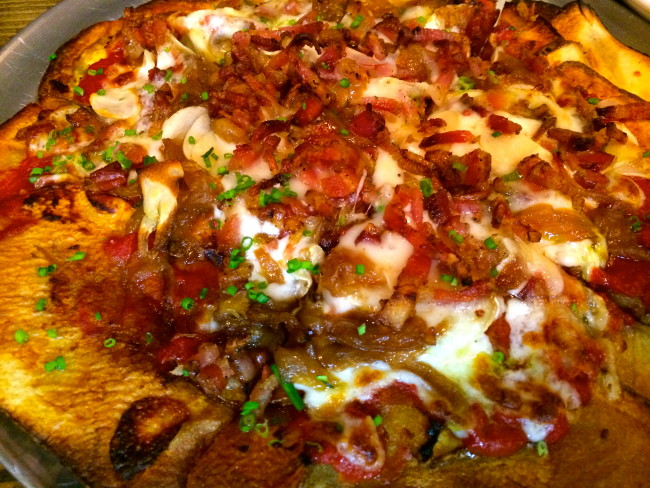 The bill came out to just about $20 per person (plus tip), a bargain when you also consider that there was no corkage. 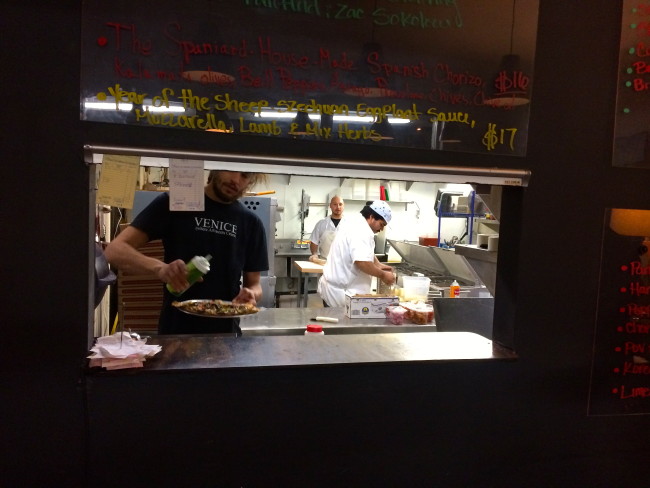 As we found out last night, Pizza of Venice also delivers ($20 minimum order and $3 delivery charge…plus generous maitaitom tip…to our neighborhood, so Tracy and I split an H.M.H. (that Habañero Mango Sauce is truly amazing), Brussels Sprouts and Belgian Fries. Well, we really didn’t split the fries, because I ate them all before Tracy had a chance (selfish husband error, but a delicious one).

Somehow I have a feeling that this summer will bring many evenings of Pizza Of Venice delights. It will also force me to make many more visits to the gym, but that seems like a very worthwhile tradeoff so I can continue to enjoy their delicious food.