The Meat Of The Matter: Pasadena’s Classic American Steakhouse 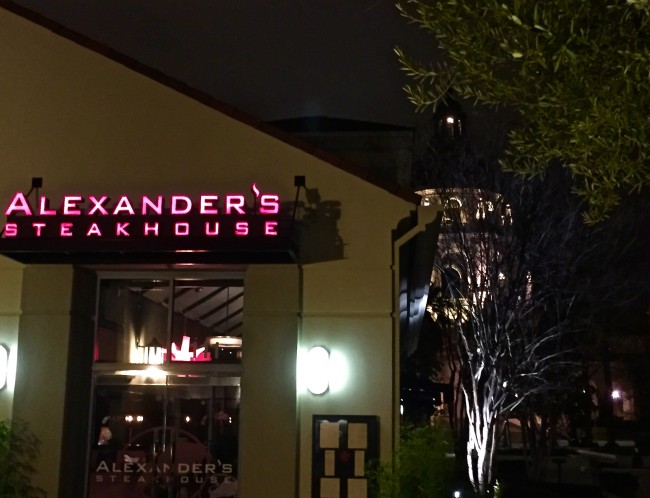 Thanks to the generosity of subscribers Joanne and Judy, we dined at a relatively new restaurant in Pasadena that is definitely in contention for MaiTaiTom’s 2016 Restaurant of the Year…and it’s only January!  Never in my life have I tasted a better steak, and I’ve devoured a lot of steaks in my life.  It’s not cheap, but sometimes you have to splurge to eat the best (plus a couple of birthday gift cards for Tracy from the aforementioned women helped, too)

Alexander’s Steakhouse is a small chain that started in Cupertino, CA, in 2005.  They opened the Pasadena location six months ago and, with barely any advertising and basically only through word of mouth, they have been packed consistently since its opening.  In fact, Tracy learned of this restaurant from someone in Beverly Hills.  I hadn’t heard of this place until early December. 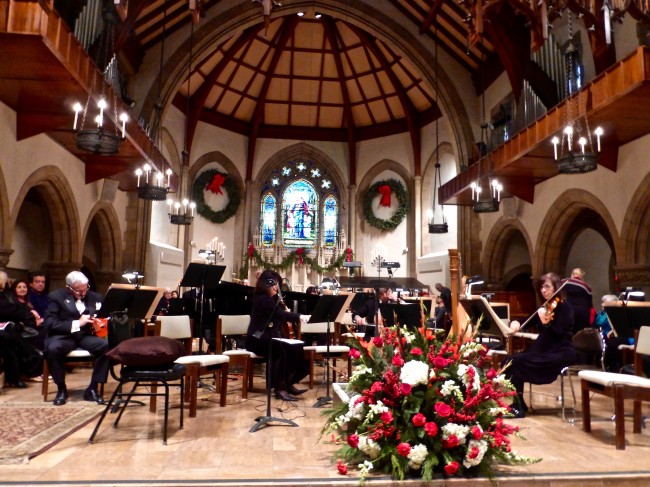 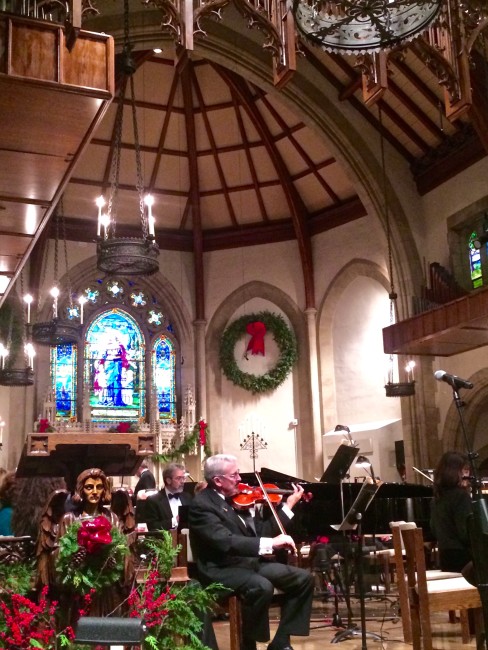 We stopped in to Alexander’s one rainy evening in December after the Pasadena Symphony performance at nearby All Saints Church (photos above).  The restaurant, located in the old McCormick & Schmick’s space, is also in close proximity to Pasadena’s beautiful City Hall. 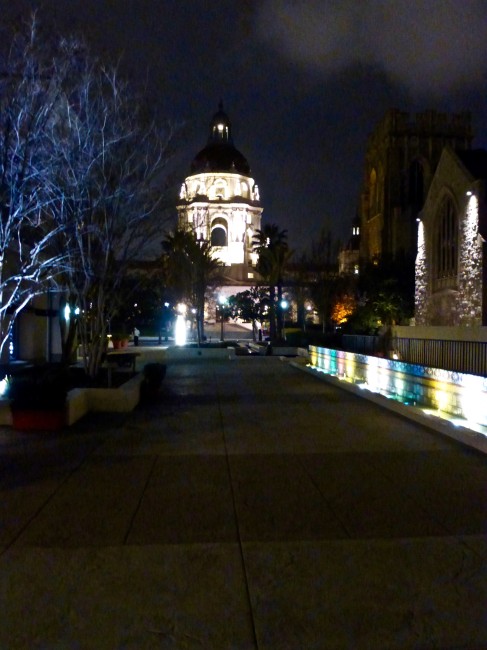 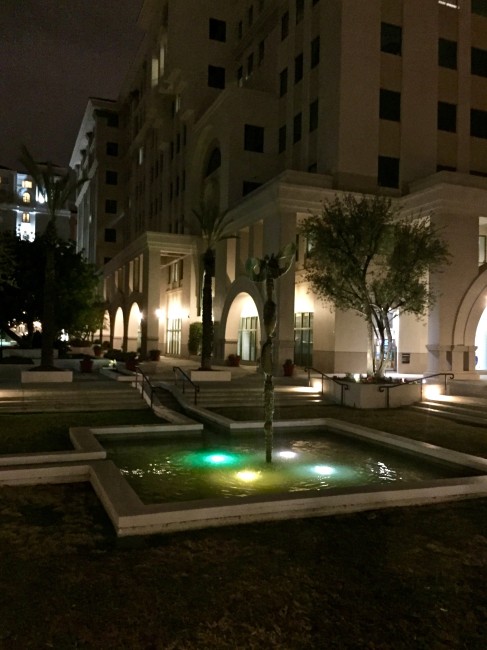 We were there right when they opened at 5 p.m.  It was a good thing we weren’t planning on eating as they were fully booked for the evening.   Sitting at a table in the bar area, we consumed the best Manhattan cocktail ever (I’ve had more of my fair share of those as well). 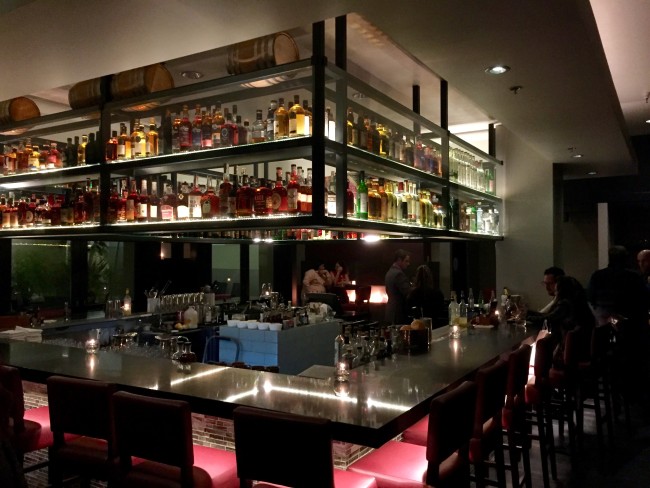 The bartender revealed the secret to mixing an excellent Manhattan…rye whiskey (he recommended Rittenhouse), excellent sweet vermouth (Carpano “Antica Formula” Sweet Vermouth from Italy, which was developed in 1786), which you should keep chilled, and then gently stir…don’t shake…otherwise you will bruise the spirits.  A twist of lemon and my, oh, my, what a cocktail!

As we sipped that great Manhattan and chatted with the personable general manager, we decided to come back with our friends to check out this steakhouse.  Our reservations were for 7:45 on a Saturday and when we arrived it appeared every table was booked.  The restaurant is filled with a friendly and well trained  staff. 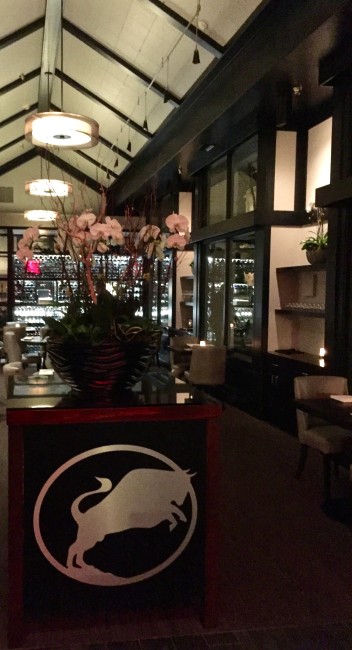 When you enter the restaurant you pass the open kitchen on the left (we took these at the end of our terrific dinner). 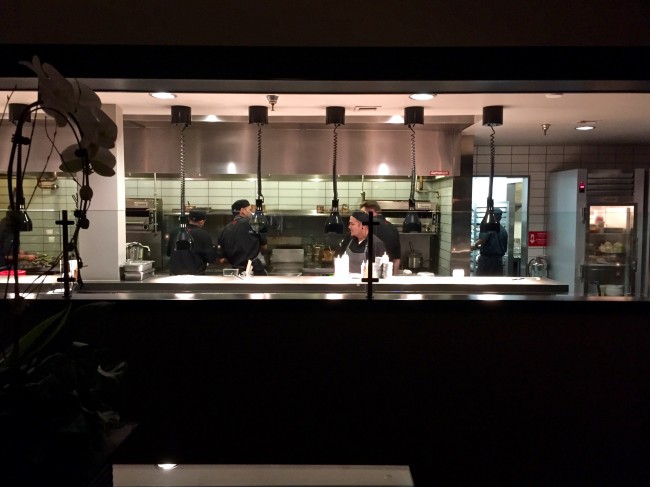 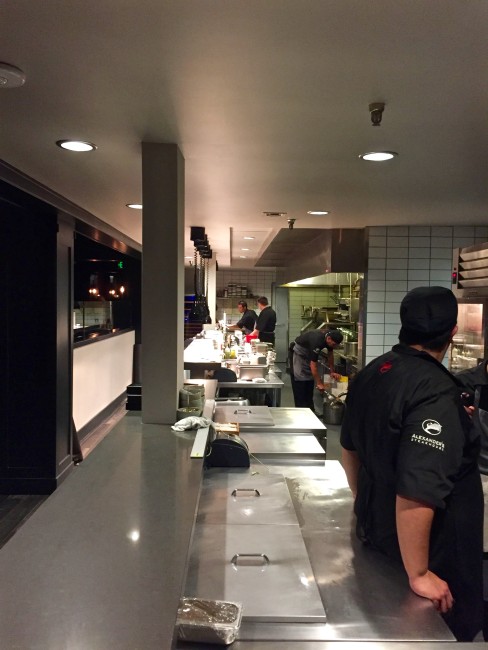 There are three large dining rooms, and they filled up as the evening progressed. 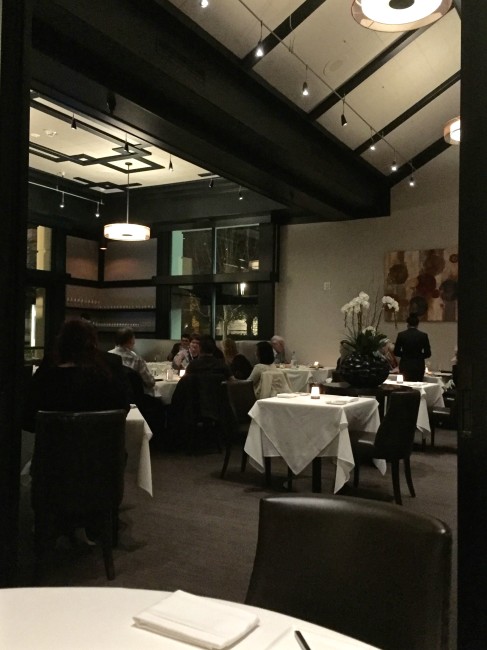 Our waiter, Jordan, explained the restaurant’s philosophy. To quote from the website, “…a fine dining interpretation of the classic American steakhouse with hints of Japanese influence laced into the menu.”  She also gave us a little history of the restaurant (they just opened one in Taipei in late 2015 and are looking for other Southern California locations), the different steaks and how the menu worked.

Also from the website: “Alexander’s Steakhouse features Certified Angus Beef, corn-fed from the Mid-West. We have our own dry-aging room and are proud to feature 28-day dry-aged steaks for unparalleled flavor. In addition to our American beef, we also serve imported wagyu beef.” Wagyu which means “Japanese cow” and (from Wiki) “is any of several breeds of cattle, the most desired of which is genetically predisposed to intense marbling and to producing a high percentage of oleaginous unsaturated fat.  The meat from such wagyu cattle is known for its quality, and commands a high price.”

I settled in with a Manhattan (I had to see if it was just as good as before…it was) to start, while Tracy, Joanne, Xochitl and Helen (yes, just me and four women…eat your heart out Justin Bieber) ordered a bottle of champagne as their spirit of choice.  You should be warned, this is one expensive wine list (perhaps my only complaint is that Alexander’s should have a few affordable wines on its list).   The corkage fee is $35 but it is waived if you purchase a bottle from them, which was good as we had brought a special bottle of Cabernet blend to try.  We purchased this bottle at Dean & DeLuca in Washington, DC, back in 2009.  The bottle commemorates President Obama’s 2009 inauguration, and most of the reviews we read about the wine were good, except for one from some guy named Ted Cruz. 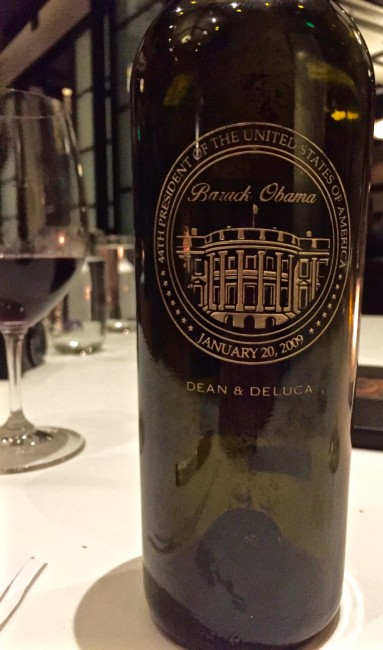 A bowl of fresh baked rolls (Manchego Cheese Rolls and Japanese Milk Bread) along with Japanese Squid Ink Baguettes was served together with three butters.  Mouthwatering!  It’s lucky I got a photo before all the rolls were gone. 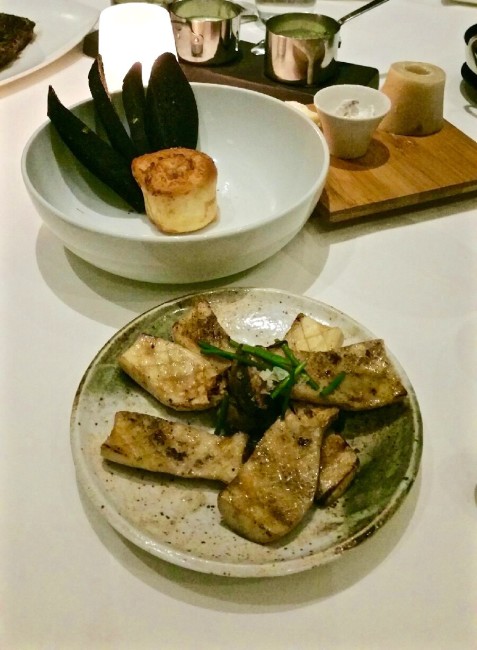 The honey butter served in a bone was delicious and a clever idea. 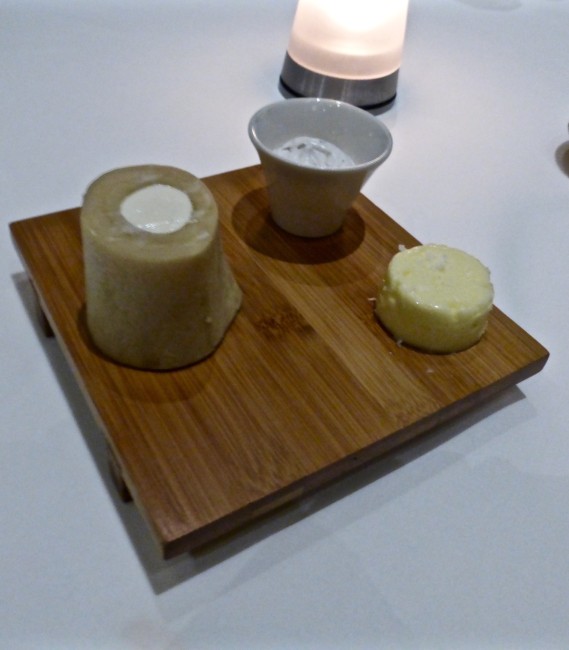 We started with the Chef’s Surprise, which on this evening was a potato tater tot topped with miso rémoulade. 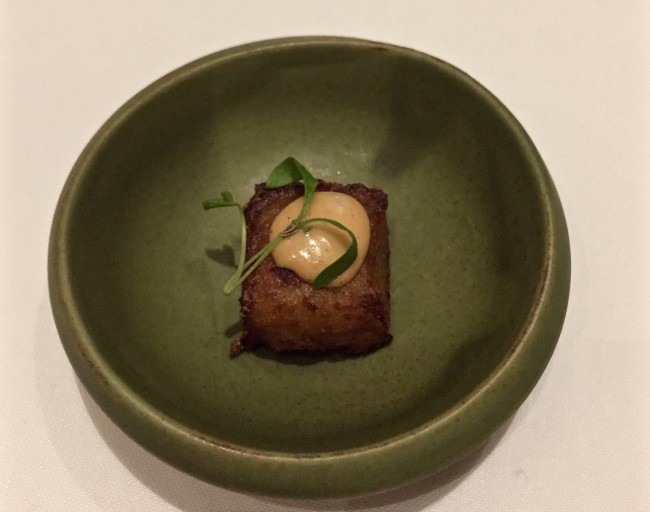 I started with the tartare of beef…frozen egg yolk marrow / puffed tendon / pickled ramps ($18).  Wow! if you like raw beef, try this one. It was fantastic. 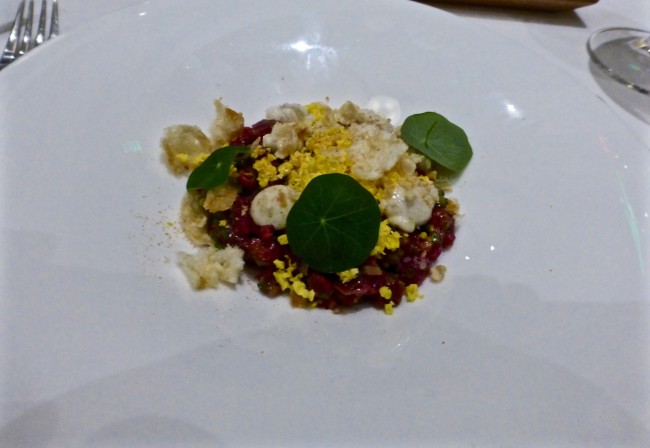 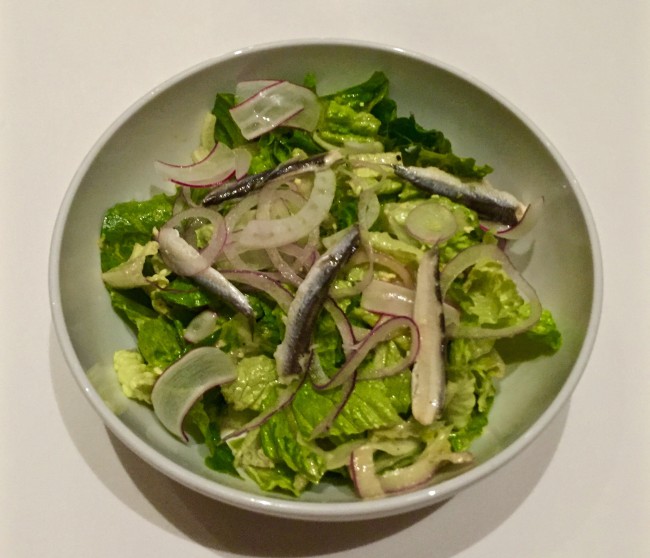 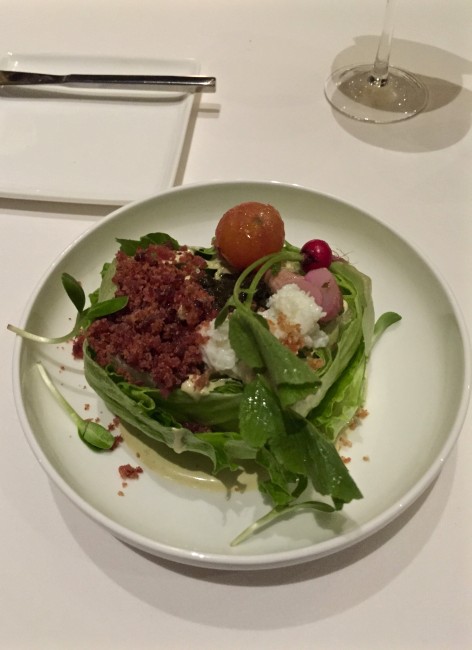 We had our eye on the 2 lb. Washugyu Wagyu Tomahawk US steak ($315 for 2 lbs. domestic wagyu dry-aged 28 days), but it was not to be as they were out of that particular cut of meat this evening. Plus it exceeded our gift card limit we had for that night.  Our server suggested that if you want this steak, confirm that it is available when you make your reservation.  She explained that they only receive half a cow once a month (there’s got to be a joke in there somewhere) of this particular beef which is why they can run out. The Washugyu Wagyu Tomahawk can be shared among many people to bring that cost down.

Speaking of sharing… because the steaks are giant, the ladies decided to share two of the 20 oz. Aurora angus ribeye chops…Illinois raised prime black angus ($65). 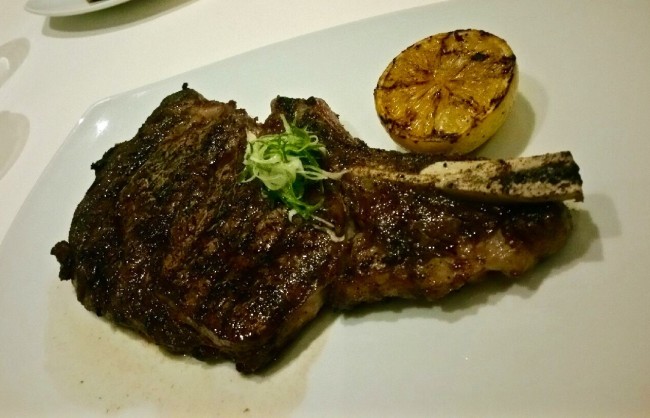 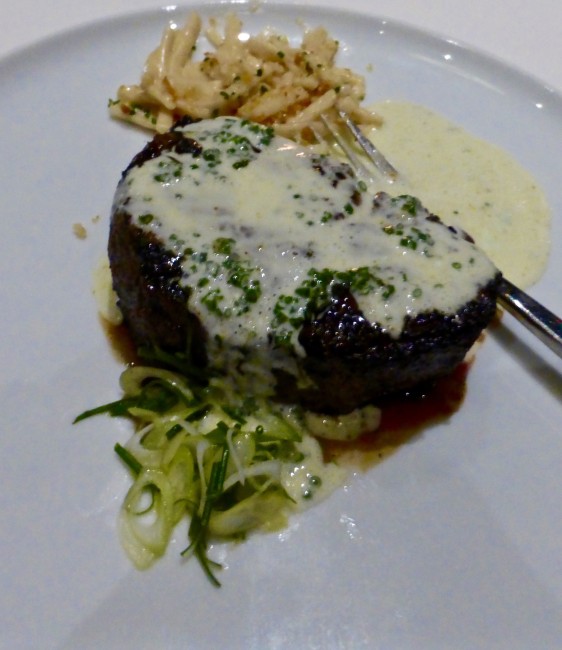 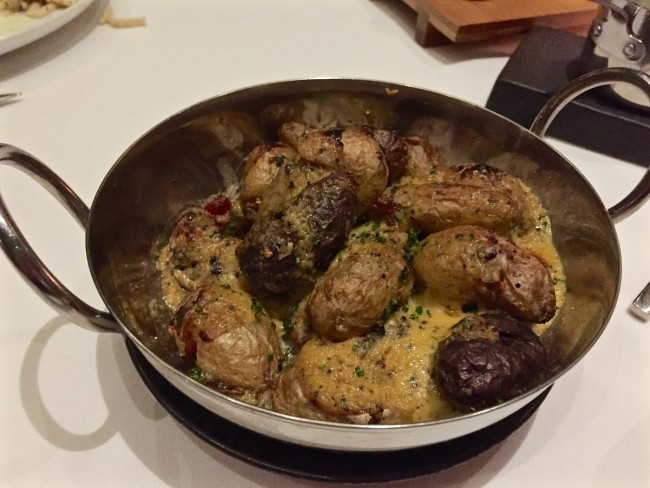 Both the mac and cheese (photo from Yelp) and truffled fingerling potatoes were outstanding.   Udon is a Japanese noodle which gave the mac and cheese a distinctly delicious flavor.   Sauces are separate, and we ordered Béarnaise sauce for the table (3 sauces for $6). 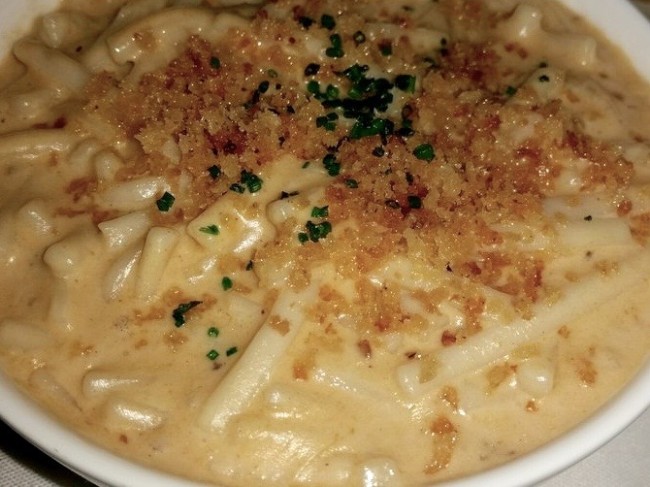 The steaks were followed by an intermezzo of cucumber sorbet with lime which was very refreshing. 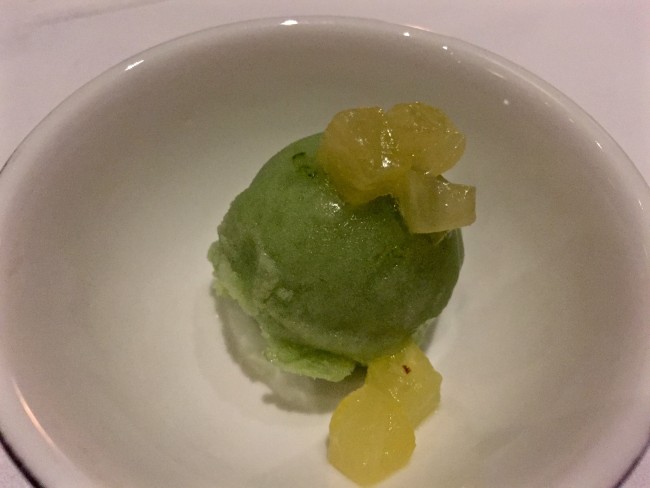 Despite the fact we were really full, we managed to order two desserts to share.   Pumpkin sticky toffee pudding…chicory bourbon toffee sauce / cranberry / pepita crumble / coffee – star anise ice cream ($12) and the cookies and cream soufflé ($15), which was accompanied by two mini ice cream sandwiches.   Jordan had highly recommended the soufflé and she did not steer (well, it is a steakhouse) us wrong, it was delicious. 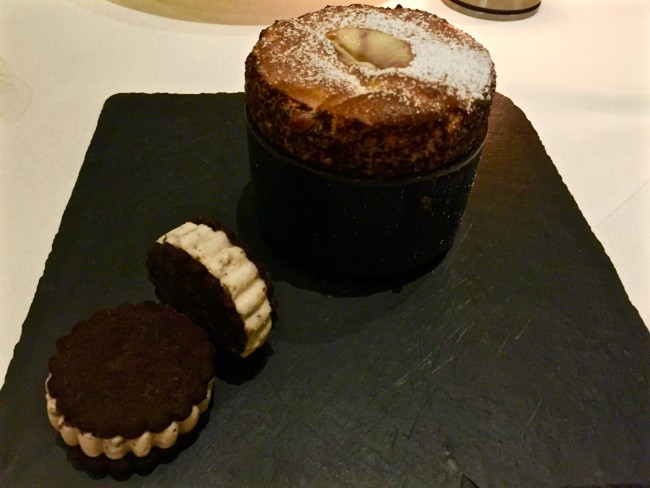 As dinner came to a close, our co-waiter returned once again, this time bearing trays with small cookies and candies.  He had won over Helen early by calling her, “Mi-lady.” 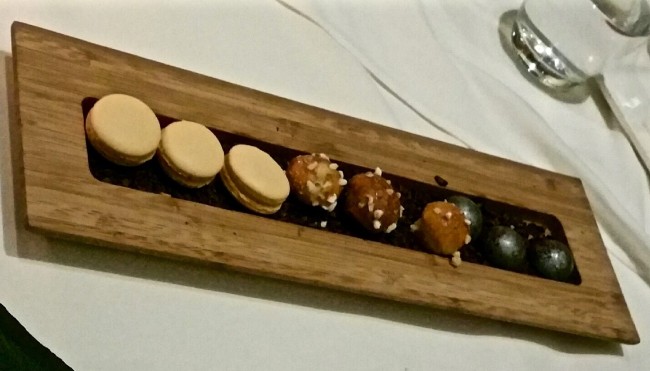 Tonight’s selection was an apricot orange macaron, chocolate cinnamon bon bon and a mini chouquette (a type of viennoiserie consisting of a small portion of choux pastry sprinkled with pearl sugar).  He also brought each of us a blond brownie to go (which we had for breakfast the next day).  The pastry chef outdid himself. 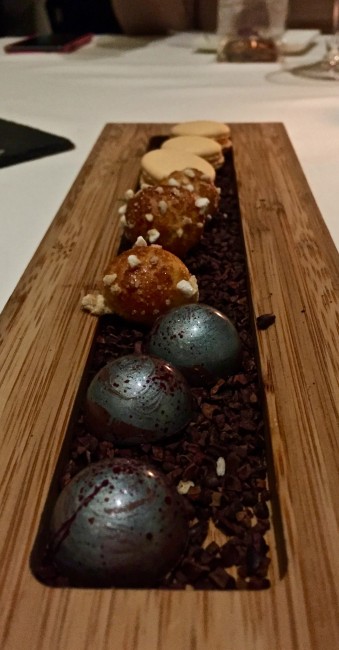 While we were paying the bill, the wine director, Andy, stopped by our table to chat and also to ask if he could display our empty wine bottle in their library as it was a commemorative bottle from President Obama’s first inauguration.  Andy regaled us with stories of their first restaurant in Cupertino, including some Silicon Valley tidbits (he had worked at the Cupertino restaurant…as had our server, Jordan).  I also gave Andy our “Obama Wine” bottle for their collection.

We took one last look out at City Hall, and we were on our way. 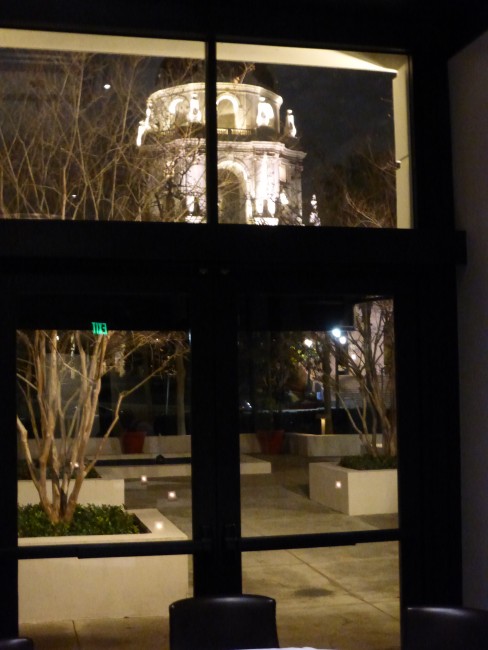 You won’t get out of here without a hit to the pocketbook, but for a special occasion or if you’re just in the mood for a scrumptious steak, you can’t beat Alexander’s Steakhouse. Sometime in the near future, we’re going to round up some carnivorous friends for that Washugyu Wagyu Tomahawk US steak. Vegetarians need not apply for that evening!